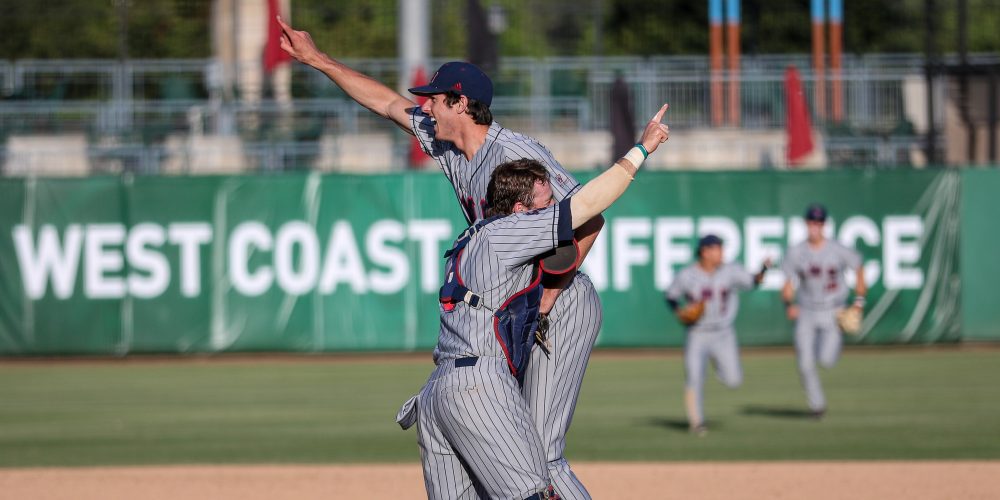 He was drenched in Gatorade and having to roll through a handful of media requests, but he was beaming. Cooper Uhl’s two-run triple in the 10th inning Saturday afternoon had pushed Gill’s Loyola Marymount Lions past Saint Mary’s, 4-2. They had won the West Coast Conference tournament and secured the WCC’s automatic berth into the NCAA tournament.

“Emotionally I’m on a pretty big high right now,” Gill said. “These guys are unbelievable. They were picked to finish seventh in our conference and we just won the conference tournament. I’m pretty proud of them.”

There were plenty of tense moments. There always are for Loyola Marymount and the Lions’ small ball approach, relying on pitching and defense to carry them. They hit .310 for the tournament, but struggled to come up with many clutch hits. Their team average dipped to .278 with runners on base and .216 with runners in scoring position. They were 0 for 5 on the weekend with the bases loaded, including hitting into a triple play.

But Loyola Marymount did just enough offensively. They got one big hit when they needed it the most and they completed what has evaded the program for 18 years, including the last 11 under Gill. The Lions hoisted the conference trophy after finishing an unblemished 3-0 run through the tournament.

“It’s awesome. We weren’t supposed to be at this tournament,” junior first baseman Trevin Esquerra said. “We came here, played loose, had fun and we did it. And we’re not done yet.” 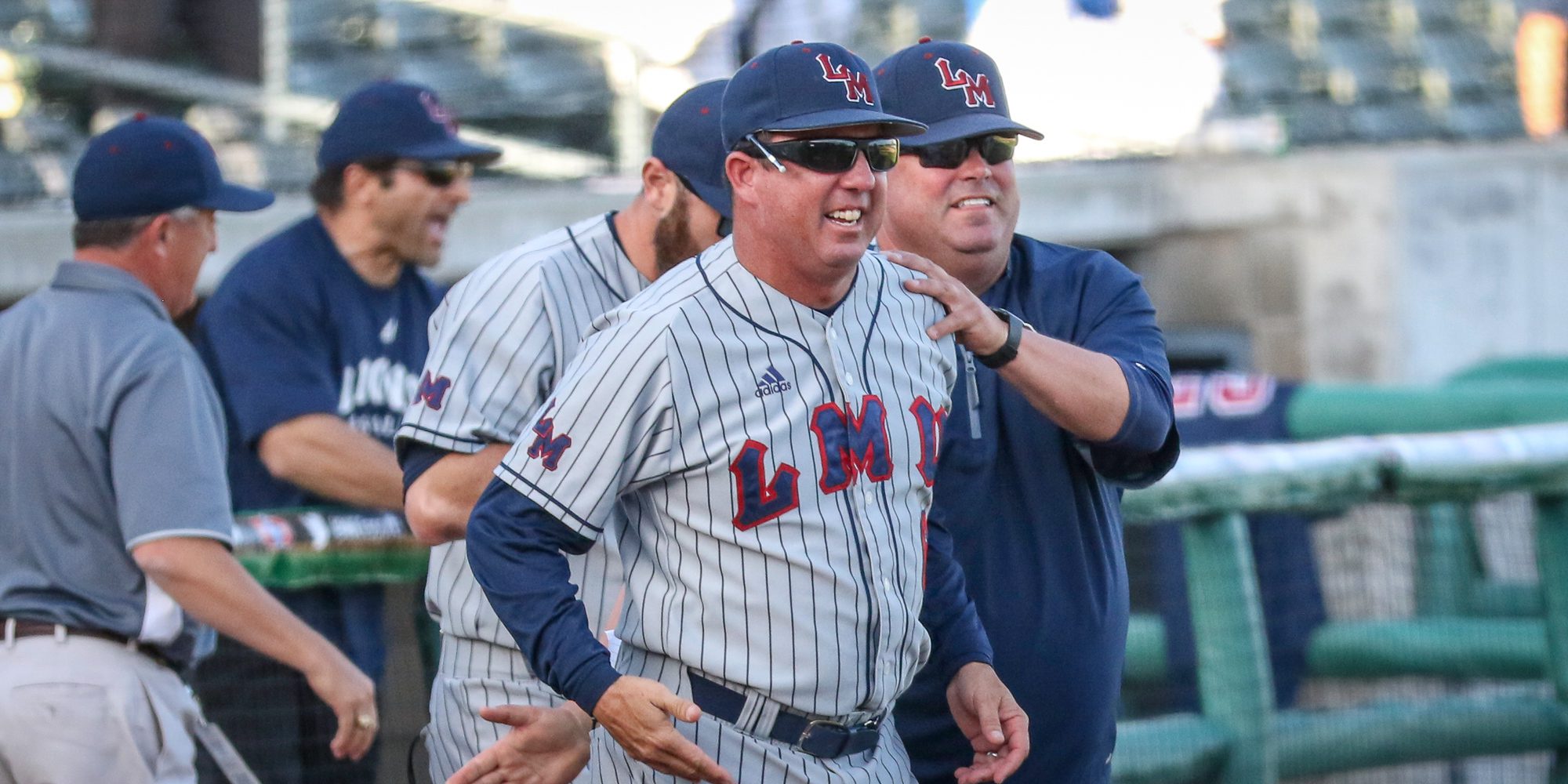 The Lions needed help to even get in the tournament this year. They lost their final four conference series and would not have qualified for the trip to Stockton had Pepperdine won its final series against Saint Mary’s. The Gaels twice rallied to tie the penultimate game and won with two runs in the ninth before beating Pepperdine soundly in the finale, pushing LMU to the fourth seed.

“Our confidence was down a little bit,” Gill said. “When we got into this tournament, I felt like we were kind of renewed a little bit, like hey we got a new season.”

The Lions took advantage and now they’re finally heading to a regional, something the program has been building toward.

“The players that came here before started this standard of making it to this [WCC] tournament. It would be a disappointing season for any team that I coach not to,” Gill said. “The next step and we talked about it a lot this year was getting past that and getting to the NCAA tournament and setting a new standard for future Lions. The standard has been set now in my tenure that this is what we aim for and this is what we try for every year.” 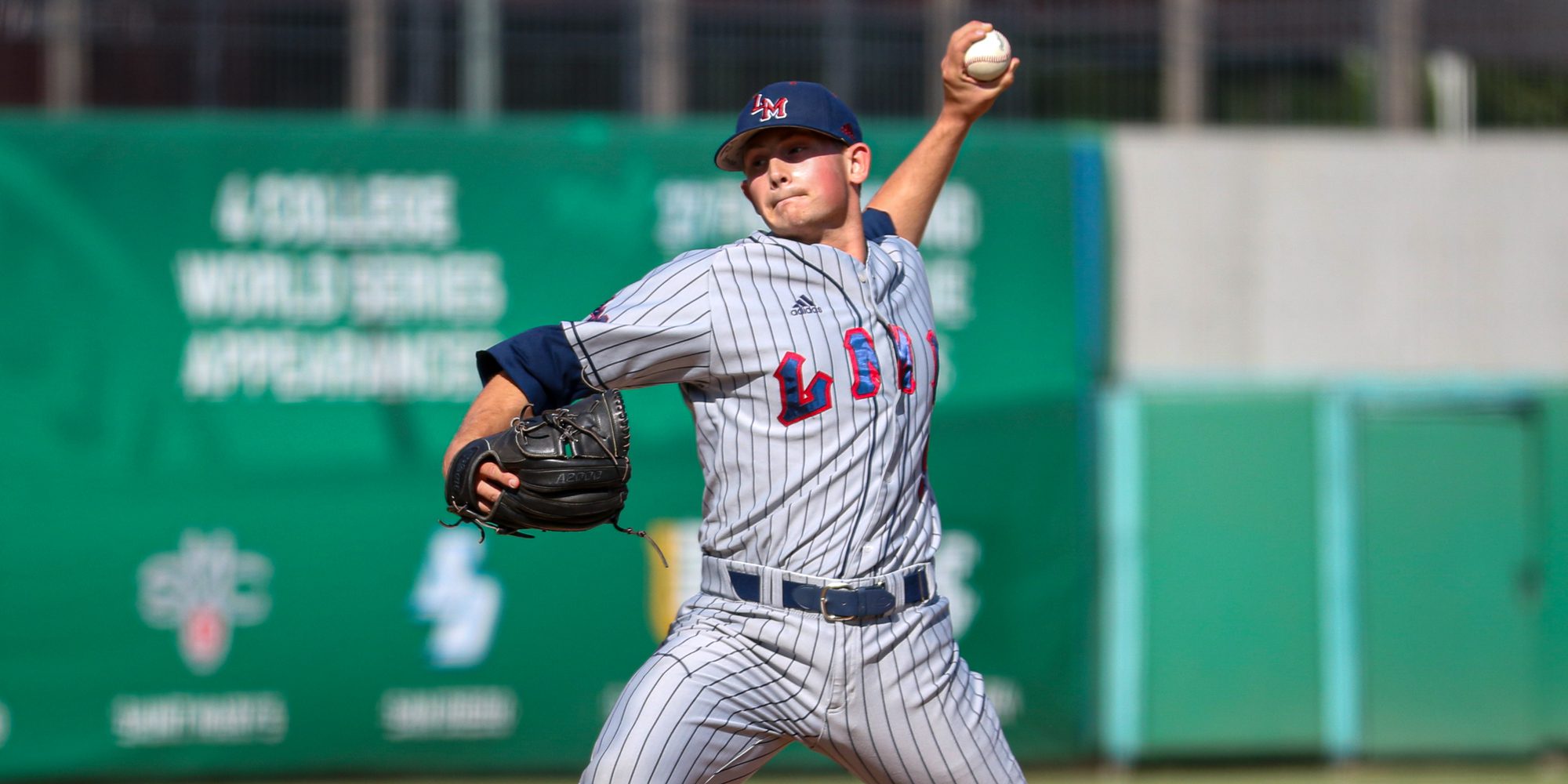 The story of the weekend was Loyola Marymount’s pitching staff. The Lions used just five pitchers and allowed only five runs on 15 hits.

The dominance started with WCC Pitcher of the Year Codie Paiva throwing a 132-pitch complete game in a 4-1 win over top-seed BYU. Eighty eight of his pitches were strikes as he struck out 11, earning him tournament MVP. Paiva going the distance changed the dynamic of the tournament. The Lions were able to save Nick Frasso and then threw him for the final three innings of Friday evening’s 3-2 win over the Gaels. That left them with a complement of seven pitchers for Saturday’s potential two games.

Lefthander Matt Voelker had been the third starter for LMU after Frasso had moved to the bullpen and assumed the closer role Voelker had been in. He was assumed to be the starter for Saturday’s championship game. But Voelker had been roughed up when he started against Saint Mary’s earlier in the year, giving up five runs in three innings, so Gill instead turned the ball to righty CJ Fernandezees to make his third start of the year. The coaching staff liked the matchup with Fernandezees breaking ball against the Gaels’ lineup that featured eight righthanders.

Voelker would get his chance though.

Fernandezees only allowed one hit through the first four innings. Things began to unravel a bit in the fifth. A routine fly ball to left field turned into a leadoff double for Austin Chauvin when it was lost in the sun. Bryce Willits perfectly bounced a ball just out of the reach of LMU’s first and second basemen to score Chauvin and tie the score, 1-1. When Fernandezees walked JC Santini, Loyola Marymount went to Voelker.

A passed ball put two runners in scoring position and the bases were eventually loaded by an intentional walk to Joe Vranesh. Voelker proceeded to get a line out, a fly out and a strikeout. A run scored on the fly ball, briefly putting Saint Mary’s ahead 2-1, but Voelker had rescued LMU from a big jam.

The Lions got the run back in the next half inning with two walks and two fly outs. Voelker then threw up four zeroes.

“He’s been working on a lot of the control and getting on top of the ball and today found a groove and just went after it,” said Lions catcher Uhl. 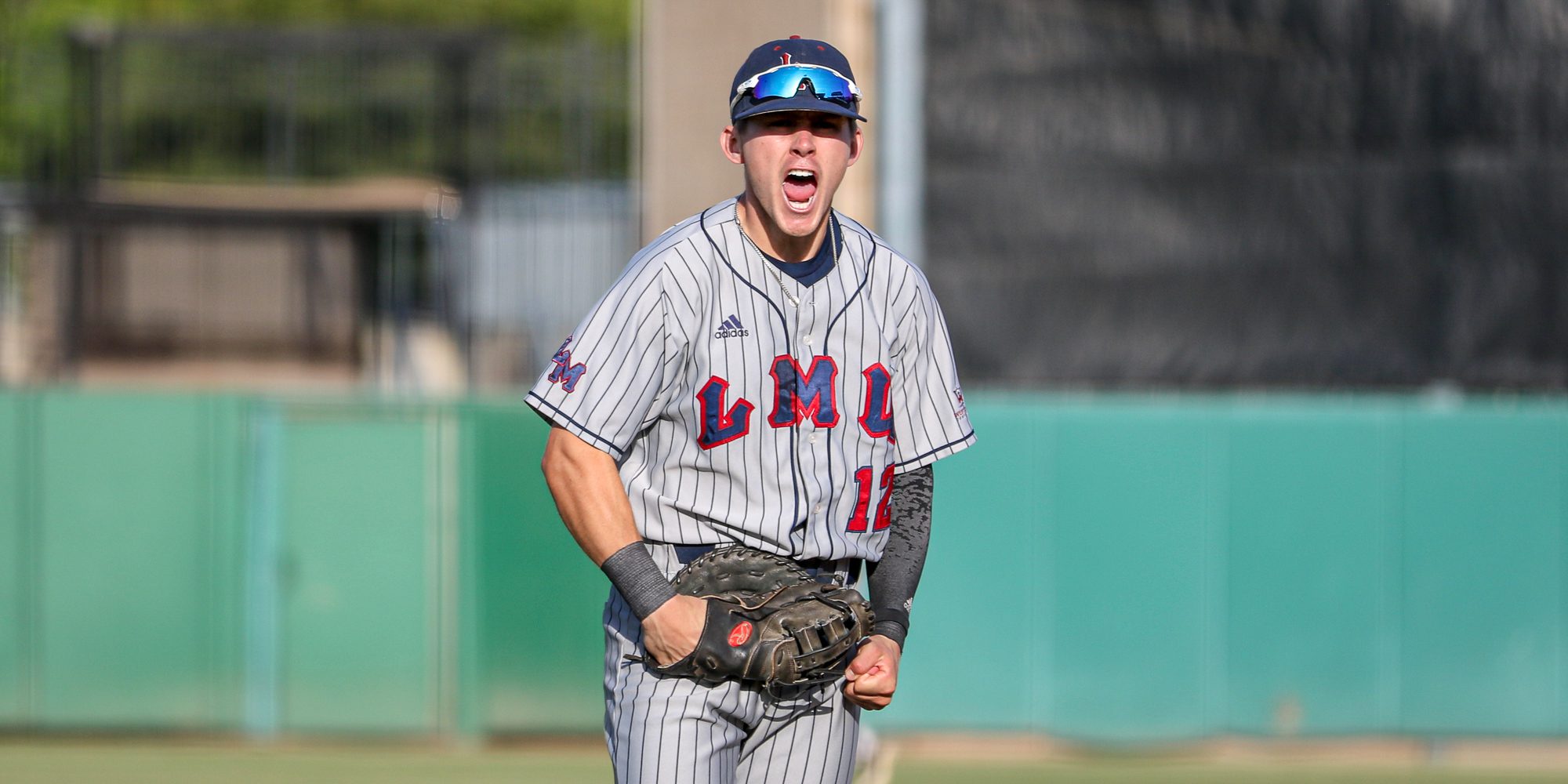 Voelker’s stat line got a big bump from Esquerra in the ninth inning. Austin Chauvin nearly ended the game with one swing, swatting a first-pitch leadoff double off the top of the left-center field wall.

Esquerra made the play of the tournament a few pitches later. Bryce Willits chopped a ball to first. Without hesitation, Esquerra snagged it and whipped a throw to third base where Brandon Shearer applied the tag, cutting down pinch runner Jack McCarthy.

“I got it clean and I saw that he had just started going,” Esquerra said. “I thought I had enough time to throw it to B[randon Shearer] and I just played catch with it.”

Gill was in disbelief as was the Saint Mary’s dugout. Esquerra made sure to scream his celebration toward the Gaels.

“I don’t think I’ve seen that play since I was in fifth grade. It was unbelievable awareness and his sense to throw that guy out,” Gill said. “We don’t practice that. I can promise you that. That was straight baseball instincts by him. He saw it. He saw the guy out of the corner of his eye.

“That was obviously the turning point of the game. They’re the home team. To have a runner on third with one out, who knows what’s going to happen, but there’s pretty good odds the guy is going to touch home plate.”

The first-to-third putout is rare in baseball, so while it was unexpected, it was not surprising to Gill that Esquerra came through with an important play. Esquerra (.335, 16, 57) has been the heart of the Loyola Marymount lineup, leading the team in average, hits, runs, doubles, home runs, RBIs, total bases and slugging percentage. 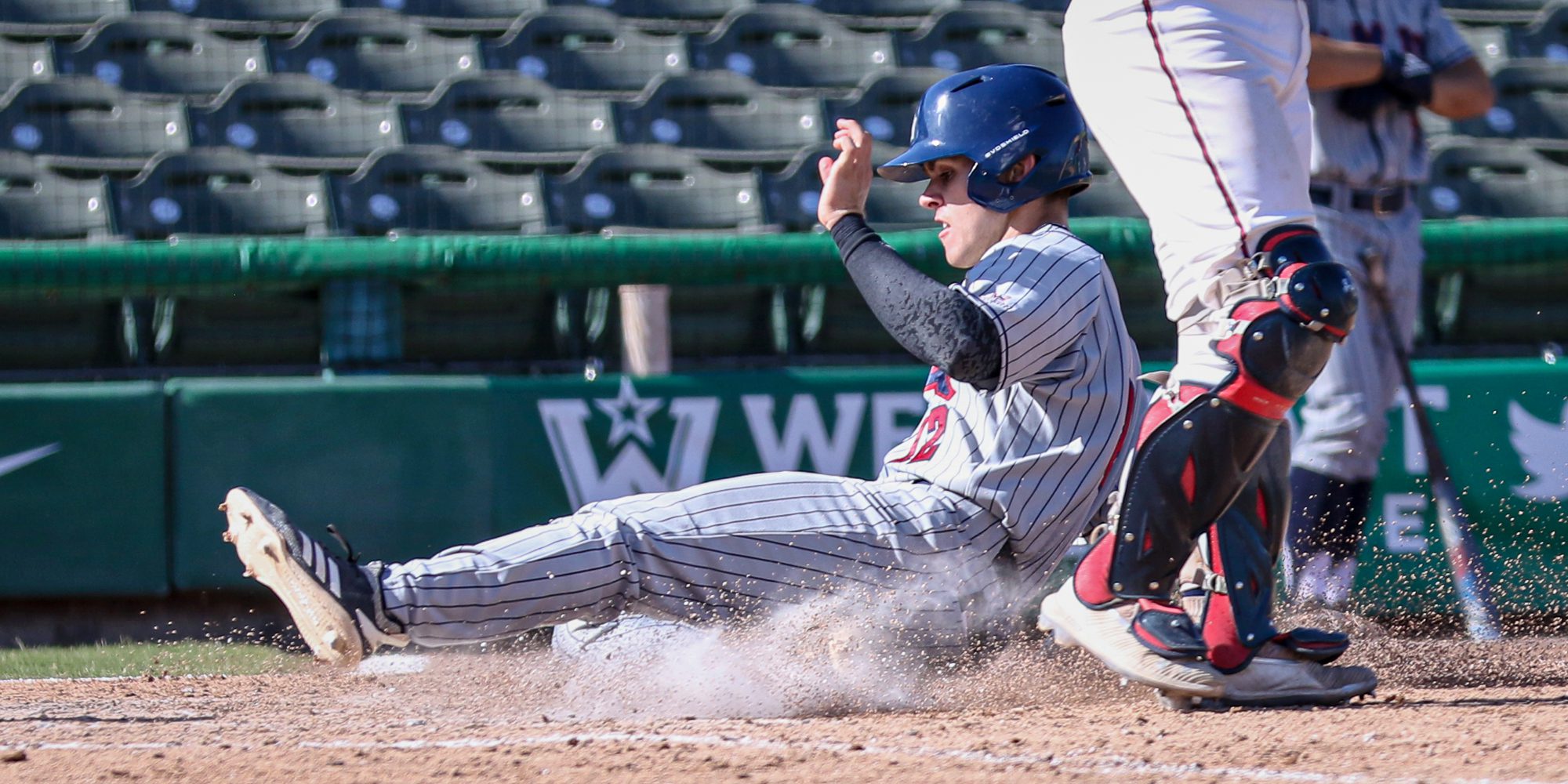 “I’m just trusting the process and doing things for my team especially,” Esquerra said. “Just focusing on the team and doing whatever I can to help win.”

This weekend he did a lot. Esquerra could have easily been named tournament MVP.

“I’ll tell you what, he’s a big-game player,” Gill said. “Every game we felt like it was a do or die, two out of three, we’ve got to win it, he showed up. Every time. He’s a big-game player. Stuff you can’t teach. I can’t say enough about him. I’m so proud of him. I’m glad he’s on our team.”

Saint Mary’s head coach Eric Valenzuela talks about the Gaels’ 4-2 loss to LMU in the WCC Tournament title game and how his team fought through the loser’s bracket to get to the finals.

Valenzuela also discusses the outing of starting pitcher Kevin Milam, who looked like his vintage self, and the impact of catcher JC Santini throwing out baserunners and working with the pitching staff:

Loyola Marymount catcher Cooper Uhl talks about his game-winning hit in the 10th inning, driving a two-run triple into the right-center field gap:

– Gill credited the players from the half-decade of teams before this one that haven’t made a regional: “This isn’t just this team. These guys were also taught by guys from last year and the year before. That’s been carried on since [David] Fletcher was with us. Those guys bought in and we’ve been playing good baseball ever since. That’s a big deal.”

– “I thought we fought all weekend,” Saint Mary’s head coach Eric Valenzuela said. “Being in that losers’ bracket is tough. I’m proud of my team. We had a very, very good season. Obviously, you want to get into postseason and to a regional and beyond that and we’ll be back. We’ll be back for sure. Congrats to Coach Gill and his team. They did a great job and they earned it.” 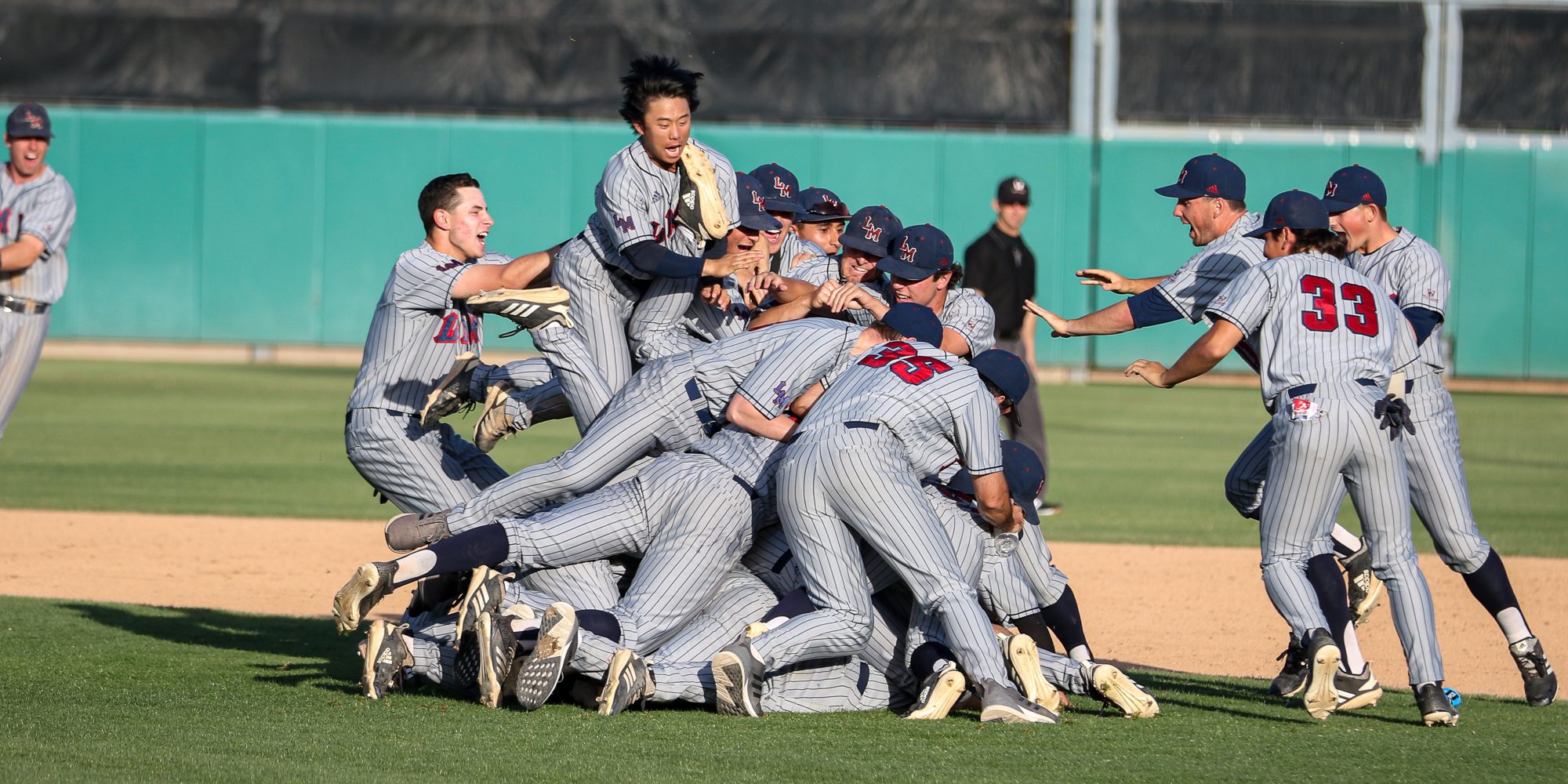 The Lion Pride jumps atop one another. (Shotgun Spratling) 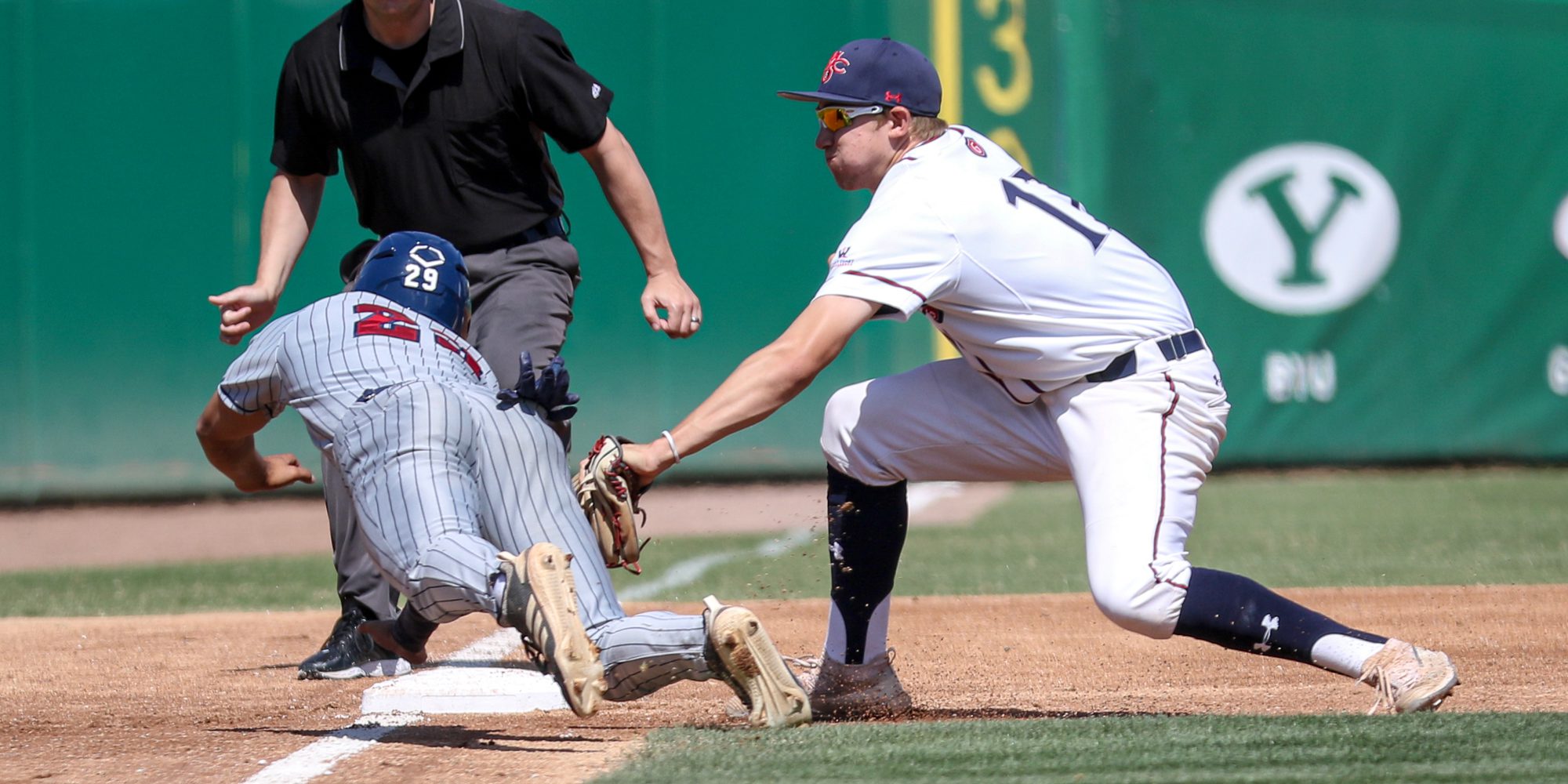 Tommy Delgado is tagged out by Bryce Willits on a backpick from catcher JC Santini. (Shotgun Spratling) 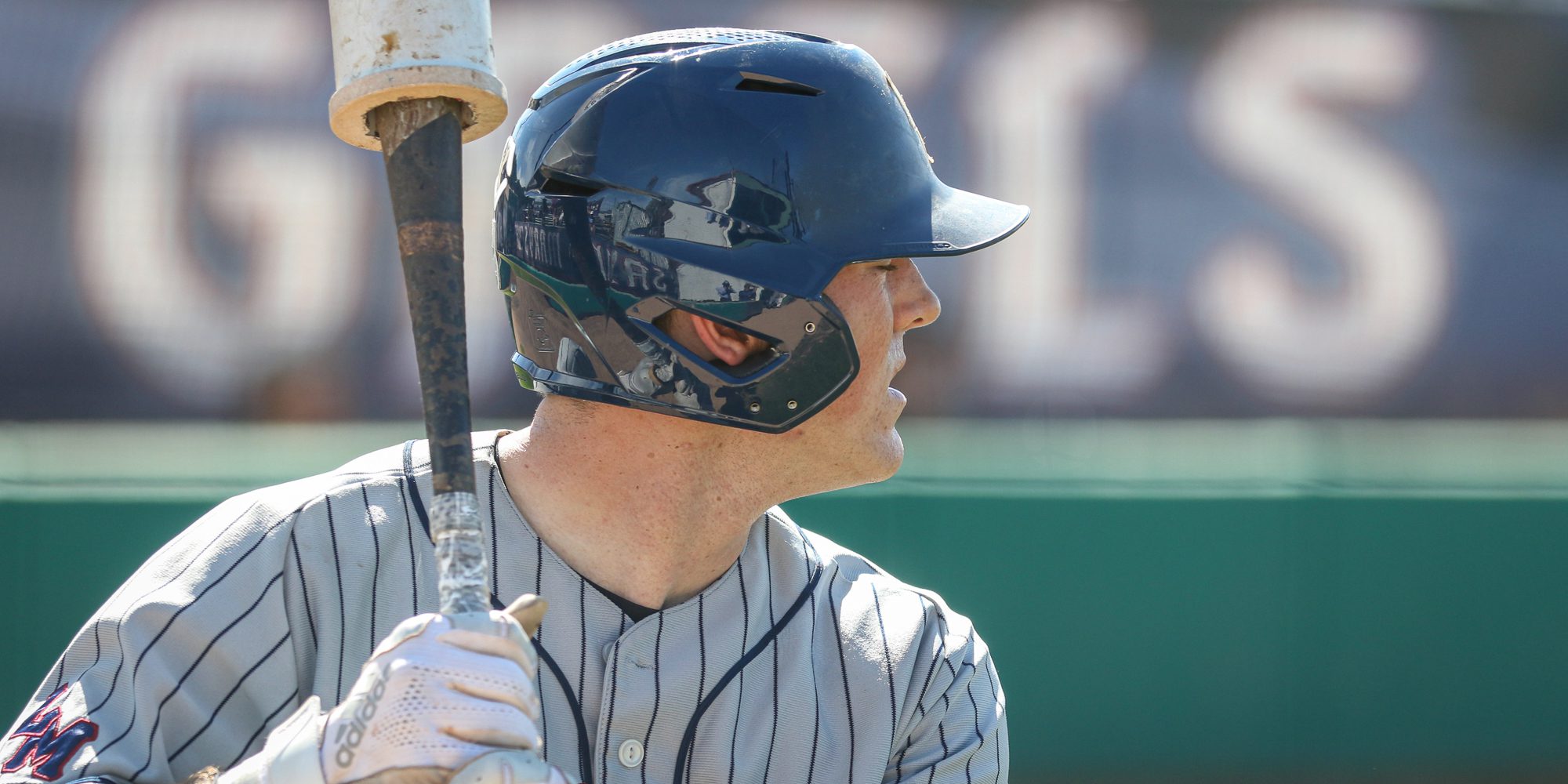 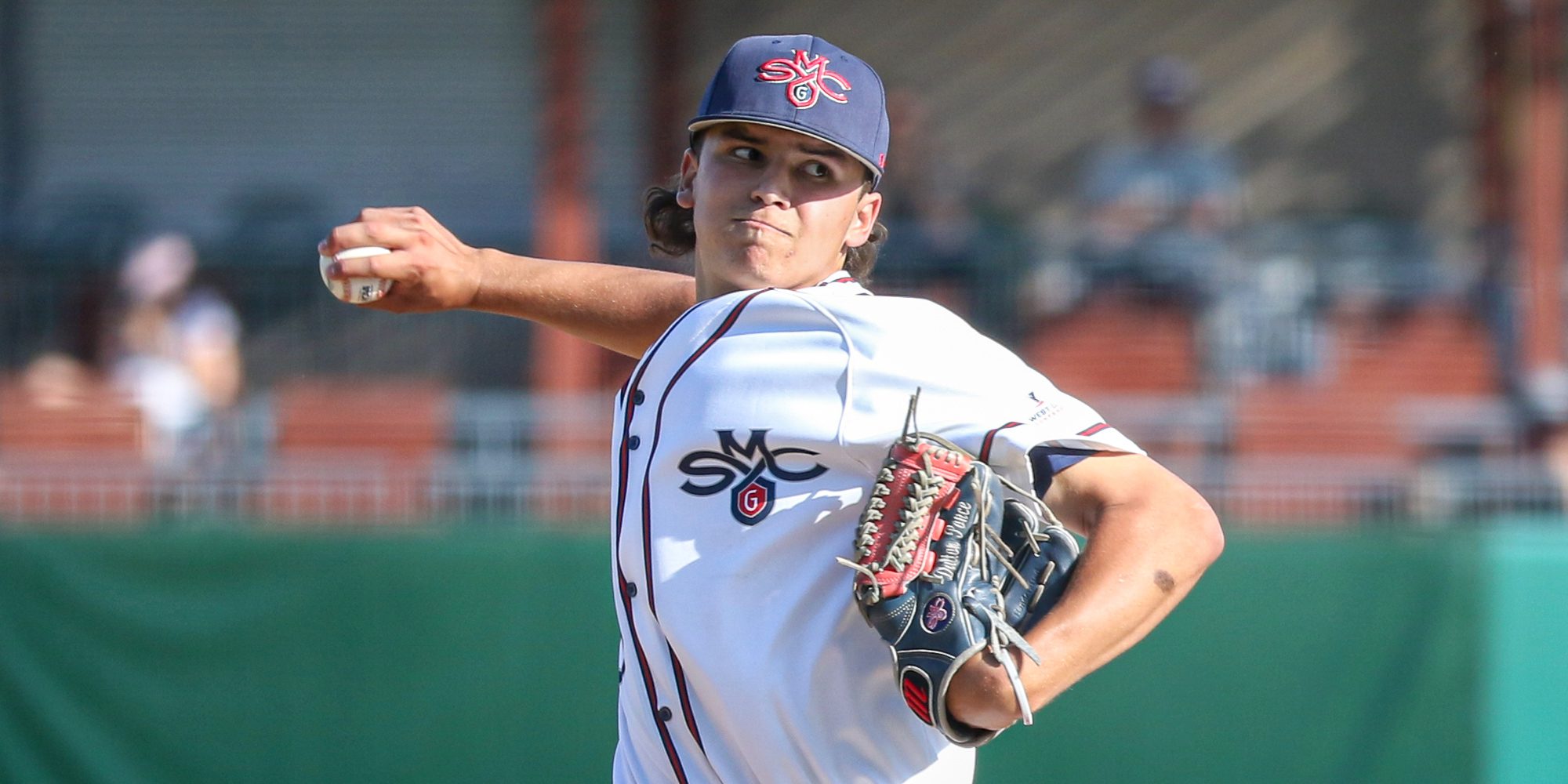 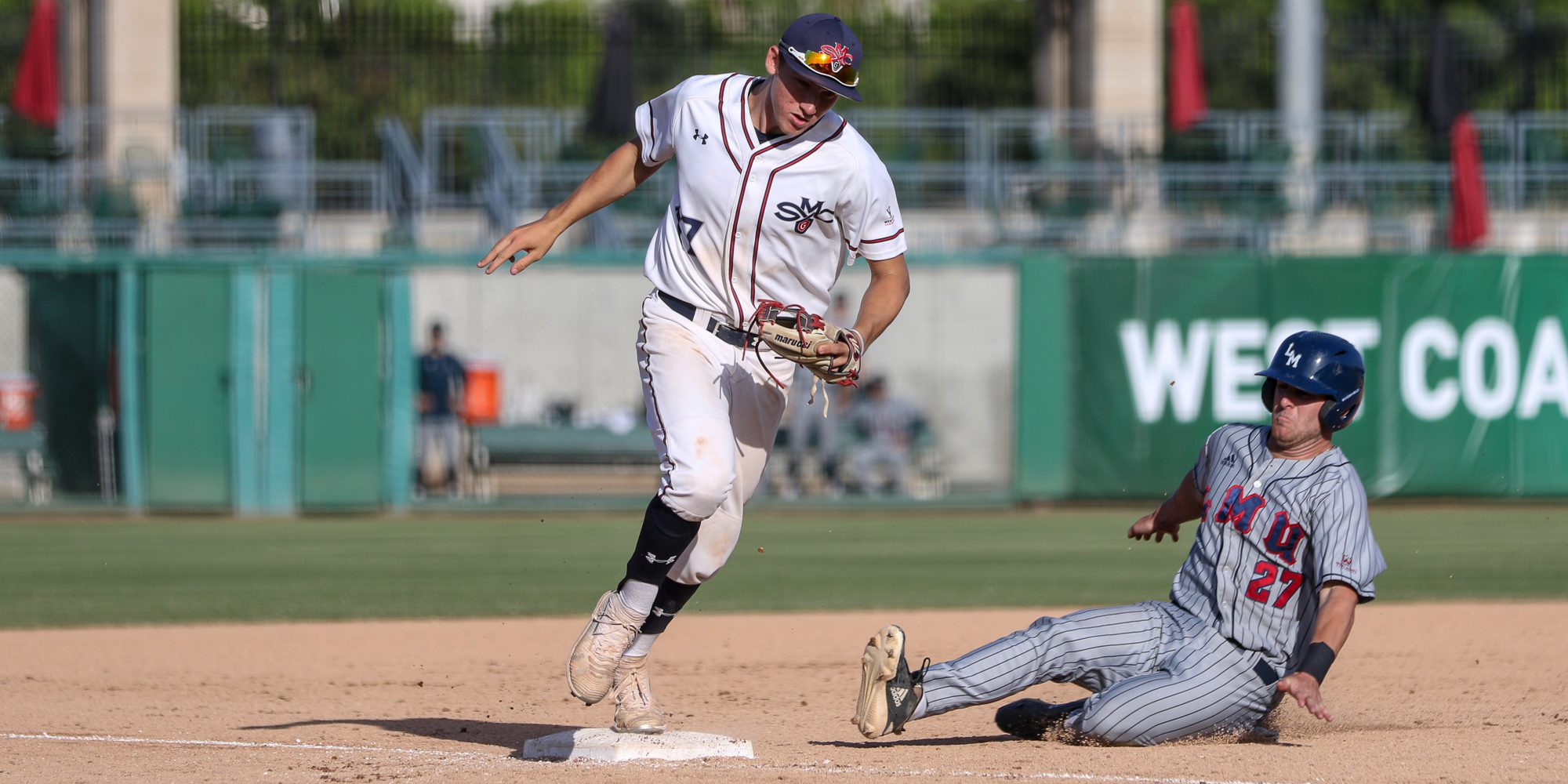