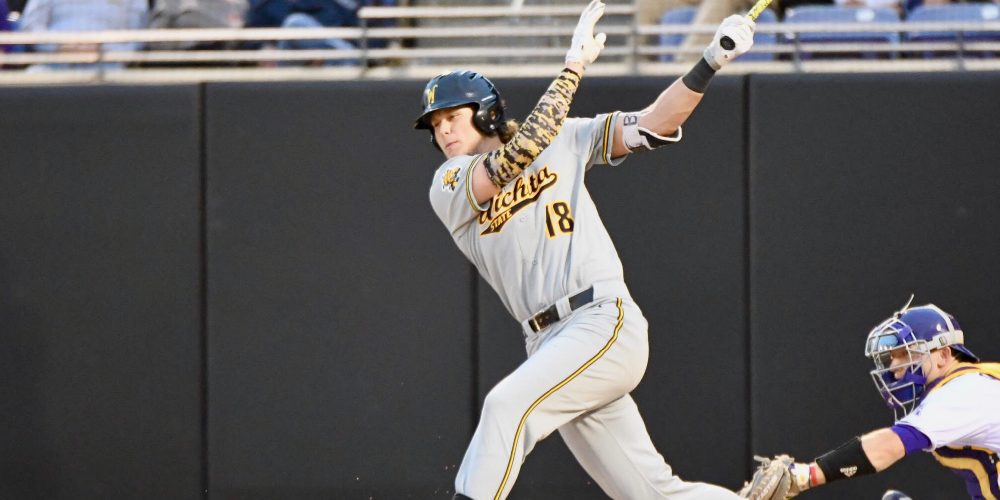 In the first inning of Wichita State’s first-ever AAC game Thursday at East Carolina, Bohm announced his presence by launching a towering solo home run to right-center field off Pirates ace Trey Benton. It turned out, that was just Bohm’s opening salvo.

Bohm, a junior third baseman who rates as one of college baseball’s top hitting prospects, showed Thursday why he’s regarded as a strong candidate to be drafted in the first round this June. A long-levered 6-foot-5, 220-pound righthanded slugger, Bohm has serious leverage in his swing that translates to enormous raw power — but he’s also a disciplined hitter with uncommon control of the strike zone, as evidenced by his 18-8 BB-K mark through 22 games this year. In his second at-bat Thursday, he battled the count full against Benton, then pulled a two-run double down the left-field line to give Wichita a 4-1 cushion, helping to propel the Shockers to an emphatic 14-3 blowout victory.

But Bohm wasn’t done — far from it. He drew a walk and scored a run in the sixth. He lined a hard single to right-center and scored again in the eighth. And he capped his night with a second majestic homer to right-center in the ninth — a three-run shot that put an exclamation point on a 4-for-5, six-RBI night.

After hitting .351 with five homers and 28 RBIs in the Cape Cod League last summer and sharing D1Baseball’s Summer Breakout Prospect award with Wichita teammate Greyson Jenista, Bohm is well on his way to his best spring season yet, hitting .360/.472/.698 with seven homers, eight doubles and 28 RBIs in 23 games. He was a consistent run producer over his first two college seasons; now he’s a bona fide college baseball superstar.