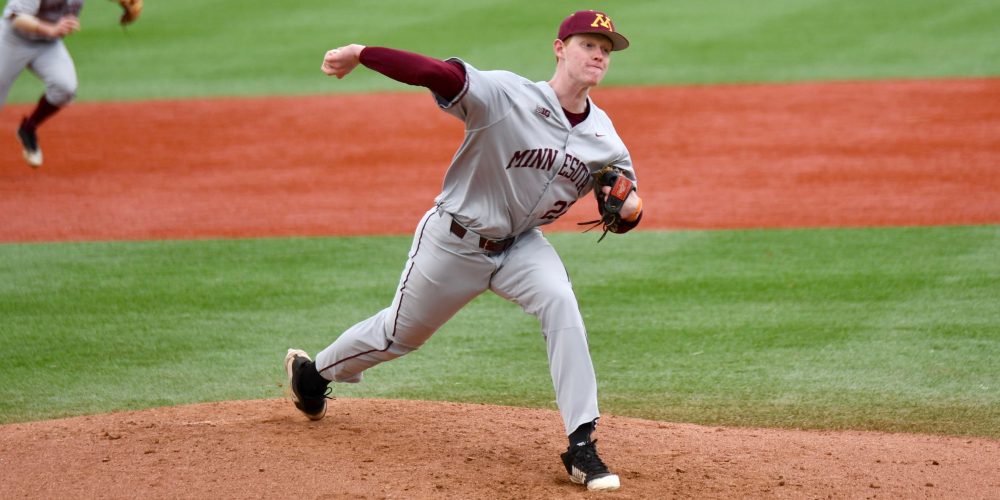 COLUMBUS, Ohio — With a lineup jam-packed with mature upperclassmen, Minnesota’s coaches knew the Gophers were going to hit this spring. They knew the Gophers would execute offensively and take good care of the baseball on defense.

What they didn’t know was what to expect from their young pitching staff. This team has a Big Ten title-caliber lineup, but ultimately its fortunes would be determined by how quickly its exciting group of freshman arms matured.

Those young pitchers grew up faster than the Gophers could have possibly hoped, and that’s a huge reason Minnesota is 28-11 overall and 11-2 in the Big Ten after clinching a big road series with a 2-1 win Saturday at Ohio State. A pair of freshmen did all the work on the mound, as righthander Patrick Fredrickson delivered eight innings of one-run ball and tied a career high with seven strikeouts, and fellow righty Max Meyer notched his 11th save by stranding two runners in the ninth.

It didn’t take long this season for Minnesota to realize that Fredrickson, Sunday starter Sam Thoreson and Meyer were ready for the big time.

“I can’t remember in my career when I’ve had two starters who were freshmen and a closer that was a freshman, to be honest with you, and that was a big question mark for us coming into the year,” Minnesota coach John Anderson said. “We thought we had an experienced position player team, we could play some defense, thought we could put together some pretty good at-bats. We just didn’t know what was gonna happen with our pitching staff.”