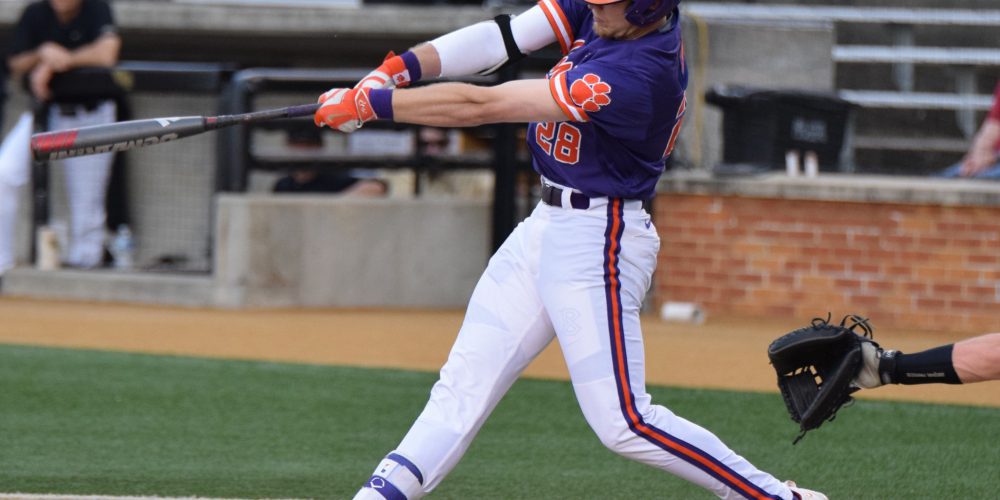 It didn’t take long for Clemson coach Monte Lee to figure out freshman outfielder Seth Beer was potentially one of a kind.

Actually, it took just three weeks for the first-year head coach to marvel about the impressive-looking youngster who was taking college baseball by storm. Just a year ago, LSU righthander Alex Lange put together a campaign that almost earned him D1Baseball.com National Player of the Year honors, while also helping lead Louisiana’s Tigers to the College World Series. Though he fell just short over overall MVP honors, he was clearly the cream of the crop in the freshman class and earned our Freshman of the Year honor.

This year, it was Beer that worked his magic, helping lead South Carolina’s Tigers to a memorable first season under Lee – one that ended a top eight national seed and a regional host, something that most certainly sets the foundation for the future.

But for Beer, his first statement came during the annual series against South Carolina. In that series, he went just 3-for-7 (.429) with a home run and an RBI, missing much of the series finale because of an injury. But the statement was made. For starters, Beer, a 6-foot-2, 195 pounds, made a strong first impression from a physical standpoint. Then, everything about his skill set screamed a budding star. Beer had a mature approach at the plate, and everything off his bat jumped with authority and almost perfectly on the barrel of the bat.

Here’s what I said about Beer after the series against the Gamecocks: “Seth Beer is going to be an absolute monster for the Tigers throughout his career. Beer, of course, garnered a lot of warranted attention when he decided to enroll early to begin his collegiate career. Well, the 6-foot-2, 195-pounder, looks like anything but a pup physically, and the ball just comes off his bat differently. Beer hit .429 in seven at bats in the series and has all the tools needed to be an elite college baseball player.”

The South Carolina series, which the Tigers won two games to one, set the tone for Clemson’s success and Beer’s ascension as one of the premier players in college baseball and D1Baseball’s National Freshman of the Year.

“Best I’ve ever seen, best hitter,” Lee said in Aaron Fitt’s story back in March. “I’m telling you right now, I’ve told anybody that’s asked me, I’m not afraid to say it. I know we’re only 13 games into the season and he’s a true freshman, but I have never seen anybody that hits like this guy — never. Not in 16, 17 years of coaching. I’ve had some guys that have played in the big leagues, I’ve coached first-round draft picks. This guy is the best hitter that I have seen. You make a mistake and he punishes you. He hit two home runs opposite field, he hit one straightaway center field. He’s unbelievable. The way he carries himself, he’s so even-keeled. When he does have a bad at-bat, which isn’t very often, he’s very even-keeled, very confident, great teammate. He’s just the total package.”

It will be difficult for Beer to emulate the success he had as a freshman, but nothing would surprise us. He’s a driven player who has all the tools to be one of the best to ever play college baseball. He finished the season with a .369 batting average, 13 doubles, a whopping 18 homers and 70 RBIs, along with a .535 OBP, .700 SLG and of course a 1.235 OPS, which ranked fourth nationally behind Kyle Lewis, Will Craig and Jameson Fisher – not bad company for a first-year player.

It was a year to remember for the Suwanee, Ga., native, and he headlines our impressive crop of Freshman All-Americans.