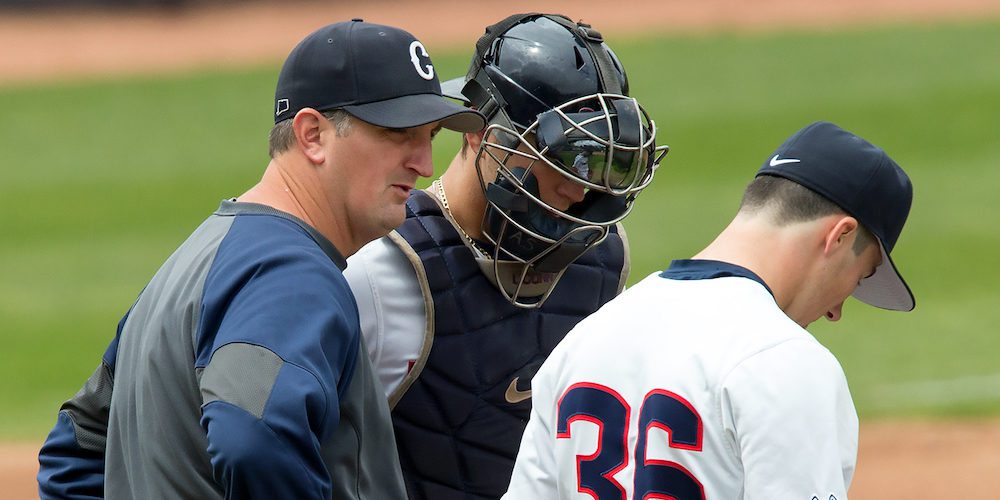 Go to any ballpark when Connecticut is playing, and it’s not hard to spot or hear Huskies top assistant, recruiting coordinator and pitching coach Josh MacDonald.

A few years ago, UConn was playing a road series against Houston. It was humid, rain had just moved through the area and there weren’t a lot of fans in the stands at Cougar Field. So as the game progressed, the stands were in relative silence, while both the Cougars and Huskies coaching staffs were instructing as they always do in-game. One voice in particular — MacDonald’s — stood out amongst the rest. It was a booming voice, it might have sounded a little brash, but as his pitchers would trot off the field between innings, that loud, commanding voice would soften and the instruction in the dugout would ensue.

That sequence is Josh MacDonald, 40, in a nutshell. And that approach has proven the test of time, as MacDonald, who recently completed his 11th season on the Huskies’ coaching staff, has helped UConn develop into one of the nation’s admired programs. Despite some challenges from a geographic standpoint, the Huskies have made the NCAA tournament in seven of MacDonald’s 11 season with the program, and they’ve made the super regional round twice — the last coming this past June when they faced off against Stanford.

MacDonald’s evaluation skills as a recruiter are elite. He’s a no-nonsense guy and his ability to evaluate makeups of players is superb — so says his boss, head coach Jim Penders. But beyond his ability to recruit is his exceptional ability to crank out premier pitchers and develop good-to-great pitching staffs on a regular basis.

MacDonald is one of the big reasons for UConn’s rise, and he’s a guy who has overcome his own personal obstacles on more than one occasion. For that and more, he’s the 2022 D1Baseball Assistant of the Year.

“Josh’s secret sauce is that kids know he cares about them, and I think he recognizes that. He had a lot of coaches and teachers who really cared about him during some difficult times in his life, so he knows full well what kind of a difference those kinds of relationships can make on a lot of kids,” Penders said. “He’s a great coach, but he’s a guy who cultivates awesome relationships, too. He had a terrific relationship with a guy like catcher Matt Donlan this year, and that really ended up paying off for the entire team.

“He’s a guy with a magnetic personality, and people naturally just want to be around him. He knows mechanics — he downplays how much he really teaches that — he’s the type of guy who says he can just watch a pitcher and see things. But he’s a very good evaluator at heart because he has such a big heart, and he has the competitive gene.

“If you don’t have that, let’s just say you won’t last long with Josh MacDonald,” he added. “You better try to match his competitiveness, and that’s something the kids are really drawn to. Whether it’s baseball or pickup basketball, it’s never turned off for Josh. He’s competitive in literally everything he does in life.”

Like many people, Joshua MacDonald has never had anything easy in his life. Sure, he has had a lot of success as a coach, and as a former high school and college baseball player. But he’s also had his own personal trials and tribulations to overcome.

The toughness you see today, to an extent, is a direct result of some trauma he felt as a 15-year-old kid and freshman at Notre Dame High School in West Haven, Conn. As Josh and his father Dave were getting ready to head to his Babe Ruth League baseball game early in the summer, his dad fell over in the kitchen. The family called 9-1-1, but an hour later, he was dead from a heart attack. He was only 46.

He passed away on Father’s Day.

As with any teenager in that situation, MacDonald had a million questions. But he had more than a few people step up to support him during those tough times. His mother Regina, as Penders explained, was tough as nails — perhaps more so than Josh. He also received a wealth of support from administrators at Notre Dame, including Joe Tonelli Sr., who would often give MacDonald rides to wherever he needed to go.

Despite the tough situation with the loss of his father, MacDonald went on to have a decorated high school career. He was a standout in football and baseball, and Penders was first tipped off about MacDonald by a good friend of his, Gianni Ragaini, who coached MacDonald during his freshmen and sophomore years in high school.

“The first time I had heard about him, Gianni reached out sand said you must come see this kid throw. He had a unique competitive spirit, and there was no denying that the first time I saw him pitch,” Penders said. “He had a demonstrative delivery, and he was able to repeat it. He had a big body, but he was more athletic than you’d think.

“Those were the kinds of things that jumped out at me about Josh as a player. He just had an old school vibe where he was going to be better than you, and he was going to let you know about it. He was going to knock you down with a pitch, and then come back with a painted slider if need be.

“There was an artistry to everything he did out there.”

After watching MacDonald pitch a few times, Penders and Connecticut decided to offer him a scholarship. The only problem? Penders offered Josh during a visit, and his mother, Regina, was not present at the meeting. In hindsight, that was a bad decision despite MacDonald still ending up a Husky.

“I’ll never forget that phone call from his mom,” Penders said. “I had just offered her kid a scholarship, and she called and let me have it because she wasn’t around when I offered him. It was a lesson learned, but it also was a perfect snapshot of why Josh is the way he is today — and successful at it.”

MacDonald ended up being a 47th round pick in the MLB draft the summer of 2001, but obviously chose to attend college. During his time as a player at UConn, he pitched in 62 games and earned the first win of the Jim Penders era. Imagine that.

He finished his Connecticut playing career with a 10-8 record and a 4.85 ERA. And during that time, he illustrated an ability to be an excellent coach someday.

“He was the type of guy who can do it all — he could be a starter, reliever, long guy, spot starter, you name it — he did it all,” Penders said. “It didn’t take long to generate an impression about Josh as a player. He’s not a shrinking violet for sure. He demands your attention. He’s so outgoing, so dynamic and he’s not quiet. He’s loud in everything he does.

“From the day forward that he played for me, I always saw that competitiveness out of him. He puts himself out there and he’s ultra-confident in everything he does. I might be overstating this a bit, but he’s kind of one of those guys who could be recruiting on the phone, running a camp, and cooking a pot roast — all at the same time. It’s unique.”

There are many aspects of Josh MacDonald that make him elite at his craft as a college baseball coach.

One those aspects is loyalty, much like head man Jim Penders.

Penders has had plenty of opportunities over the years to move on from Connecticut. He has taken the program to new heights, and he could have easily moved on to a place with an abundant amount of resources and an easier path to Omaha. But easier isn’t really in Penders’ (or MacDonald’s) DNA. They are UConn guys, and they view getting this program to Omaha as their mission, not just a steppingstone to another job.

“Make no mistake, he could be making more money somewhere else, and probably have an easier path somewhere else, but that’s not Josh. He knows it’s going to be so much more special when we get to Omaha with UConn. This is a special place.”

MacDonald has done an outstanding job in his 11 seasons with the program. Only once has the program finished a season with an ERA north of five, and MacDonald’s stuff reached a high-water mark this past season when the unit ranked sixth nationally with a 3.78 ERA.

In addition to that, the staff had a Third Team All-American pitcher in righthanded hurler Austin Peterson, who tallied a 3.83 ERA in 110.1 innings of work, along with 147 strikeouts and 25 walks.

Overall, MacDonald has developed seven All-American arms in his 11 seasons, while also having an All-American hurler on his staff in six of the last seven full seasons.

“Josh is good at his job, and the beauty of it is that we have totally different temperaments. It’s unique, and there’s definitely a balance there. Josh will take me where I need to go. He’s a great thermostat for me, and he lets me know when I need to take the volume up a notch.

“We have a great relationship. We have pretty informal meetings as coaches. Sometimes our best meetings are pretty spontaneous. Everything with Josh and our staff happens pretty organically,” he added. “But one thing I’ve always said is that if I sucked it up as a coach, please let me know.

“Let’s just say Josh has no problem telling me that. I’ve always appreciated that candor and bluntness, and it’s a big reason why he is who he is today as a coach. I think it’s incredible he’s getting this kind of recognition.”