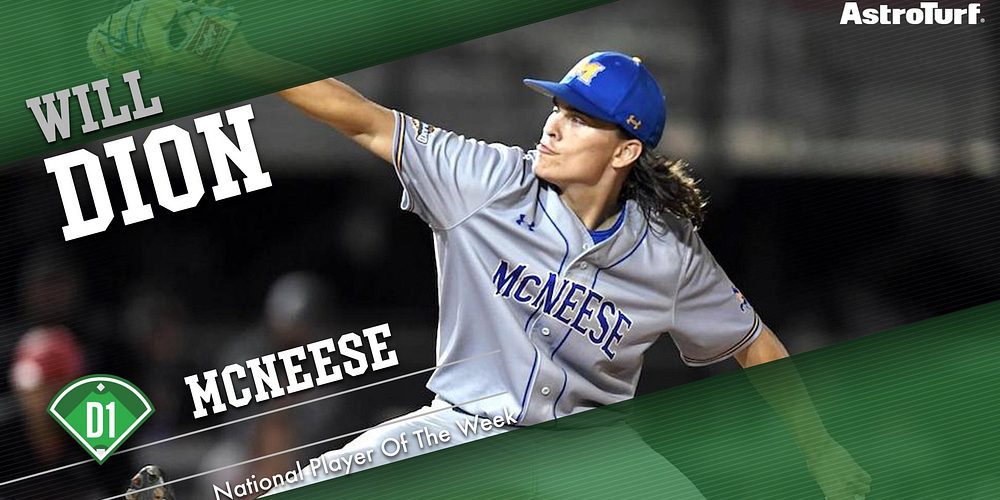 McNeese lefthanded pitcher Will Dion had a start for the ages last week, and for that, he’s our D1Baseball/AstroTurf National Player of the Week.

Dion, one of the top returning starting pitchers in the Southland Conference this spring, had what is best described as an incredible performance in a dominant win over Prairie View A&M last Friday.

The talented lefty tied a school record for strikeouts with 19 against the Panthers. He also retired the first 13 batters he faced — striking out eight of them, while facing just three batters over the minimum. Furthermore, Dion walked just one and allowed three hits in the complete game performance. Of his 103 pitches, 87 were strikes.

Dion’s start against the Panthers was special for another reason. After dealing with the aftermath of a strong hurricane in the fall, much of McNeese’s ballpark had to undergo some cosmetic surgery between the fall and spring. And his start kicked off a new era at the ballpark, while also giving the City of Lake Charles something to cheer about on the baseball diamond for the first time in a long time.

“I couldn’t imagine starting another pitcher in our first game back at home,” McNeese head coach Justin Hill said. “Will had a special night, Brett Whelton was fantastic behind the plate and his teammates made some incredible plays on defense. I was happy for him that he was able to finish what he started.”

Through two starts this season, the other coming against Alabama on Opening Weekend, Dion has now struck out 21, walked two and teams are hitting him at a .204 clip.

〈
Previous Article On The Mark: Reality Sets In, RPI Madness On The Horizon
Next Article Golden Spikes Spotlight On Sal Frelick, Plus BC Takeaways
〉

FILED UNDER McNeese State, Will Dion