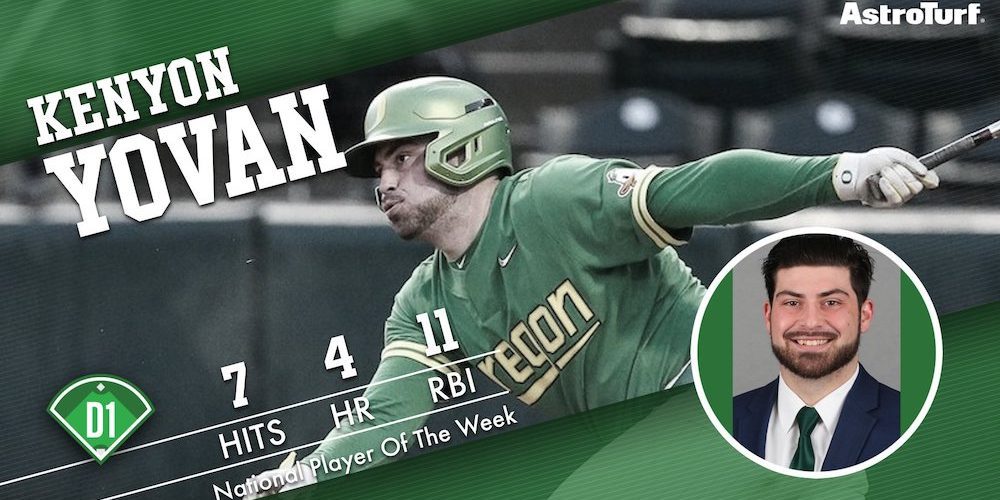 Kenyon Yovan had a weekend to remember, and for that and more, he’s the D1Baseball/AstroTurf National Player of the Week.

Yovan and the Ducks had a huge series on the road against previously ranked No. 7 UC Santa Barbara last weekend. While the Ducks as a whole shocked many by sweeping the Gauchos, it wasn’t a surprise that Yovan had a strong weekend at the plate.

The 6-foot-2, 221-pounder, was off to a terrific start in the 2020 season before it came to a grinding halt. He was hitting .429 with four home runs to lead the Ducks last spring.

He has continued where he left off this spring, and he was phenomenal against the Gauchos. He finished the four-game series 5-for-17 with four home runs, six runs scored and 11 RBIs. He also walked six times in the series — four of them intentional.

Once known as a premier pitcher, Yovan has reinvented himself as one of the nation’s most feared power hitters.

“That’s two years in a row that he has gotten off to a great start offensively,” Oregon coach Mark Wasikowski said. “You know, he’s a competitive kid, and he brings so much to our team. To insert a guy like that into the lineup — a guy who can hit four home runs and knocked in 11 runs — that just makes the lineup so much better, and it stretches the lineup a bit, too.

“That’s putting things in front of opposing pitchers that causes tough scenarios,” he added. “It just makes the whole team better when you can put someone that physical in the lineup. It also makes the guys throughout the lineup more confident when they see a guy producing like that. It creates less stress on other hitters, and suddenly, everyone is seeing better pitches.”