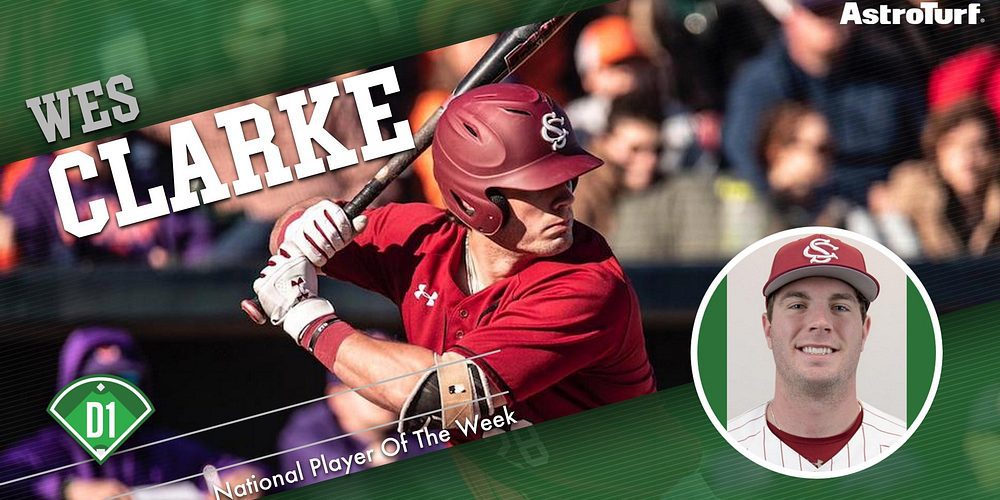 Some players had terrific Opening Weekends in college baseball.

The hard-hitting Gamecocks junior slugger had one of the more memorable Opening Weekends in recent memory in a three-game sweep of Dayton last weekend.

The 6-foot-2, 235-pounder, went a whopping 7-for-10 (.700) with two doubles, three home runs and nine RBIs in three games. He also walked five times and finished the weekend with a ridiculous .800 on-base percentage. His craziness continued only a couple of days later with a three home run performance in a midweek win over Winthrop.

For that and more, Clarke is this week’s D1Baseball/AstroTurf National Player of the Week.

“He has elite strength. He has a very short, flat swing, so he gives you a chance to change the game every time he walks to the plate. And for a big, strong guy, his strikeout numbers are in a good place,” Kingston said of Clarke. “On any given day you may see him at first, DH or catch. He’s solid back there, he’ll never win a Gold Glove but solid if you need to catch him.” — South Carolina coach Mark Kingston