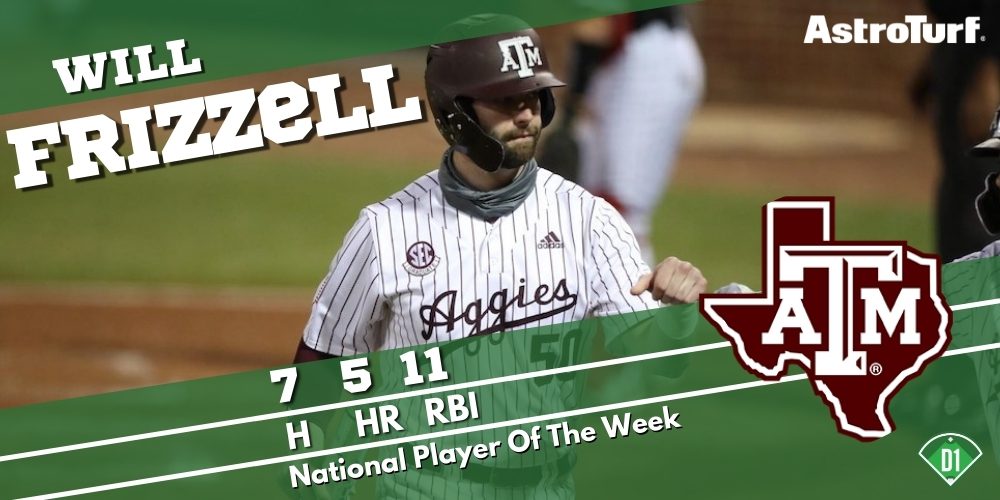 Texas A&M junior first baseman Will Frizzell had a good reason to put his baseball career on the shelf, and focus solely on his academic career, but he didn’t. He persisted.

Frizzell, a 6-foot-3, 235-pound, veteran infielder, is having an incredible offensive campaign to remember in the Southeastern Conference. And his performance this past weekend against Ole Miss was unreal, earning him the label as this week’s D1Baseball/AstroTurf National Player of the Week.

To say Frizzell was a one-man wrecking crew against the Rebels might be putting it mildly. He hit a walk-off home run in the series opener to beat the Rebels, and his most compelling performance came in the series finale, where he hit a two-run home run in the first inning for the Aggies before winning the game in the seventh inning with a grand slam on an 0-2 fastball up in the zone from righthander Taylor Broadway.

A week to remember, indeed.

Frizzell is ending his A&M career hitting at a torrid pace, and healthy, but he didn’t begin his collegiate career with either luxury.

The hard-hitting first baseman dealt with a variety of knee issues throughout his high school career, and they didn’t improve during his freshman season with the Aggies. If anything the issues got worse, even though Frizzell still managed to hit . 295 with 11 doubles, six home runs and 35 RBIs.

His knee issues showed up in a big way during his sophomore campaign, where he hit .215 with two home runs and 18 RBIs, while also having 31 strikeouts as opposed to just 18 walks. Not only was Frizzell struggling with his knee, but he had a tendency to swing through secondary offerings.

It was at that point in his career where Childress thought Frizzell had a decision to make. He could go see a few knee specialists, get the best surgery possible, and have around a 50 percent chance to continue playing baseball, or he could have surgery, quit baseball and focus solely on his academic career.

Frizzell chose to have surgery, and take his chances with baseball.

“He had chronic knee issues throughout high school, and he couldn’t really get a swing off at one point, and he couldn’t play defense. The surgery he had at the end of his freshman year didn’t help at all,” Childress said. “It got to the point where he met with several specialists and the surgery that was recommended was pretty much a quality of life thing — he had maybe less than a 50 percent chance to return to baseball.

“They actually went as far as having to put a bone plug in his knee,” Childress added. “He wanted to have the surgery and then see what would happen. Not only did he make it back, continue to be able to play defense and stay healthy, he’s now having this type of season week in and out.

Beyond staying healthy, Frizzell looks better than he ever has and improved his craft a great deal. Physically, Frizzell still has some brute strength and size, but it’s much more of a tall, muscular frame than it was in the past. Furthermore, he’s showing a mature offensive approach from the left side with the ability to hit the ball in all quadrants, and hit fastballs and other secondary pitches.

“Really over the COVID break, he went home and transformed his body,” Childress said. “He got into great shape and he’s just a super, super mature kid. And from an offensive standpoint these days, he’s a hitter first and a power guy second. He commands the zone now and is going to make you throw the ball over the plate.”

Sure, Frizzell has a history of health issues as it pertains to his knee. But he’s a seasoned SEC bat who hits for power, and has done so in a lineup that doesn’t particularly give him a lot of assistance.

At least some scouts have taken notice.

“He can absolutely be a solid senior draft for someone,” an American League crosschecker said. “His injury history complicates it some and there are going to be teams who think he’s a straight DH, but the lefthanded power is very attractive and he’s having a great year in a strong league.

“For me, he’s ideally just after the 10th round,” he added. “But if someone needs to save money inside the Top 10, I could easily see that occurring.”

Frizzell has had a lengthy career at Texas A&M, filled with a lot of downs, and now, plenty of ups. and he hopes to help the Aggies finish the regular season on a high note.

His performance last week was nothing short of Herculean.

FILED UNDER Texas A&M, Will Frizzell