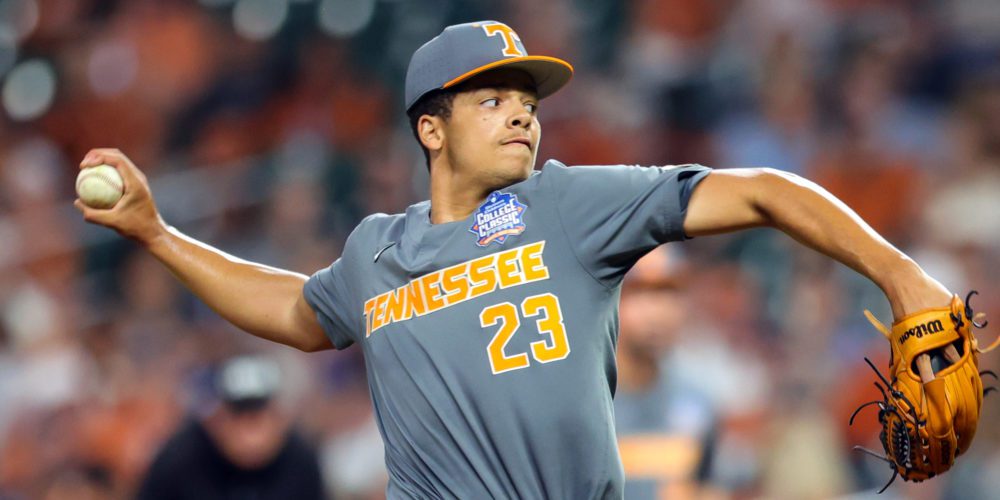 It’s not easy to succeed at any position as a freshman in the Southeastern Conference. But as the Friday night starter in year one for Tennessee? Not only are the stakes constantly high, but being in that role can be the ultimate pressure cooker.

You know who didn’t flinch in that role? Tennessee righthanded pitcher Chase Burns, who looked great in the fall, made his grand entrance in college baseball at the Shriners College Classic early in the season, and who put together an electrifying rest of the spring as the Volunteers were college baseball’s best team for much of the season.

For that and more, Burns is the 2022 D1Baseball.com Freshman of the Year.

To say Burns arrived in Knoxville with high expectations might be a slight understatement. Burns, the top prospect in the State of Tennessee, had an opportunity to be a high-round draft pick and to expedite his professional career. But the righty wanted to plot a different path. He wanted to head to Tennessee and help the program take yet another big step forward.

Naturally, a prospect of his caliber showing up on campus is a big deal. If he succeeds, it’s a perfect pitch for college baseball coaches all over the country. If he fails, some will say, ‘see, you should’ve signed’.

Burns didn’t let any outside noise bother him. He proved to be mature beyond his years.

He first caught the attention of our David Seifert in a big way during a look in the fall. In that outing, Burns was 94-98 mph with his fastball and showed feel for a power curveball at 82-83 mph, along with a filthy 89-90 mph cutter. Some wondered if Burns could command that type of heat. The answer? He could.

Burns jumped on the scene in a big way Opening Weekend this spring. He started against Georgia Southern on Opening Day, and didn’t disappoint, striking out five, walking one and allowing two hits in five shutout innings.

“He’s certainly not like most freshmen on the field,” Tennessee coach Tony Vitello said after Burns’ first start earlier this season. “Like most great players I’ve coached, they’re always always two different people in and out of uniform. When he’s on the field, he’s very serious about winning. When he’s pitching, he wants to be great. He wants to be really great.

“He obviously has advanced stuff, but there are a lot of guys around the country who don’t have advanced intangibles or character to go with that advanced staff. He has both of those things, and it’s pretty fun to watch.”

The start that grabbed my attention the most was at the Shriners College Classic in a marquee Friday night game against Texas. On the big stage and going against veteran Texas lefthanded pitcher Pete Hansen, Burns was poised and marvelous in his start. Sure, the Volunteers lost the game 7-2, but it wasn’t because of Burns. He struck out the side three times in the game, and struck out seven-straight Texas hitters at one point.

In that game against the Longhorns, Burns struck out 10, walked one and allowed just one run on two hits in five innings of work. His 89-90 mph cutter was ridiculous that night.

The righthander’s success continued the rest of the spring, as he was joined in the weekend rotation by another stellar freshman righty, Drew Beam. Those two, combined with SEC Pitcher of the Year Chase Dollander, combined to put together the nation’s premier weekend rotation with healthy competition amongst the trio.

Burns spent much of the season sitting 94-98 mph with his fastball, but hit another gear at one point in the postseason by getting up to 100 mph with the offering.

The Tennessee superstar earning Freshman of the Year honors by D1Baseball is just the start of a career that will be littered with various awards. Burns is already a special pitcher. But as with any competitor, he still feels like there’s room to grow.

Congratulations to our Freshman of the Year — Tennessee’s Chase Burns.