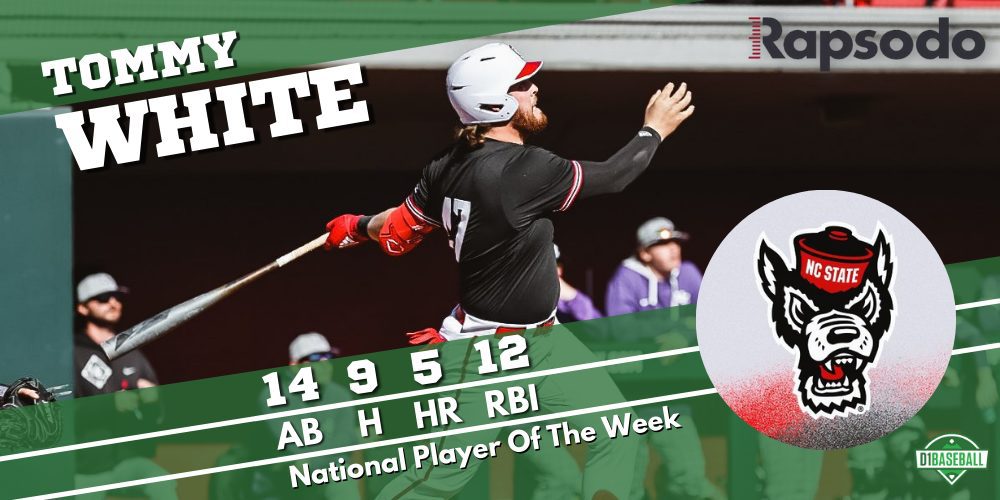 There’s a good weekend, and then there’s the weekend that NC State freshman slugger Tommy White put together in a series sweep over Evansville.

White, who was ranked by D1Baseball as one of the top Impact Freshmen in the Atlantic Coast Conference, dazzled observers in his first weekend in a Wolfpack uniform, hitting .643 (14 at bats) in three games, along with five home runs, 12 RBIs, a .688 OBP and a 1.714 slugging percentage. In all, he finished the weekend with a ridiculous 2.402 OPS.

For that and more, White is the first D1Baseball/Rapsodo National Player of the Week for the 2022 season.

“Tommy is just one of those throwback baseball players,” NC State coach Elliott Avent said. “He’s blessed with good instincts, good feel and an old school love for the game. His raw power is impressive, but he also possesses a good eye at the plate, and more importantly, is just a terrific overall hitter.”

To give you an idea of how much of an impact White made over the weekend, how about this from the hard-hitting 6-foot, 242-pounder? In his first game with the Pack, he slugged three home runs. Then, he went 2-for-4 with another home run in the second game before capping it all off with a home run in the series finale, while also going 2-for-4 with two RBIs.

It’s impossible to anoint someone an instant legend based off one weekend, but White looks like a force to be reckoned with sooner than almost anyone expected.

This was the first, but probably won’t be the last time he earns national honors.