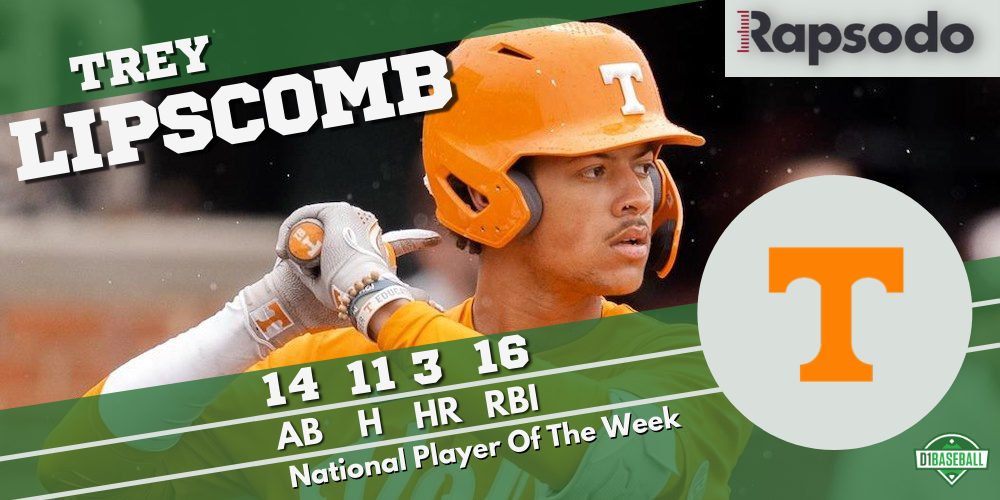 Tennessee has been on the warpath from an offensive standpoint the first two weeks of the season, and Trey Lipscomb is an integral piece to that onslaught.

Lipscomb put together yet another outstanding week, and for that, is this week’s D1Baseball/Rapsodo National Player of the Week.

Lipscomb, a 6-foot-1, 200-pounder, senior third baseman, had an out of this world type of week against UNC Asheville (midweek) and Iona over the weekend. He hit for the cycle against the Gaels and went 5-for-5 in a game he finished with a whopping nine RBIs. Overall, he finished the week 11-for-14 (.786) with three doubles, two triples and 16 RBIs – all this over the course of four games. By hitting for the cycle against the Gaels, Lipscomb became just the fourth Volunteers slugger in school history to accomplish the feat.

Lipscomb has taken a huge step forward this spring. Last season, he hit a hair over .300, but also had a limited number of at bats for a team that ended the season at the College World Series. This season? He has stepped up in a big way, hitting .577 with three doubles, two triples, four home runs and 20 RBIs. He also has a .586 OBP, a 1.308 SLG% and a ridiculous 1.894 OPS.

Congrats to Lipscomb on one heck of a week, and a well-deserved honor.