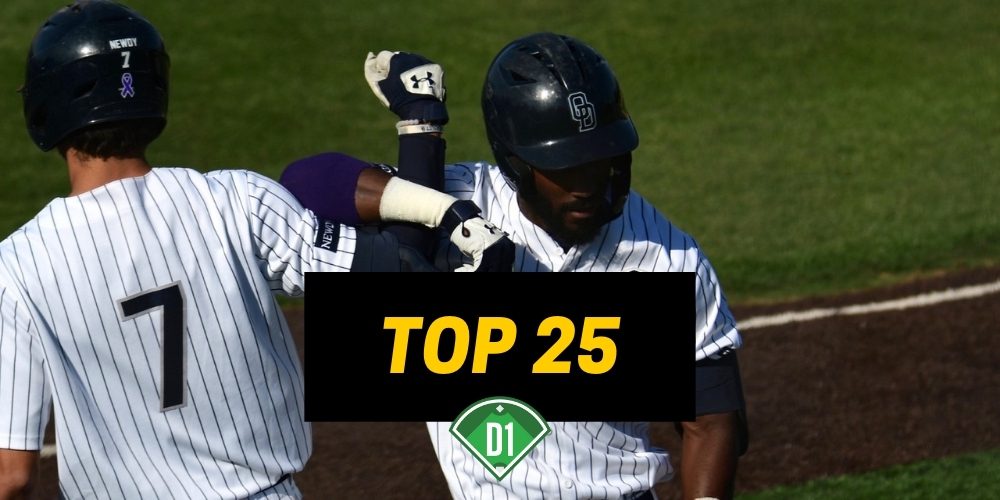 Arkansas completed an undefeated run to the SEC tournament title, keeping the Hogs atop the D1Baseball Top 25 for the eighth straight week. Arkansas has won all 15 of its weekends this year, counting the conference tournament, and heads into the NCAA tournament as the SEC regular-season and tourney champion, and the No. 1 national seed.

SEC East champion Tennessee climbed two spots to No. 2 after a run to the conference title game, moving Texas and Vanderbilt down one spot apiece to 3 and 4, respectively. Pac-12 champion Arizona and ACC regular-season champ Notre Dame moved up one spot apiece to Nos. 5 and 6. Stanford moved up two spots to No. 7 after taking a series from Oregon State, giving the Cardinal series wins against all five of the other regional teams from the Pac this year.

TCU made the one of the week’s biggest moves, vaulting seven spots to No. 8 after winning the Big 12 tournament championship. The Frogs had tied for the best record in the league in the regular season. Texas Tech fell four spots to No. 9 following a 1-2 showing in Oklahoma City. Oregon, the Pac-12 runner-up, held steady at No. 10.

Old Dominion made the biggest jump of the week, up nine spots from No. 24 to No. 15 after an unbeaten run to the C-USA title. The Monarchs earned the No. 11 national seed in the NCAA tournament.

〈
Previous Article Regionals Roundtable: Staff Quick Takes On The Field Of 64
Next Article The Baldcast: The Field of 64 Fast & Furious
〉