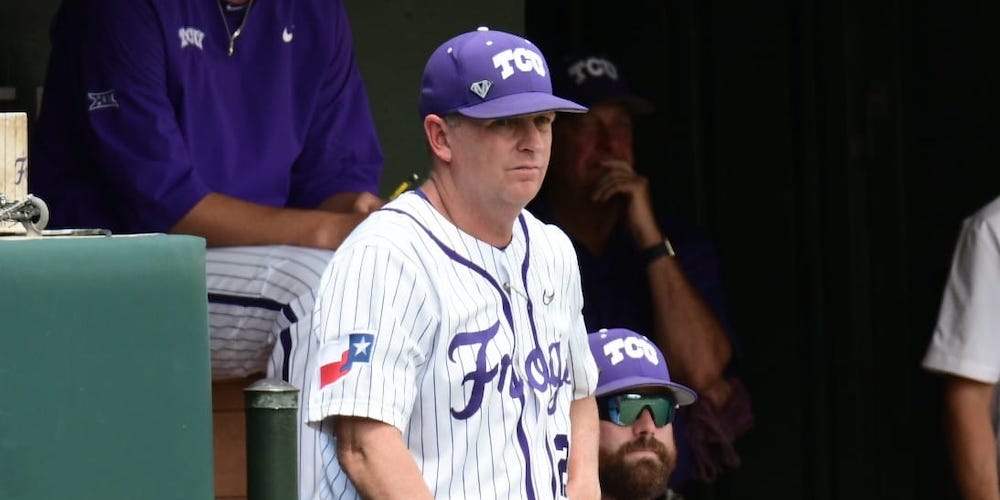 Texas A&M hired TCU’s Jim Schlossnagle as its next head coach, replacing long-time Aggies head coach Rob Childress, who did not have his contract renewed following the 2021 campaign.

Schlossnagle, a 50-year-old, Hagerstown, Md., native, recently guided TCU to the Big 12 regular season and tournament championships, and the Horned Frogs finished the season with a 41-19 overall record and a top eight national seed.

The long-time Horned Frogs head coach now takes on a new challenge in College Station, and he brings some impressive results along with him.

Schlossnagle has had quite the coaching career during previous stops at UNLV and TCU. Though he only spent two seasons at UNLV, the Rebels were trending the right direction and the Frogs took notice. TCU experienced a wealth of success in Schloss’s 18 seasons with the program.

Including the 2021 campaign, Schlossnagle guided the Frogs to three Big 12 regular season titles, 15 NCAA tournament appearances, seven Super Regional appearances, and most impressive of all, five College World Series appearances, including four-straight from 2014-17. To put that mark into perspective, the Aggies have reached the CWS only six times in program history.

Schlossnagle has a 55-36 career record in the NCAA tournament and finishes his Horned Frogs tenure with a 693-330 overall record. In addition to those marks, Schlossnagle earned National Coach of the Year honors in 2010, and again in 2016. This won’t be the first time Schlossnagle has had a chance to coach in the SEC. He was courted by Mississippi State in the summer of 2018, but decided to stay put in Fort Worth. Now, he gets to try his hand in arguably the nation’s premier conference.

As the long-time Frogs head coach takes off the purple and puts on the maroon, the expectation level in College Station will only increase.

The Aggies parted ways with Childress after the successful head coach made a whopping 13-straight NCAA tournament appearances before failing to reach the SEC tournament and NCAA tournament this season. Childress had success with the Aggies, but A&M athletic director Ross Bjork is aiming for more. The goal with bringing in Schlossnagle is to build on those results, get to Omaha and win games, and ultimately compete for the national title for the first time in program history.

Accomplishing that goal won’t be easy, but the Aggies have all the resources necessary, and a significant, additional renovation project is soon on the way at Blue Bell Park.

Schlossnagle will have other resources at his disposal. The Aggies are making a strong financial commitment to the program, and the long-time head coach is expected to have an excellent, highly acclaimed coaching staff with the expected assistant salary. Look for some high-profile names who are currently playing in the NCAA postseason to be part of his staff.

Texas A&M has always been relevant, to an extent, in college baseball on the national stage. But now, with the addition of Schlossnagle, it aims to take that next, biggest step.

It’s a new era in Aggieland.