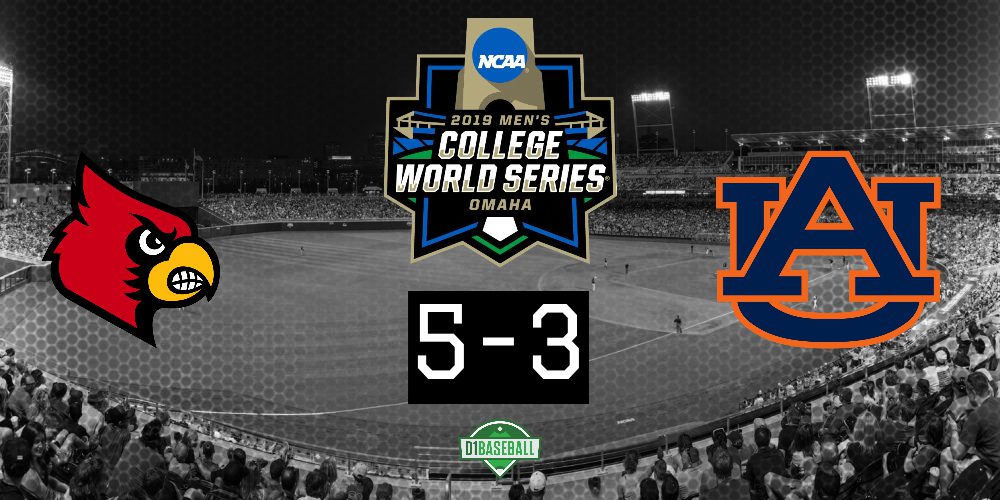 Ultimately, the difference in the game was defense. Louisville took control of the game with three runs in the third inning Tuesday — with the latter two runs scoring on two errors on one play, with two outs in the inning. And on the other side, the Cardinals played flawless and sometimes spectacular defense Tuesday afternoon and Wednesday, leading them to a 5-3 win in a CWS elimination game.

“I’m really proud of our guys because I thought our bullpen did what we needed them to do,” Louisville coach Dan McDonnell said. “Offensively we’ve put together some rallies. We’re close. We haven’t exploded yet; that’s the exciting thing. But we played defense, and when you pitch and you make some plays the way we did, some diving plays in the outfield, some great plays in the infield — we played well enough to win.”

Louisville right fielder Drew Campbell was the defensive hero during the Tuesday portion of the game, firing a strike to throw out Will Holland at the plate in the third inning, then making a nice diving catch with a runner on base to end the fourth. The Cardinals always emphasize outfield athleticism when constructing their rosters, and this team has two legitimate center fielders patrolling the outfield, with Lucas Dunn in center and Campbell in right. Campbell also continued his recent strong offensive play, walking and scoring a run in the fourth, then delivering a key insurance run with an RBI single in the seventh. 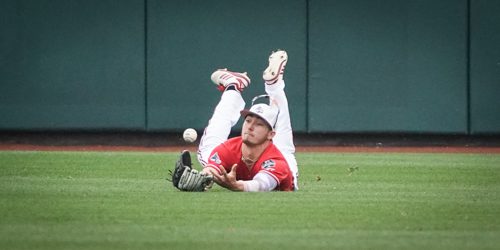 Campbell, second baseman Justin Lavey and catcher Henry Davis have done a great job turning over the lineup in the bottom third of the order this season, making this a deep lineup that is tough to pitch to, though the offense is still trying to find its stride here in Omaha. Lavey turned in an important quality at-bat in the fourth, drawing a bases-loaded walk to break a 1-1 tie.

But when Lavey came up in a big spot in the eighth, with men on first and second and nobody out, he popped up a bunt on a 3-1 pitch for a foul out. The way he responded to that mistake — starting a slick 4-6-3 double play in the eighth and then making a tough play on a slow roller by Ryan Bliss to start the ninth — stood out to McDonnell.

“I was most pleased that for a guy who doesn’t get the bunt down, to know how frustrated I am because I coach the bunting and we work on that a lot, man, he ran out there and made a huge double play that inning and then he made the huge slow roller play on their speedy second baseman in the ninth,” McDonnell said. “So Lavey stole Campbell’s shirt, kind of our MVP award, at the end of the game. I flipped it to Lavey because, looking back on the complete game, our defense was huge today.”

Louisville also got two strong scoreless innings out of reliever Adam Elliott when play restarted Wednesday, setting the tone for the day. Michael McAvene followed with two innings of one-run ball, and Michael Kirian allowed a solo homer and a two-out double in the ninth before halting Auburn’s comeback bid. Naturally, the Tigers continued to fight to the very end, as they have all season long. They had the bases loaded with two outs in the eighth, one swing away from tying the game or taking the lead, but McAvene escaped by striking out Judd Ward on 96 mph heat.

The ride is over for Auburn (Eric Sorenson)

Junior DH Conor Davis, a clear clubhouse leader for Auburn, doubled twice and hit a solo homer to center in the ninth. He and the other Tigers held their heads high after the game.

“I mean, it’s been our consistent mindset all year. We’ve had the battle-back mindset that we’re going to grind, we’re going to fight until the last out,” Davis said. “Last night kind of refreshed us and restarted us today, and we came back out, and I know that Coach [Butch Thompson] had already said that we couldn’t get anything going with our leadoff hitters and stuff like that, but even then you can see down in the ninth inning, we were battling with two outs, that’s a testimony to how our season was. We just battled even when it came down to the very last out.”

The Tigers have a strong foundation returning next year, and it’s easy to envision them getting back to Omaha and winning some games. That would feel like the natural next step in Auburn’s year-by-year progression under Thompson.

“I think it’s just a testimony to Coach Thompson, the type of man he is and the leadership role he’s brought to Auburn baseball,” Davis said. “Two years ago I ended my freshman year in a regional in Tallahassee, and last year a super regional in Florida. Just to get here and to make a mark like we have, it’s been 22 years and we’ve been working really hard. I just can’t wait to see where the program goes with Coach Thompson at its head. So it’s very exciting to see for the future.”