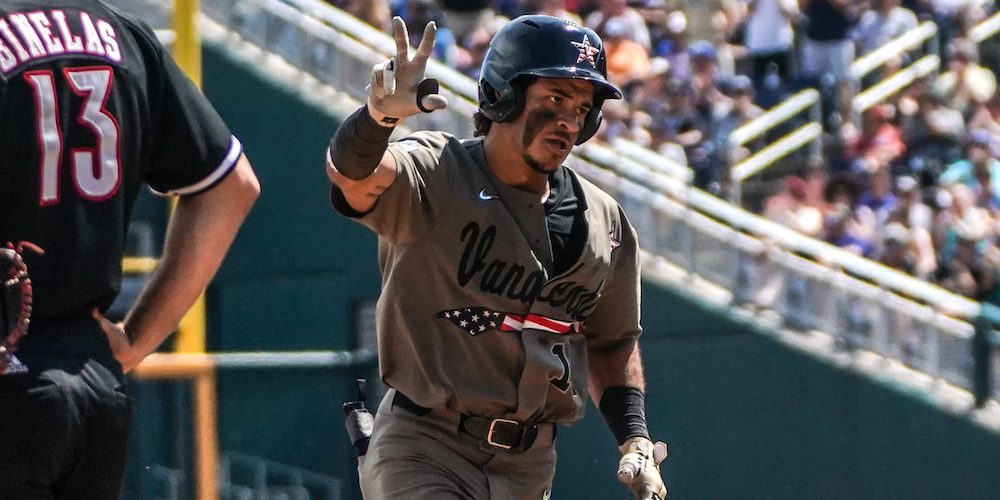 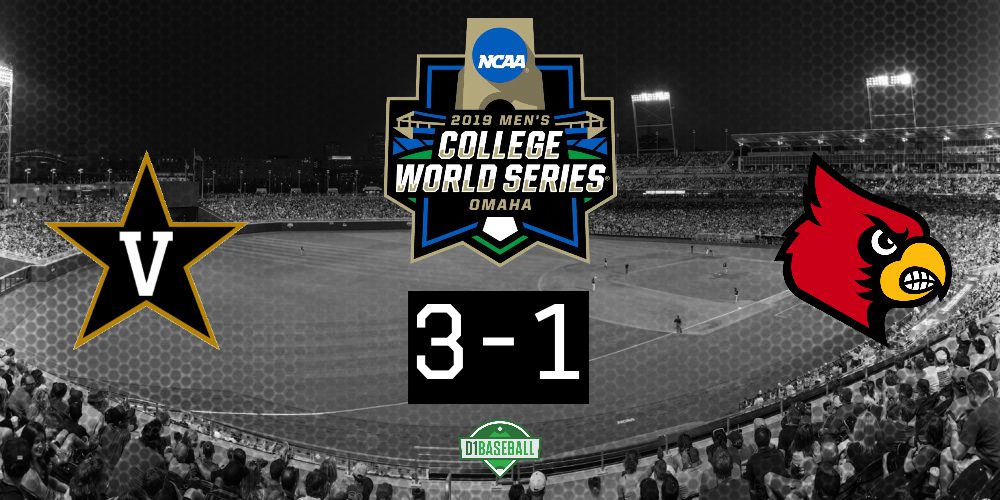 Vanderbilt coach Tim Corbin had an unusual answer when asked what has been the biggest key to Martin’s leap.

That answer was particularly relevant in light of Sunday’s events. Vanderbilt and Louisville were tied 1-1 in the seventh, when Martin strode to the plate with a runner on second base, and proceeded to crank his second home run of the day, a two-run shot that lifted the Commodores to a 3-1 win. The homer came on a Bryan Hoeing changeup in on Martin’s hands, and Martin showed off his quick hands by turning on the pitch and sending it over the left-center wall.

But he also showed off his brain, and his ability to make intelligent in-game adjustments.

“Coming into that, I actually talked to Harrison [Ray] and he was telling me that he was attacking in,” Martin said. “Thanks to him, I took his advice, took a couple steps off the plate, a couple inches away from the plate, so I gave myself a little bit more room. I saw the spin early off my front shoulder and just tried to put the best swing I could put on it.” 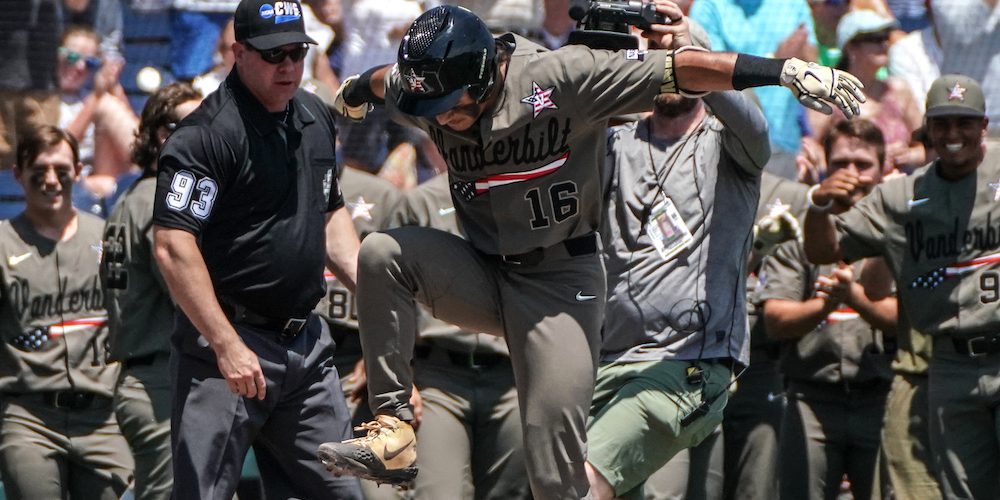 Back in the first inning, Martin had set the tone for the game by jumping on the first pitch of the game from Louisville ace Reid Detmers and driving it out to left field for a solo homer.

“Usually you’ll see pitchers try to just get that first strike away just so they can get into their rhythm,” Martin said. “So I’m always ready for that first pitch.”

A live-bodied athlete at 6-foot, 170 pounds, Martin isn’t exactly built like a typical power-hitting corner masher, but he how has four home runs in his last two games, dating back to the final game of the Nashville Super Regional. But his bat speed is special, and so his his innate knack for finding the barrel. That’s why Corbin said he always figured Martin’s power production would come, just as it has come in a huge way for 6-foot-3 junior slugger JJ Bleday, the national home run leader.

“It doesn’t really come as a surprise because I think he can get to the middle of the ball consistently, just like JJ,” Corbin said. “The question I get asked a lot is, ‘Are the numbers surprising to you for JJ?’ They’re not surprising because if he wasn’t taken out seven weeks last year, there would have been double-digit home runs with him, too. But JJ in time learned how to get to the ball and not have to recruit power, and because he didn’t recruit power, then power came to him. And I think Marty is learning that.

“I think there’s a time in a hitter’s life where you start to understand how to hit the ball, and the swing that he took today, I thought that was a very good pitch. What Marty did that he couldn’t do in February, March and April was slide his hands inside the ball in order to generate back spin, and that just takes time. He’s, what, 260, 270 at-bats into this? And that’s where kids learn, if they can just bottle up a lot of at-bats they understand how to increase power without manufacturing it.”

If Martin and Bleday developed power by bottling up at-bats, ace Drake Fellows developed his trademark competitiveness and poise by bottling up big inning after big inning over the last three years. Fellows has good stuff, though certainly not the best raw stuff on the Vanderbilt staff. What makes him so valuable is his veteran presence. He sets the tone atop the Vandy rotation, just like Detmers does for Louisville. 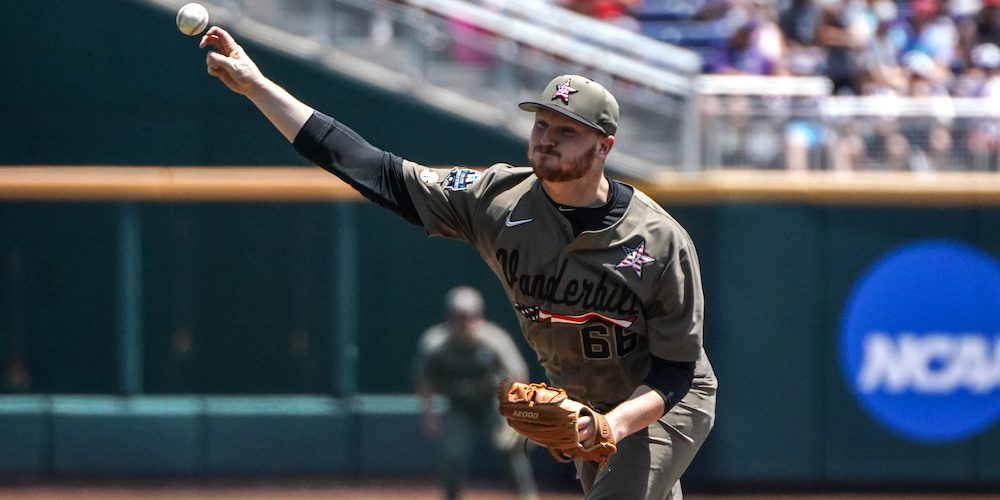 Both aces had to grind through some jams Sunday, but Fellows was more efficient and went deeper into the game, holding Louisville to one run over seven strong innings. He issued just one walk while scattering seven hits and striking out six, and his location was much better than it was over the last two weeks.

“I feel like the plan was just to go out there and attack the hitters and just getting all my pitches over for strikes, especially the fastball command wasn’t really there last week, and I think that was just the plan of attack, to just keep the location down and attacking the zone and not getting too wild,” Fellows said. “And then the offense gave me a little bit of boost, as well, with A-Mart’s two home runs which gave me a little bit more cushion, a little more comfortable to just go out there and attack the hitters.”

After taking his first loss of the season last week against Duke, when he allowed seven runs (five earned) in four innings, Fellows bounced back to pick up his nation-leading 13th win of the season Sunday in Omaha. He did exactly what Corbin and pitching coach Scott Brown expected him to do.

“We trust the kid, and I don’t think when you trust someone — just because they don’t have a game or potentially two games to their liking or to our liking doesn’t mean you dismiss the kid and the fibers of the kid,” Corbin said. “He’s a very competitive young man, and in a lot of ways I felt like if he had two tougher outings, he wasn’t going to have a third. I just felt like he would pitch well today, and Brownie did, too.”

Perhaps the biggest key to the game was Fellows coming out and establishing his rhythm right out of the gate. While Detmers labored over the first three innings but was able to wriggle out of trouble, Fellows pounded the zone and allowed just two baserunners (one via error) in the first three innings. That set him on a course to pound the zone with his fastball and slider, and allowed him to get deeper into the game.

“I think what was helpful to him was the fastball command and how he got to that quicker into this game,” Corbin said. “The first and second and third inning he had some quick innings, and I think that gave him a shot of adrenaline himself and some confidence. That always concerns me first game, pitchers being a little bit wild and so on. But I thought he did a nice job of getting to the glove and being the aggressor.”

It was a hard-fought grind of a win, but when the dust settled the result was familiar: a Fellows victory, and a Vanderbilt victory, for the 31st time in its last 33 games.