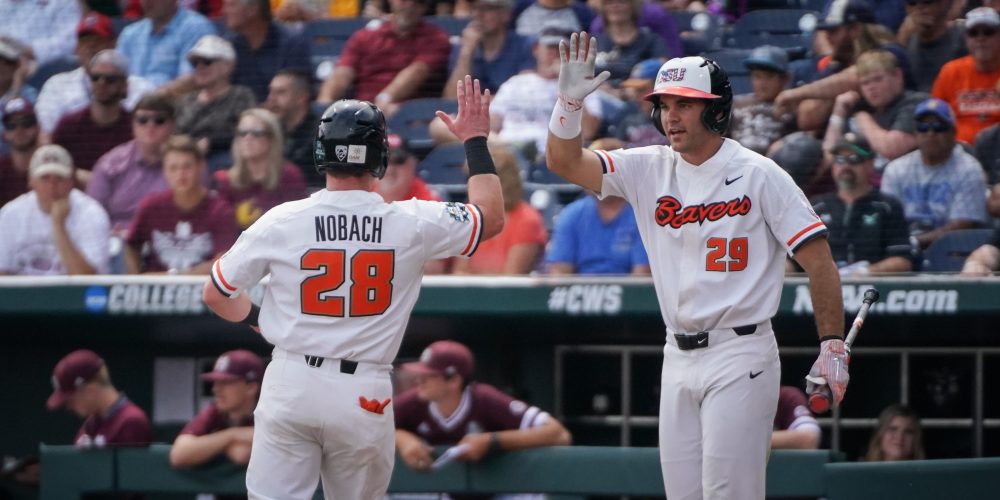 Kyle Nobach and Jack Anderson had good days at the plate. (Mandy Sorenson) 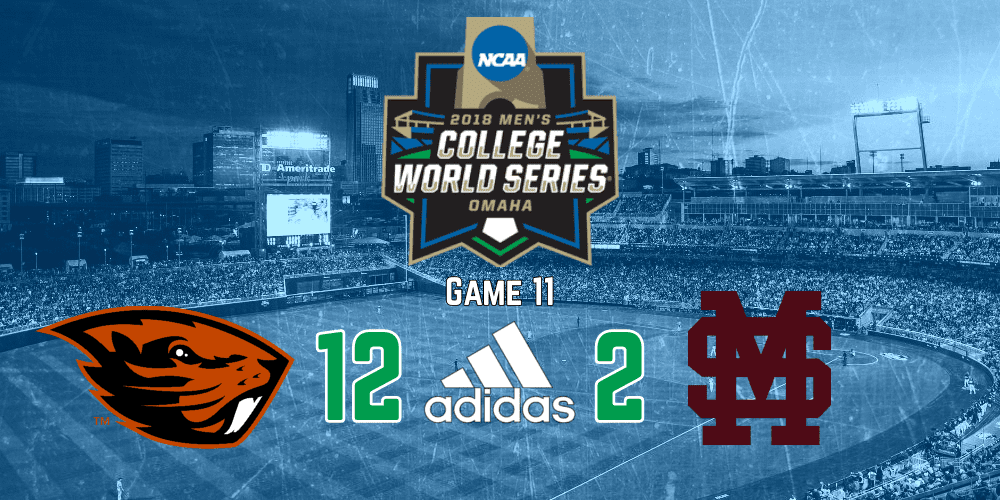 Well before the start of Friday’s 12-2 loss to Oregon State, the Bulldogs had a scary situation unfold as Saturday’s projected starting pitcher, lefthander Ethan Small, was hit by a line drive during batting practice. Small was down on the field for a few minutes before he arrived back on his feet and seemingly shook it off.

It was was a scary moment for the Bulldogs, and fortunately, head coach Gary Henderson said after the game he should be good to go in tomorrow’s contest. But the occurrence was the precursor to a bad afternoon for the Maroon and White, while for the Beavers, it was a euphoric afternoon with the offense putting together yet another impressive performance to force a second bracket championship game.

“I thought we really played well defensively in the infield, and thought we made some big plays. It is kind of odd we haven’t gotten a real quality start here yet. But Brandon Eisert was obviously lights out [out of the pen],” Oregon State coach Pat Casey said. “And these guys over here [motioning to Trevor Larnach and Kyle Nobach] really produced some offense for us and got us going, and feeling good.

“I thought we had a lot of momentum,” he continued. “I thought we were really sharp. And we’re just thankful we’ve got another day.”

It has been a real treat to watch this OSU offense at work over the past few games, and even the entire year. Last season, the Beavers had a productive offense, but it wasn’t this potent, and more often than not, OSU used its stellar pitching to get the job done. For instance, OSU went 2-2 in last year’s CWS and tallied an unimpressive .213 batting average in four games. The offensive unit also finished the season with an average shy of .300.

It has been a different story this go-round in Omaha, and it’s not too surprising considering OSU entered the CWS with a stellar .322 team batting average, and is now hitting .377 in this CWS. Insanity.

“Well, obviously when you’re swinging the bat well, you have a lot of confidence going up and down the lineup. I think Kyle said something that’s important: You kind of surrender averages and just go play the game. And I think it helps, I really do,” Casey said. “I think we’ve got a team approach to swinging, and I’m sure a lot of guys do that as well. But I think they have a lot of trust in one another. And obviously, we’ve been through spells during the year when we haven’t swung the bat that well. They’re swinging the bat well and certainly it’s something I’m excited about.” 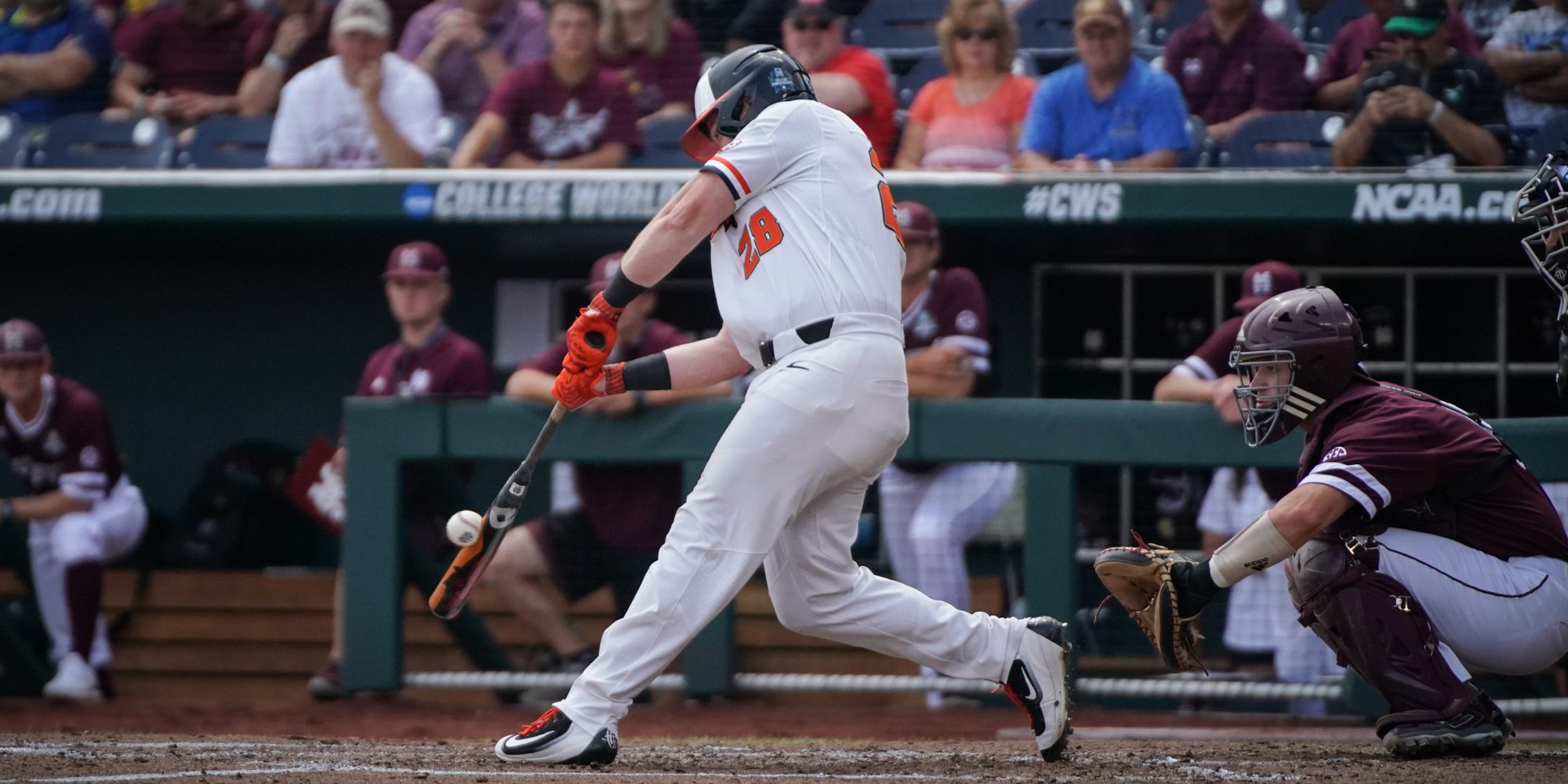 Kyle Nobach and the OSU offense had another afternoon to remember. (Mandy Sorenson)

In the CWS opener against North Carolina, the Beavers were unable to overcome a sluggish start from lefthander Luke Heimlich. They scored six runs in the loss. But everything has been different for the better since the middle innings of a 14-5 win over Washington. After romping the Huskies after a lengthy rain delay, OSU used a late surge against North Carolina’s bullpen in the Omaha mist to win 11-6.

That offensive onslaught carried over to Friday’s contest, as the Beavers brought across 12 runs on 15 hits. Sure, Mississippi State’s 11 free passes aided OSU to an extent, but Trevor Larnach and Nick Madrigal totaled six hits, while Kyle Nobach, who has become a hero here in Omaha, put together a two-hit performance. OSU is getting contributions up and down the lineup.

“Well, besides the fact they’ve got really good players, exceptional players through the first four, they do a really good job of making you pay for mistakes. Now, when you make good pitches, you can get them out. And that’s kind of a standard saying that every pitching coach has uttered to his staff,” Mississippi State head coach Gary Henderson said. “But the margin for error when you’re facing them right now is not very good. And on top of it, we put 11 guys on base.

“Really, that type of thing just turns your margin for error into just about nothing. You have to be really, really good. And we just weren’t sharp enough today to earn a victory,” he continued. “They hit some balls on the nose and they had their fair share of soft contact, too. You put all of that together and that’s the game you just watched.”

With today’s game included, Oregon State has now scored 43 runs in the College World Series, which is the most runs any team has scored through the first four games in the TD Ameritrade Park era of the CWS. Furthermore, the Beavers have outscored teams 37-13 in the three wins since the opening loss to North Carolina, while also scoring 11 or more runs three-straight games — the last time to do that? Cal State Fullerton back in 1995, who by the way did that on the way to a national title.

“I mean, I don’t think of any of us really pay attention to stats,” red-hot Kyle Nobach said. “We just go out there and we want to play for each other. And I think that raises your level of play, when your focus is not on yourself and it’s on the team. And I think everyone feels that way.

In what was a grueling 3 hour, 45 minute contest, the Beavers didn’t waste much time in asserting themselves against the Bulldogs.

For at least a half inning, things looked okay for the Bulldogs. Jake Mangum led off the game with a hit-by-pitch before he was brought home on a double by Hunter Stovall. That was pretty much the peak moment of the game for the Bulldogs.

Oregon State answered in the bottom of the first with a run of its own on an RBI single from Trevor Larnach before erupting for a five-run second inning that included four hits, a key double from Nobach and a two-run single from red-hot Adley Rutschman. The Beavs also were aided by sketchy pitching from the Bulldogs, as they walked three times, and were hit once.

OSU jumped out to a 6-1 lead and never looked back, getting the lead off hitter on base in all but two innings. 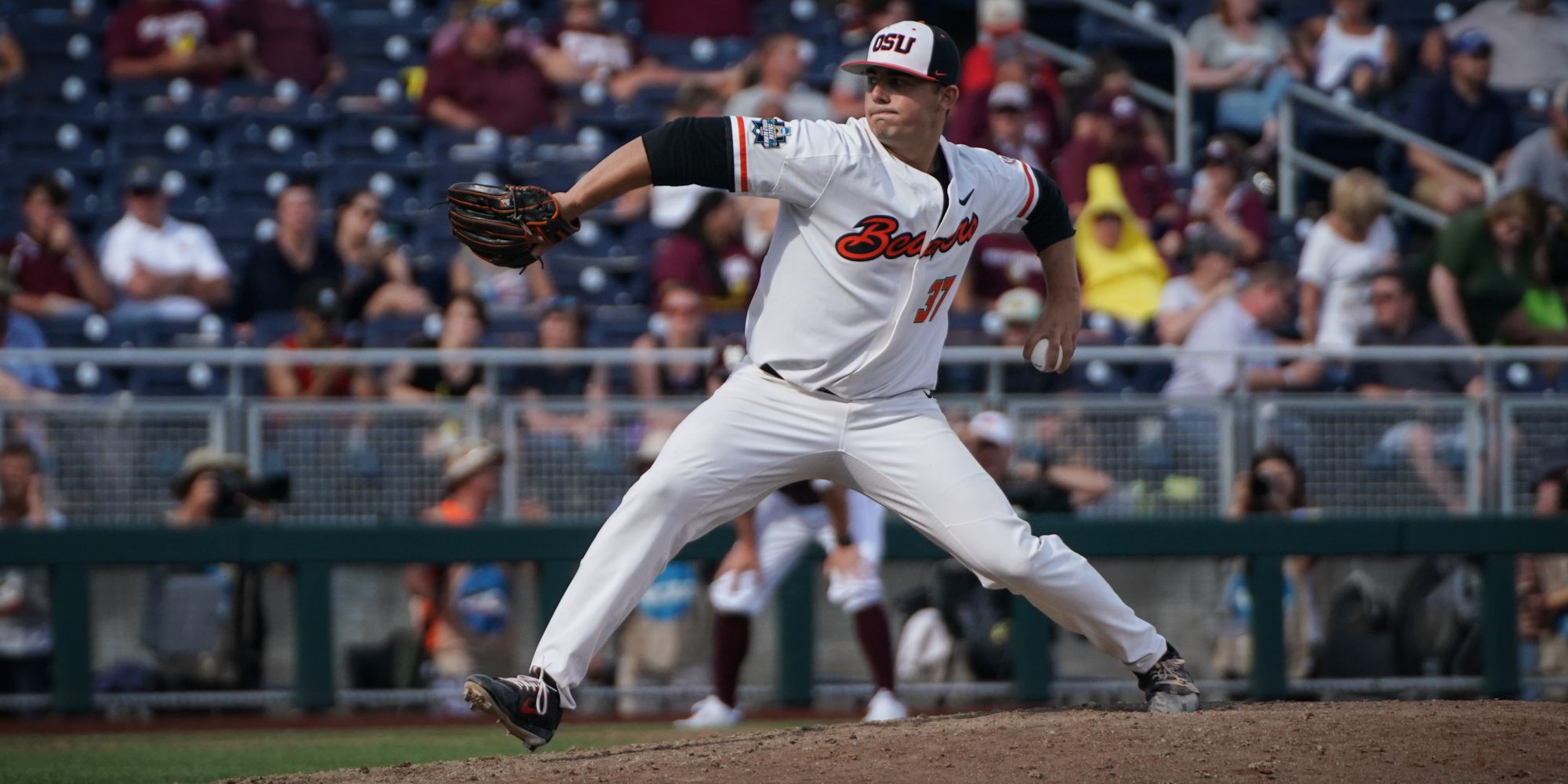 Brandon Eisert was stellar in relief for the Beavers. (Mandy Sorenson)

While yet another OSU starting pitcher scuffled, with righthander Bryce Fehmel allowing two runs on four hits in 3.2 innings, the Beavers bullpen rose to the occasion with lefthander Brandon Eisert throwing up a lot of zeroes. Eisert established himself well in the fourth inning as he entered the game with a runner in scoring position and Jordan Westburg at the plate. The lefty punched out Westburg on a 92 mph fastball to end the threat.

Eisert didn’t allow an MSU runner to reach second base the rest of the way, striking out three, walking just one and allowing a hit in 5.1 shutout innings.

“Well, you know, it was good. And you know, it’s like I said, and it’s no knock on the starting pitching, we just really haven’t gotten a good start. So, we’re kind of concerned about it — obviously, you’re pinned against a wall when you get in the loser’s bracket,” Casey said. “And never would I have dreamed that Eisy [Eisert] would have given us so much length. But I also wouldn’t have dreamed that Fehmel couldn’t get us through five.

But it’s kind of a scrap deal with us on the mound and some guys have come in and done really well,” he continued. “We’re up against some really good pitching right now, so the lead really helped, and really gave us some momentum.”

So, the stage is set for a winner-take-all bracket title game on Saturday. The Beavers are sizzling hot from an offensive standpoint, but are riding on thin ice with consistent bad starts. You just feel like OSU’s luck is going to run out at some point in that regard. As for MSU, the Bulldogs have been in this position before. They were on the ropes in regional play after losing the first game to Oklahoma. We all know how that ended up. They also traded punches with Vanderbilt before delivering a decisive blow to get to Omaha.

Now, with the season on the line, we’ll see if Mississippi State has one final chapter to add its soap opera, or if Oregon State finishes what it didn’t in Omaha last June.

One game now means everything.