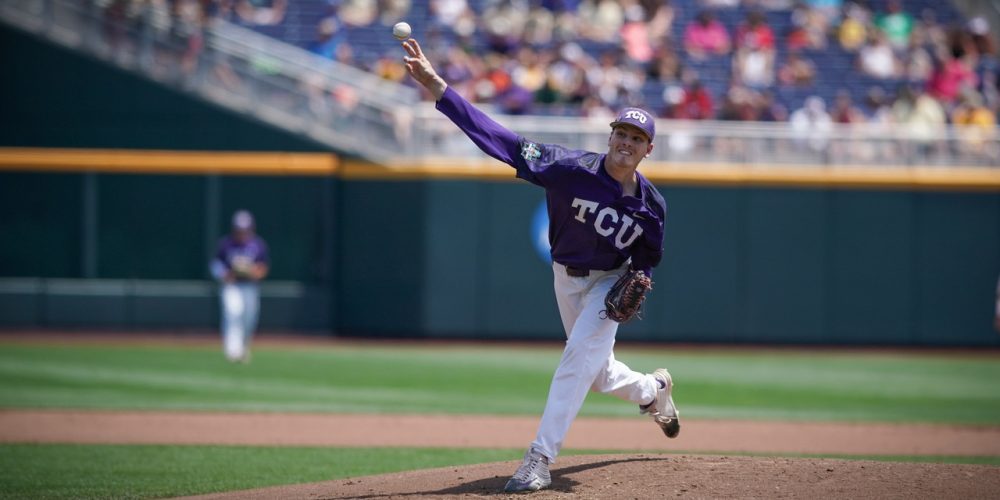 OMAHA — During the 2015 College World Series, Jim Schlossnagle called Preston Morrison “the best pitcher in the history of the school, bar none.” He has reiterated that sentiment repeatedly in the two years since.

Brian Howard isn’t going to knock Morrison off that perch — Morrison spent four years in the rotation and posted a 1.85 career ERA. But with every postseason masterpiece, Howard is adding to his legacy as one of the most important pitchers in program history.

“Big-Game Howie, as he’s affectionately known in Fort Worth, showed up today,” TCU coach Jim Schlossnagle said. “Just amazing through, especially, the great pitching history of our program in the last 14 years — we’ve had a lot of really good pitchers, big leaguers, that kind of thing — and for Brian to be the only back-to-back 10-game-or-more winner in our program is an awesome statement for him and (pitching coach Kirk) Saarloos and the program in general.”

A few weeks ago at the Big 12 tournament, Howard set a career high with 12 strikeouts in a complete-game gem against Kansas, and we wrote about his propensity to raise his game in the postseason, when the stakes are highest. Schlossnagle said after that Kansas game that Howard had been “just kind of going through the season” in 2016 before suddenly becoming a superstar in the postseason, winning his last five starts in dominating fashion. This spring, he carried a 4.80 ERA into the Big 12 tournament — and he’s been a beast ever since.

Howard tied that career high with 12 strikeouts over seven innings of one-run ball in Tuesday’s 4-1 win against Texas A&M, helping the Frogs eliminate the Aggies for the third season in a row. It was also the third year in a row that Howard has personally contributed to that final game against the Aggies — last year he held them to two hits and one unearned run over seven innings in the super regional clincher, and two years ago he delivered two scoreless innings of relief to help TCU win a 16-inning classic in the super regional finale. He’s now 6-0 all-time in the NCAA tournament.

“The story today was Brian Howard. He was fabulous on the mound, and we didn’t have a whole lot of opportunities to show,” Texas A&M coach Rob Childress said.

“You know, he’s really good. I mean, I think that kid is going to pitch a long time. I don’t know what his numbers are against Texas A&M, but I would expect they’re pretty good.” 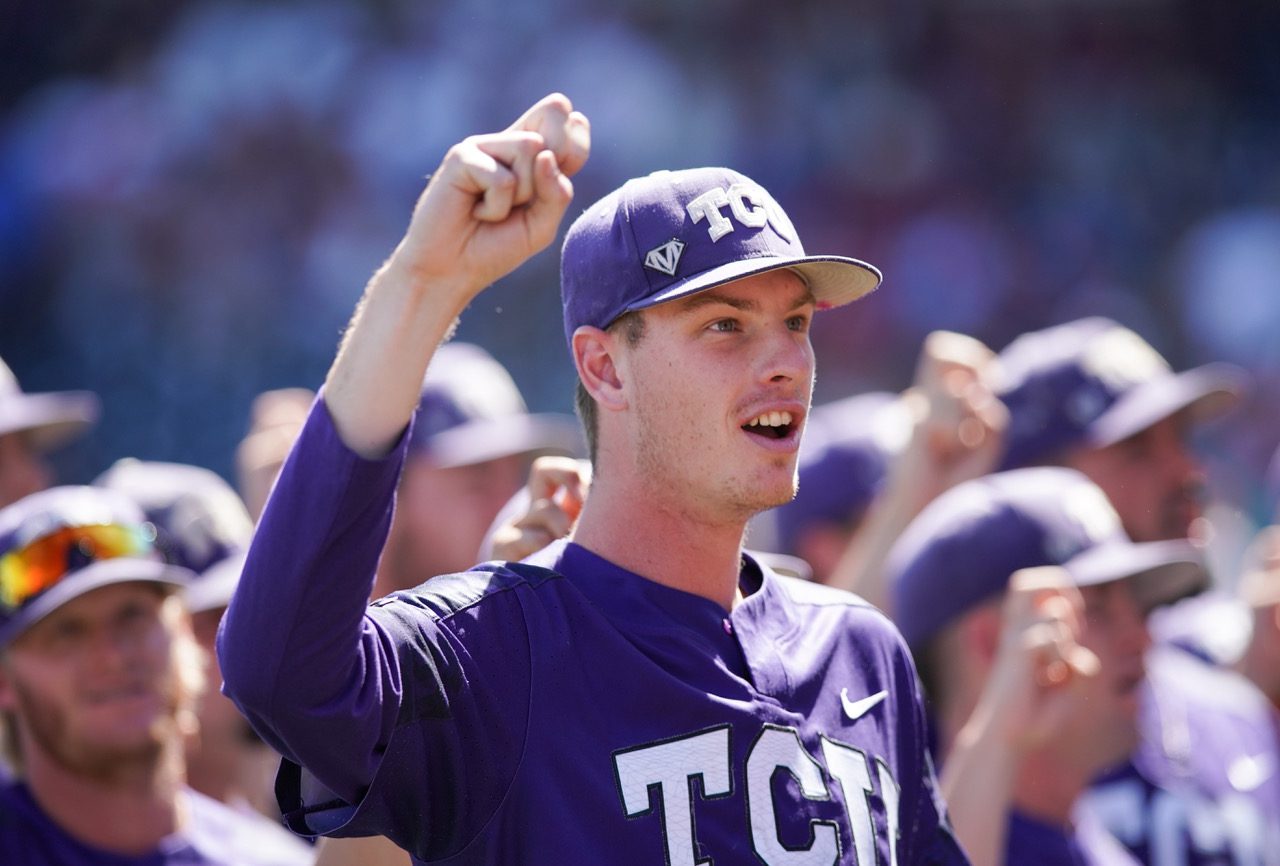 Howard allowed five hits and no walks on Tuesday, as he improved to 2-0, 0.56 with eight hits allowed and a 23-3 K-BB mark in 16 career innings against the Aggies. He struck out the side in each of the first two innings, stranding a runner at second base with a big strikeout in the first. A&M catcher Cole Bedford called him “an adrenaline guy” who is very tough to hit once he gets in a groove, and he sprinted off the mound with emotion after that first-inning strikeout. From that point on, he never left his groove — all he did was pummel the strike zone and rack up Ks. Despite his high strikeout total, Howard threw just 91 pitches over seven-plus, and 70 of them were strikes. That’s freakish efficiency.

“I think today was probably the best stuff I had all season. I’m pumped I didn’t walk anybody — I didn’t give up any free bases,” Howard said. “I felt like I was attacking the strike zone from the beginning, and I was able to carry that through. We talked pregame about how aggressive that lineup was, and they were aggressive today.”

Childress said the key against Howard was “just don’t miss a fastball” when you get one, because it’s not easy to hit his curveball and cutter. But Childress lamented that his team fouled off a lot of fastballs instead of putting them in play.

Howard said the key to his success down the stretch has been his ability to locate his 88-91 fastball at the bottom of the zone, which makes it very tough to hit because he works downhill from a 6-foot-9 frame. In the 12-strikeout game against Kansas, Howard said he had better feel for his changeup than he’d ever had before, but he used the pitch very seldom on Tuesday. Schlossnagle said he only tends to go to the change when he’s struggling with his curveball, but he commanded the 76-77 downer curve very well against the Aggies, and it was plenty effective against lefties. He also got a number of strikeouts with his cutter, which Schlossnagle said looked more slider-ish than usual, with a tick less velocity but more depth.

It has been fun to watch Howard develop from a projectable beanpole who lacked the endurance to start a few years ago into a workhorse who maintains his heater deep into games as a senior. He’s still tall and lean, but he’s also clearly stronger than he used to be, and his stuff is better.

One thing he’s always had is a magnetic personality and an incredibly high energy level. Somebody on Twitter liked Howard to a big, skinny rooster strutting around the mound after strikeouts Tuesday.

That reminded me of something former TCU recruiting coordinator Tony Vitello (now the new head coach at Tennessee) said of Howard back in the fall of 2013, when he was a freshman.

“He kind of carries himself with some swagger but doesn’t really have the body to back it up,” Vitello said then.

Now he’s got the body and the swagger, and that’s a big reason for his success. 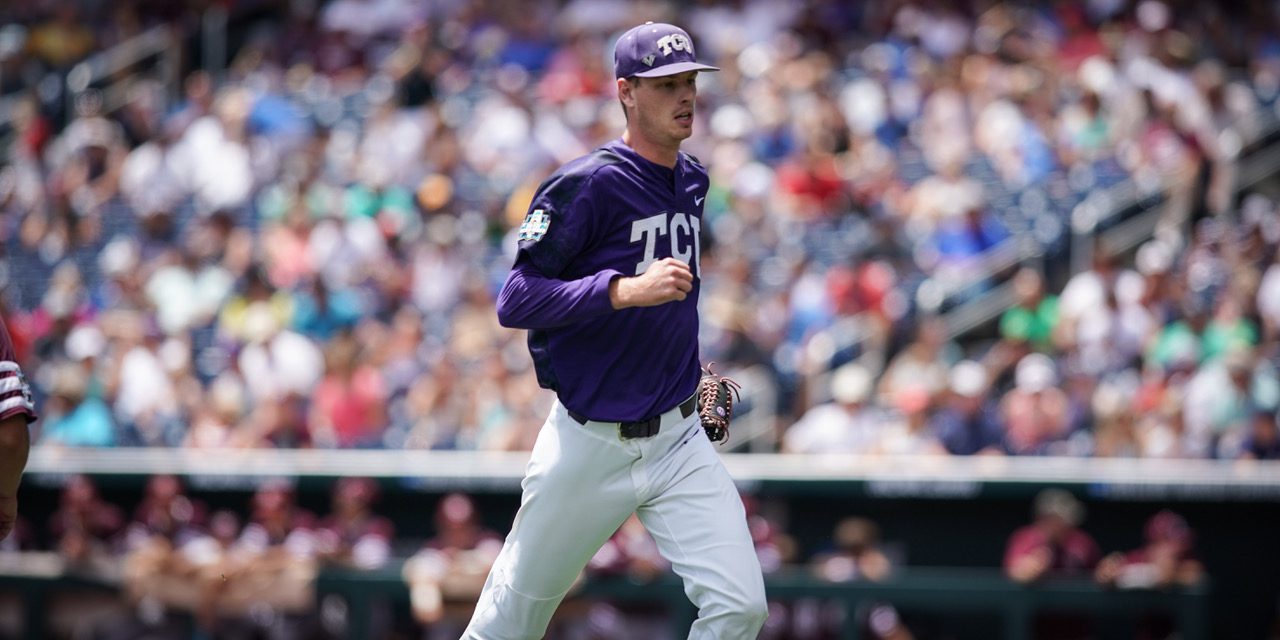 Like Jared Janczak, Howard bounds back to the dugout when he’s fired up — and he showed serious fire in the dugout when his teammates came through on Tuesday. After Sean Wymer stranded an inherited runner with two strikeouts and a groundout in the eighth inning, Howard could be seen fist-pumping and yelling as he jumped around in the dugout.

And when Ryan Merrill, an Omaha native, hit his first career CWS home run to put the Frogs up 2-0 in the third inning, Howard appreciated it more than anyone. Merrill is his roommate back in Fort Worth.

“I just normally sit down against the back wall and take everything in and try not to show any emotion or move or really cheer while we’re on offense while I’m pitching — but immediately when it was hit, I jumped up onto the top rail and started going nuts, because I mean, that was just a special moment for everyone, his parents, obviously,” Howard said. “It was just really neat to see that. He said he blacked out around first, which was probably true. But that was just incredible.”

For his part, Merrill was plenty pleased for his roommate, too.

“He’s a great guy, one of my best friends, and it’s awesome to see him do what he does,” Merrill said.

It’s pretty clear that Howard is, in fact, a great guy. I’ve enjoyed his postgame insights and witticisms quite a bit over the last few years — he showed off that quick wit again on Tuesday, when a reporter asked him whether it was true that he was dealing with with a blister on his thumb.

“It was accurate, and it affected me on every hit I gave up. But other than that, it was fine,” Howard deadpanned. The room erupted with laughter.

It was a good reminder of how much Big-Game Howie means to TCU. He’s a clubhouse glue guy who helps keep everybody loose — and when he’s on the mound in the postseason, the Horned Frogs know they can count on something special to happen.