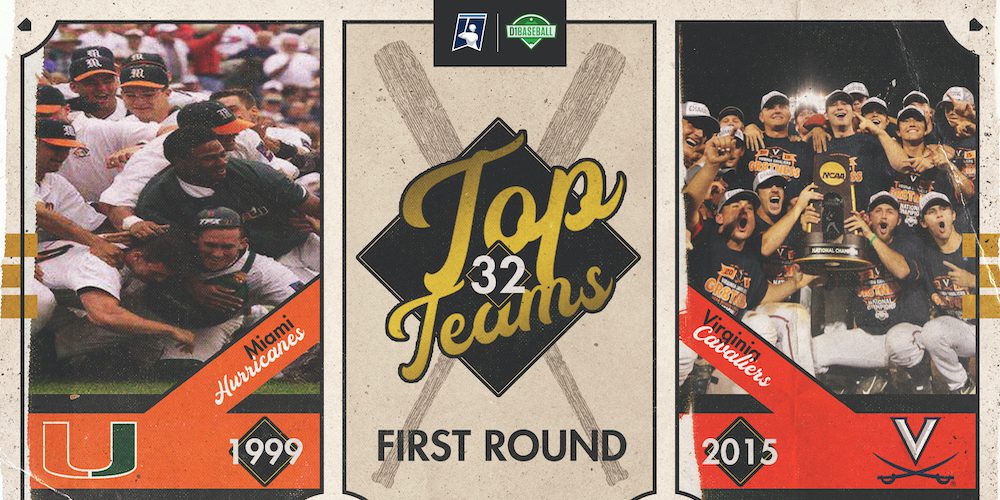 The Hurricanes were still an independent at this point, and put together an outstanding regular season, earning them the top overall national seed in the NCAA tournament. The ‘Canes didn’t disappoint once there, beating Bethune-Cookman in the first game before edging crosstown foe Florida International in the second game. UM defeated Florida Atlantic 3-2 to advance to the Super Regional round. There, the ‘Canes outscored Wake Forest 18-3 in two games to make yet another trip to the College World Series.

In Omaha, the Hurricanes led the field of eight offensively with a .312 average, while the pitching staff also performed at a high level, leading the field by almost two full points with a 2.25 ERA. Miami starting pitcher Alex Santos put on a show in Omaha that year, tallying a 1.54 ERA in two starts and 11.2 innings of work. He also struck out 10 and limited teams to a .182 average. Meanwhile, Michael Neu was outstanding out of the bullpen. He made four appearances and struck out 10 in 7.1 innings to headline the UM bullpen. Offensively, Bobby Hill had a strong showing in four games with a .571 average and .684 OBP, while Lale Esquivel and Manny Crespo each had .400 batting averages. Current UCF head coach Greg Lovelady, also a member of the 2001 national title team, had one hit in the CWS.

Just a year after falling just short of a national title against Vanderbilt, the much more unlikely team actually finished the job the next season. The Cavaliers put together an average regular season in 2015, making the NCAA tournament after going .500 in the Atlantic Coast Conference. Because of that, the Cavaliers had to do it the hard way — they had to begin the postseason on the road at the Lake Elsinore, Calif., regional. There, the Cavaliers defeated No. 2 seed USC before getting into the driver’s seat with a 3-1 win over San Diego State. UVa. finished the job with a 14-10 win over USC to advance to the super regional round. The Cavaliers got some luck on the other side of the bracket and hosted the Super Regional round against Maryland. The ‘Hoos swept Maryland to advance to the College World Series.

In Omaha, the Cavaliers defeated Arkansas and Florida to begin the tournament, outscoring the two teams 6-3 in the first two games. Florida got even with the Cavaliers in the next meeting before Virginia advanced to the CWS Finals with a 5-4 win. Virginia, aiming for redemption against Vanderbilt, lost the first game to the Commodores before pitching at an extremely high level the final two games to win the series and the program’s first national title. It also was the ACC’s first national title since Wake Forest accomplished the feat back in 1955.

Virginia finished the tournament ranked third in team batting average (.248) and third in team ERA (3.25), while they also were third in fielding percentage (.989). Danny Pinero led the Cavaliers at the plate with a .391 average, while on the mound, Josh Sborz was unblemished in four appearances and Brandon Waddell had a 2.84 ERA in 19 innings, along with a .179 OBA.

How They Match Up: The Hurricanes, for the second time in three years, was the top national seed in the NCAA tournament and managed to win the national title. Meanwhile, this Virginia club did it the hard way, narrowly making the NCAA tournament as a three seed, going across the country and finding a way to get to Omaha and win the national title against Vandy. Miami has the star power advantage here by a significant margin, but the element of surprise is in. UVa.’s favor.

Miami has the star power advantage here by a significant margin, but the element of surprise is in.