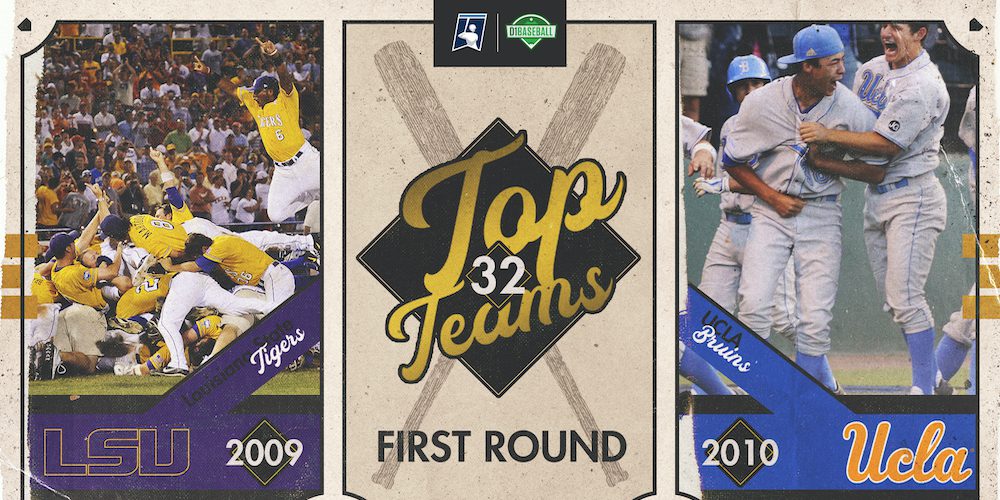 Today would have been the day four of the 2020 College World Series. Since we don’t have live baseball to watch, we’re taking a look back at the greatest CWS teams of the modern 64-team NCAA tournament era. In conjunction with NCAA.com, we’ve made our picks for the 32 best Omaha teams since 1999 and seeded them into a bracket.

Searching for its first national title since 2000, the Tigers seemed like a team of destiny throughout the 2009 season. LSU tied with SEC West foe Ole Miss to win the SEC regular season crown before winning the SEC tournament title with a 6-2 win over Vanderbilt. That set the stage for a magical postseason that included just one loss on the way to a national title. LSU swept Southern, Baylor and Minnesota in the Baton Rouge Regional before cruising past Rice in the BR Super Regional to make another trip to the CWS.

Once in Omaha, the Tigers opened the tournament with a 9-5 win over Virginia before cruising past SEC foe Arkansas, 8-1, to get into the driver’s seat on their side of the bracket. The Tigers defeated Arkansas, again, 14-5, to advance to the CWS Finals against Texas. In what was one of the more electric CWS Finals in memory, the Tigers won the first game 7-6, lost the second game 5-1 and crushed the Longhorns 11-4 in the final game to win another national title.

LSU finished the CWS that year with a .313 team batting average, which ranked fourth in the CWS field, while also having a 4.18 ERA, which ranked just behind national runner-up Texas. LSU had five players hit well over .300 during that trip, including DJ LeMahieu, Sean Ochinko, Micah Gibbs, Ryan Schimpf and Jared Mitchell. Mikie Mahtook, another Big Leaguer off this team, hit .296 with a home run and seven RBIs. On the mound, Anthony Ranaudo and Louis Coleman combined for seven appearances in Omaha, while Chad Jones and current LSU recruiting coordinator/assistant coach Nolan Cain had unblemished marks out of the bullpen.

The Tigers had athleticism and power offensively, and more than enough arms to be called one of the best teams of the modern era.

The Bruins had a strong regular season leading up to a national runner-up finish in the College World Series. UCLA went 18-9 in the Pac 12, finishing a full two games behind Arizona State in the league standings. However, they earned a regional host out in Los Angeles and didn’t disappoint. UCLA crushed Kent State, 15-1, before beating LSU 6-3 to setup a matchup with SoCal foe UC Irvine in the title game. UCLA won 6-2 to advance to the Super Regional round. There, the Bruins dropped the first game to Cal State Fullerton before beating the Titans in the final two games and scoring 19 runs in the process.

Once in Omaha, the Bruins crushed Florida, 11-3, before beating TCU 6-3 to move into the driver’s seat in their respective side of the bracket. TCU defeated the Bruins in the next meeting before John Savage’s club advanced to the CWS Finals with a 10-3 triumph over the Horned Frogs. UCLA was double-dipped and scored two runs in two games against South Carolina in the Finals. It was a disappointing end to the season, but it was one that was incredibly special for Savage and Co., especially when you consider the rich talent on the mound.

As a team, the Bruins finished the tourney fourth in hitting with a .271 clip, third in pitching with a 3.31 ERA and sixth defensively with a fielding percentage of .968. Individually, the Bruins had one of the more star-studded weekend rotations in college baseball history with Gerrit Cole, Trevor Bauer and Rob Rasmussen leading the way. All three are Big League starting pitchers, with Cole the best pitcher in baseball. Beau Amaral was the offensive leader that year with a .375 average, while Jeff Gelalich had a .308 average.

How They Match Up: The Bruins certainly would have the edge from a pitching standpoint with Cole, Bauer and Rasmussen leading the way on the mound, but the Tigers check most of the other boxes, especially from an offensive standpoint with a plethora of power, athleticism and production. I’d pay some serious money to see that Bruins pitching trio go head-to-head with the likes of Jared Mitchell, Ryan Schimpf and Co., for the Tigers.

The @UCLABaseball squad certainly would have the edge from a pitching standpoint with Cole, Bauer and Rasmussen leading the way on the mound, but @LSUbaseball check most of the other boxes. Who takes the dub?