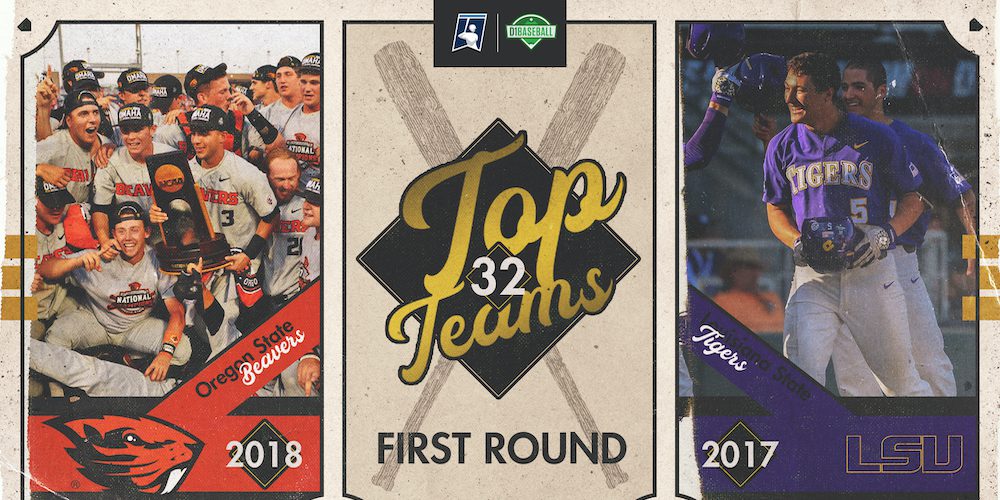 What a terrific matchup this is between the 2018 Beavers and 2017 Tigers. Though the ’18 OSU team got even with LSU in that postseason, the Tigers were the victors against the 2017 OSU squad in Omaha. LSU had a terrific regular season, tying Florida for the SEC regular season title before earning the No. 4 national seed. In the Baton Rouge Regional, LSU defeated Texas Southern and Southeastern Louisiana before shutting out Rice to advance to the super regional round against Mississippi State. There, LSU swept the Bulldogs in two games to make yet another trip to the College World Series.

In Omaha, the Tigers edged Florida State 5-4 to begin the tournament before Oregon State pummeled them 13-1 in the second game. LSU stayed alive with yet another win over FSU before getting even with the Beavers in the next two games, outscoring Pat Casey’s squad 9-2 in the two contests to advance to the CWS Finals against Florida. In the title series, the Tigers were narrowly edged by the Gators in the first game before UF won its first national title with a 6-1 triumph in the second game. National titles are the expectation in Baton Rouge, so it was a disappointing end to what was a terrific season.

LSU finished that Omaha trip ranked second in team batting average (.243), while also ranking fourth in team ERA with a 4.06 clip. LSU also finished fourth in fielding percentage. Electric outfielder Zach Watson was by far the team leader from an offensive standpoint with a .346 average, while catcher Mike Papierski had three home runs during the run. Meanwhile, lefthander Jared Poche was the headliner on the mound with a 1.65 ERA in 16.1 innings, along with nine strikeouts and three walks. Alex Lange also put together a strong start against Oregon State and tallied a 3.38 ERA in 13.1 innings, along with 16 strikeouts.

How They Match Up: Both of these teams would qualify as worthy foes, but Oregon State has the advantage in a few areas. The Beavers had much more star power from an offensive standpoint with Rutschman and Larnach leading the way, while Abel was on a path with destiny throughout the CWS. With that said, the Tigers had a pair of high-quality arms in Poche and Lange, and had disposed of the Beavers a year earlier. So, perhaps, this specific club would’ve had the Beavs’ number. We’ll never know.

Both @BeaverBaseball and @LSUbaseball would qualify as worthy foes, but Oregon State has the advantage in a few areas. Who do you think takes the W?