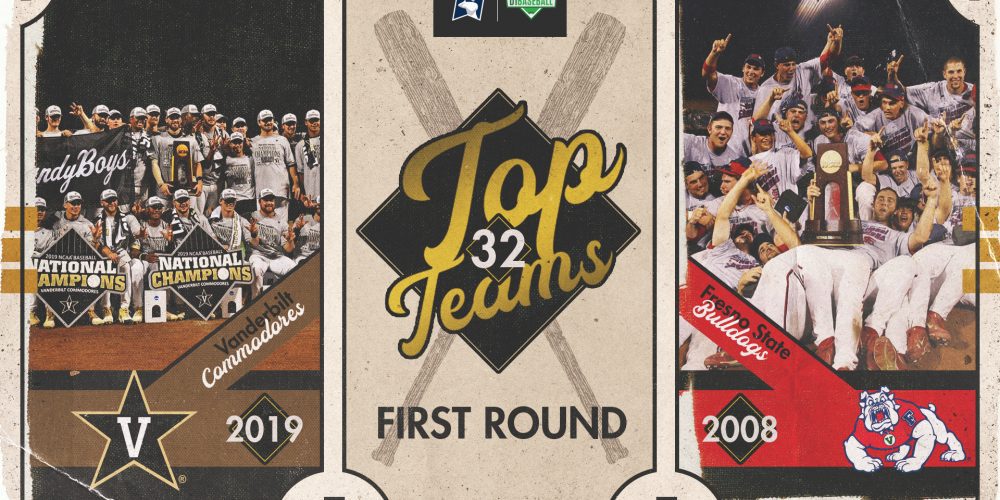 Today would have been the day five of the 2020 College World Series. Since we don’t have live baseball to watch, we’re taking a look back at the greatest CWS teams of the modern 64-team NCAA tournament era. In conjunction with NCAA.com, we’ve made our picks for the 32 best Omaha teams since 1999 and seeded them into a bracket.

The only regional No. 4 seed to win the College World Series, Fresno State’s mantra was “from underdogs to WonderDogs.” But it’s worth noting that this story was more like a phoenix rising from the ashes than a rags-to-riches Cinderella tale. Fresno State was well stocked with talent and entered 2008 with high hopes, ranking No. 18 in Baseball America’s preseason Top 25. But the Bulldogs got off to a brutal start to the season, stumbling to a 2-5 record after two weeks, and an 8-12 mark as late as March 21. Then Fresno righted the ship for a while, but the roller coaster ride continued, as it dropped 11 of 16 games from April 26 to May 17. With an overall record of 33-27 and an RPI in the triple digits, Fresno State had zero chance to earn an at-large bid to the NCAA tournament, so its only hope was to win the WAC tournament — which it did with a 4-0 run, igniting an improbable run all the way to the top of the college baseball world.

The Bulldogs won the Long Beach Regional in four games, taking out the host Dirtbags and then the Brian Matsuz/Josh Romanski-led San Diego Toreros twice in three games. That set up a super regional date in Tempe with No. 3 national seed Arizona State, a juggernaut led by Brett Wallace and Ike Davis. The Sun Devils blew out the Bulldogs in Game One, 12-4. But Fresno State’s bats got hot and carried the Bulldogs to wins in the next two games, sending them to Omaha for the first time since 1991. At Rosenblatt Stadium, Fresno took down national seeds Rice and North Carolina to start bracket play 2-0, then lost a rematch with the Tar Heels but won the winner-takes-all third meeting to reach the Finals against another national seed, Georgia. Fresno lost the opener, putting it in the familiar position of playing with its back to the wall, but its bats once again erupted for 19 runs in Game Two, and future major leaguer Justin Wilson turned in eight innings of one-run ball on short rest in Game Three to lead Fresno to a 6-1 win and the championship. Wilson made three heroic starts in Omaha, going 2-0, 2.21 in 20.1 innings.

But Fresno’s calling card was its quick-strike offense, which produced 14 home runs and hit .309 as a unit in Omaha, at the height of a very offensive era in college baseball. Tommy Mendonca earned CWS Most Outstanding Player honors but hitting four homers and driving in 11, while Steve Detwiler hit three long balls and had 11 RBIs of his own despite playing with two torn pinkie fingers. This team stood out for its offensive firepower, but also for its remarkable resilience.

How They Match Up: The 2019 Commodores earned the top seed for a reason: they have a strong argument as the best team in the 64-team era, and they’re a heavy favorite in this matchup against the lone No. 4 regional seed to win it all. Vanderbilt’s talent was elite on offense and on the mound, and it’s scary to think about the kind of numbers Vandy could have put up at Rosenblatt Stadium with BESR bats in 2008. But sleep on Fresno at your own peril — four separate national seeds learned that lesson in 2008. This Fresno team featured five players who reached the major leagues, so its talent level was legit also. And Fresno would be just fine carrying the underdog label in this matchup — that worked out OK for the WonderDogs in 2008.

Fresno State would be just fine carrying the underdog label in this matchup — that worked out OK for the WonderDogs in 2008.