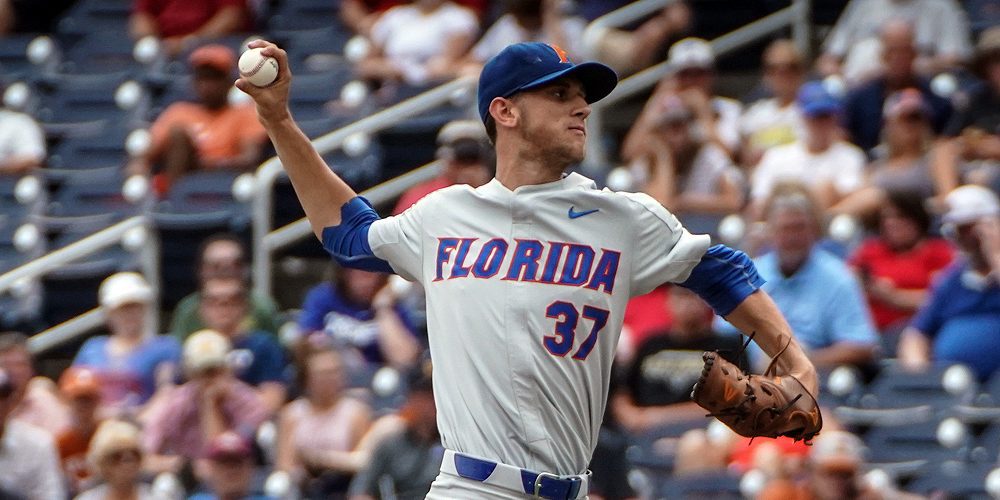 Florida’s Kowar Puts On A Clinic 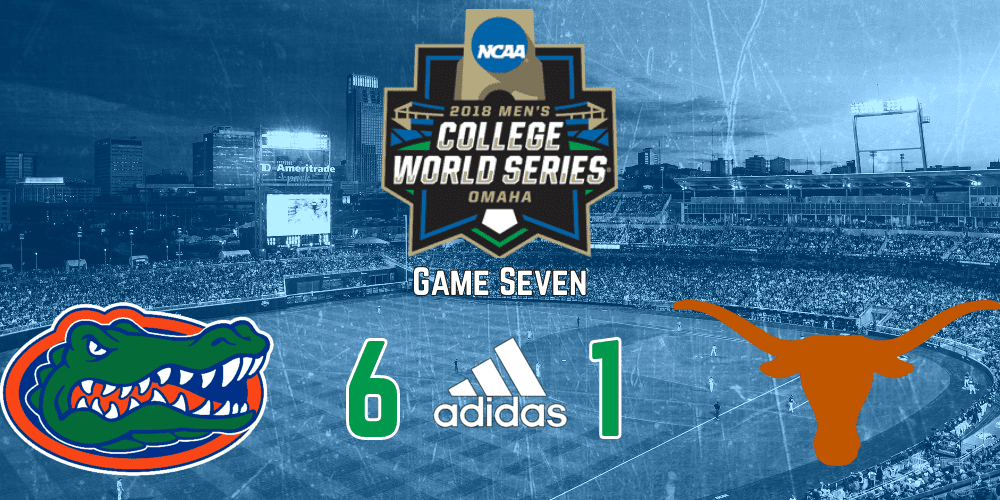 OMAHA, Neb. — Jackson Kowar wasn’t going to let Florida go out like this.

The Gators made history last season by storming through the College World Series and winning the program’s first national title. Just a few months later, the Gators entered the 2018 campaign with a full head of steam and lost one conference series before entering the NCAA tournament as the nation’s top national seed. Florida did what it needed to do to get back to Omaha, but in its CWS opener against Texas Tech on Sunday, the Gators deviated from the plan that has made them the nation’s premier program the past few seasons.

They didn’t play great defense. They didn’t have a great offensive approach. And most surprising, National Player of the Year and righthander Brady Singer started off dominant against Texas Tech before the Red Raiders figured him out in the middle innings with an excellent approach.

Therefore, the Gators entered Tuesday’s elimination game against Texas with their season on the line. Win and keep hope alive for a repeat national title. Lose, and the season would end in quite the disappointment.

Not on Kowar’s watch, though.

Singer and Kowar are close friends and the two have been such an impressive tandem over the past year. Though Singer struggled in the opener, Kowar, a fellow Royals draft pick, was there to pick up the pieces, putting together the best start of his career in a 6-1 win over Texas.

“Well, the biggest message before the game was if we’re going to get back into this thing we needed to have our starters go deep into the game. We couldn’t go to the pen in the fifth or sixth innings. After the first inning, he had thrown about 25 or 26 pitches and I just reminded him he’s going to have to be a little more economical with his pitches,” Florida coach Kevin O’Sullivan said. “So, to get almost even innings out of him with 13 strikeouts says a lot about how he was able to zone in and focus in after a 25-pitch first. As far as the stuff is concerned, it’s always good, but he tends to have that one inning where it kind of gets away from him a little bit, and that just never happened.

“When he has his changeup and breaking ball going like he did today, he’s really good. He’s really good,” O’Sullivan continued. “It’s probably the best I’ve seen him, to be honest with you. In terms of the whole package, and everything else, is concerned. I thought he was really good last week against Auburn and earlier this year against A&M in SEC play. But I think on this stage, I think this is about as good as he’s pitched all year.”

It might’ve taken three hitters into the game to get warm, but Kowar was tremendous against the Longhorns.

The biggest threat of the day came in the first inning when Kowar had a few nerves to begin the game. David Hamilton ripped a line drive for an out before he walked Duke Ellis and Kody Clemens ripped a single. Suddenly, Texas had two runners on, were threatening and Kowar was already on the ropes … or so we thought.

Kowar instantly flipped a switch. He punched out Texas power hitter Zach Zubia on a nasty 82 mph changeup before doing the same damage against DJ Petrinsky on an 83 mph changeup. Kowar’s changeup was a plus offering to finish the first inning, and that trend continued the rest of the game. 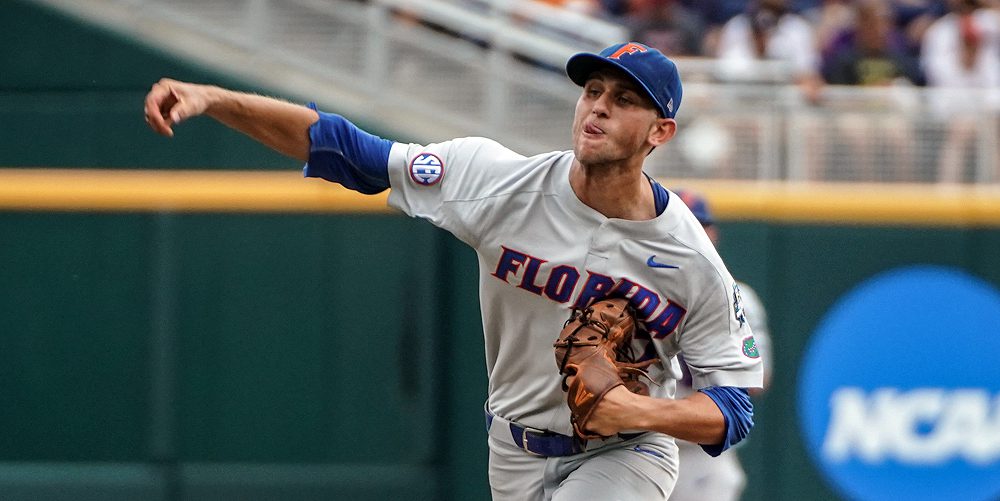 Jackson Kowar was brilliant for the Gators. (Mandy Sorenson)

“I think it was huge [to get out of the first inning unscathed]. The first inning, I really felt … the first three batters I didn’t make any quality pitches. I was lucky it was only first and third and one out on the liner out to left field,” Kowar said. “So, getting through that inning and kind of being able to settled in, especially after we had just scored in the first, it would have been a real let down for us had I given up a two or three spot there in the first.

“So, getting through that first was big for me,” he continued. “And then I was able to kind of get the fastball command working, and everything else played off that the rest of the way.

The rest of Kowar’s 6.2 inning performance with a career-high 13 strikeouts was an absolute clinic, and the righthander showed even more electric stuff than his partner in crime, Brady Singer, typically does. He was that good. Kowar was the first pitcher to strikeout 13 batters at the CWS since the UCLA duo of Trevor Bauer and Gerrit Cole did so back in 2010.

Kowar was most dominant in the third and sixth innings.

He struck out Hamilton to lead off the third on an 85 mph changeup before doing the same to Ellis on an 85 mph offering. Then, with Clemens back at the plate, Kowar attacked him with a barrage of heaters, smoking a 98 mph offering past his bat for a strikeout to end the inning. In the sixth, Kowar punched out Clemens again to begin the inning with a 97 mph fastball before striking out Zubia and DJ Petrinsky on 96 and 95 mph offerings, respectively.

“He was very locked in. The thing about Kowar is that when you have stuff like that, it’s one thing, but when you can mix stuff with command, that’s when you’re a first-rounder, and that’s what he is,” Texas coach David Pierce said. “He dominated with the changeup. And what’s interesting is we did a pretty good job of laying off of it early. And he immediately went to the curveball.

“He’s got an arsenal. That’s when you mix that in with the 94 to 96 mph fastball, it puts you in a position where maybe you cheat a little bit and get to the fastball. It’s not one of the easiest things to do,” he continued. “But we competed. We just didn’t come up with a hit when we had some guys in scoring position. And I think that’s a credit to him with the way he dialed it up.”

Kowar finished his performance in the seventh inning with more sheer dominance. UT got a single from Jake McKenzie and a double from Masen Hibbeler to begin the inning before Kowar, with his pitch count creeping up near 120, locked in for two more hitters. He punched out Tate Shaw before throwing one more nasty changeup to Ryan Reynolds for a strikeout.

His afternoon had come to an end. But his contributions today might be remembered for a long time should the Gators roll through this side of the bracket and play for another title.

“Yeah, I think kind of after the two guys got on, just like the two guys in the first, it was just fastballs that I left thigh high or mask high. And I tried to take a deep breath. We had a lead and I knew the only way they could come back is if I started walking guys and falling behind in the count,” Kowar said. “I knew If I attacked them and get two ground balls, we’d still be up two runs. My main focus was to avoid the big inning. Luckily, I was able to get to two strikes on both guys and make a couple of quality pitches.” 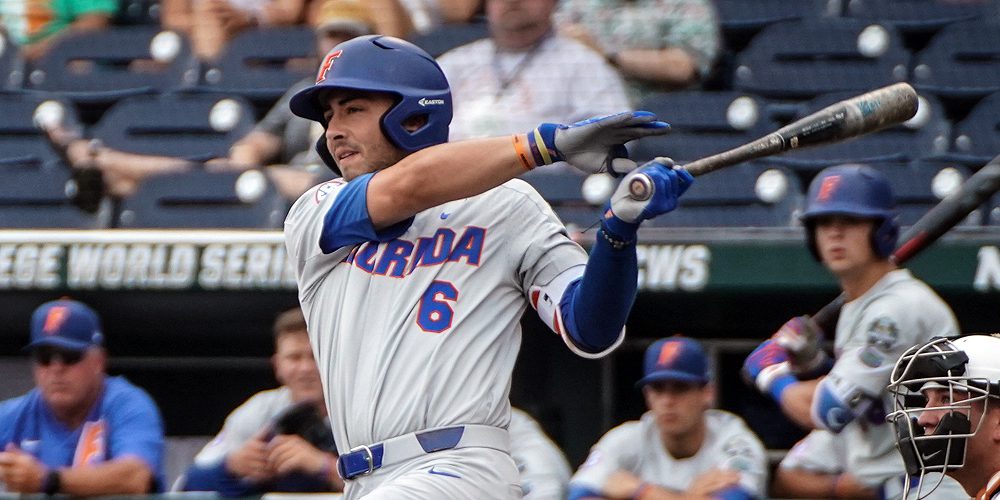 Jonathan India had a big blast for the Gators. (Mandy Sorenson)

While Kowar was dominant on the mound, the rest of the Gators did their jobs, too. Deacon Liput was back to looking crisp at shortstop, JJ Schwarz tallied his first hit since that knuckle injury and Jonathan India hit a majestic three-run blast in the sixth inning to extend Florida’s lead.

The Gators put together a complete performance. They want to defend that title.

As for the Longhorns, their season comes to an end with an 0-2 record here in Omaha. But it doesn’t diminish this team’s accomplishments. The ‘Horns appeared to be in some form of disarray after a home series loss to Stanford and an ugly showing a two-game midweek series against Arkansas earlier this year. A couple of weeks later, they hit the road and dropped a series to lowly Kansas State.

The Longhorns seemed to be in trouble. They weren’t. Texas played well down the stretch and won the Big 12 title before beating rival Texas A&M on the way to a regional championship and beating high-powered Tennessee Tech to get to Omaha. Texas had some clutch pitching performances along the way, and Pierce said he’ll miss some of the wacky walk-offs that defined their run the final stretch of the season.

But today, electric Kody Clemens and the Longhorns ran into a classic buzzsaw.

His name was Jackson Kowar.