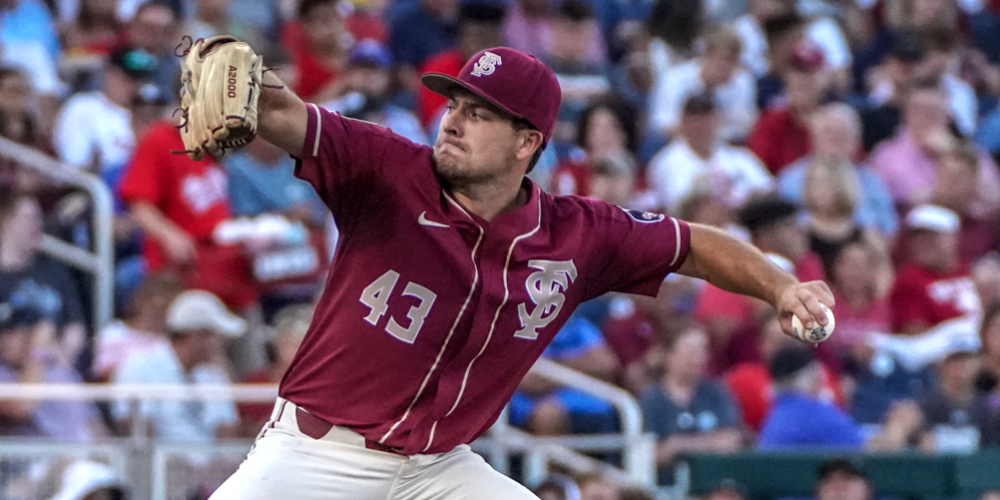 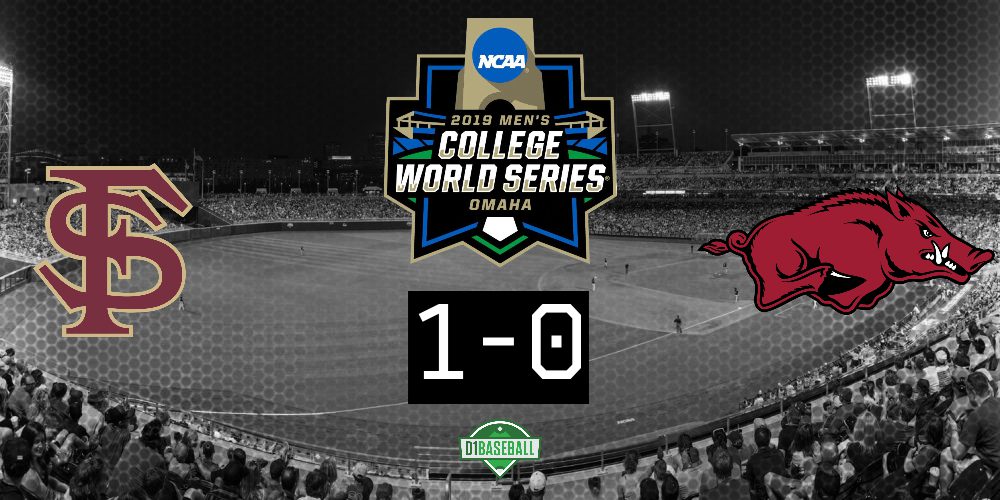 OMAHA — Leading up to Saturday night’s game between Florida State and Arkansas, there was plenty of debate around Omaha about whether the Seminoles should start junior lefthander Drew Parrish or electric righty CJ Van Eyk. Parrish was FSU’s Friday night starter all year long, but he’s had an up-and-down junior season, and he had allowed eight runs in 9.2 innings (7.44 ERA) during the NCAA tournament. Van Eyk, meanwhile, has truly come into his own as an elite power-armed weapon down the stretch, throwing six innings of one-hit ball in the ACC tournament, then eight strong innings in regionals and working into the eighth last week at LSU.

But FSU coach Mike Martin never wavered: Parrish is his ace, and Parrish would toe the rubber in the Seminoles’ College World Series opener.

“I’m one of those guys, and this is not superstition, because superstition is sacrilegious: We want Drew Parrish on Friday night,” Martin said, using the term “Friday night” as shorthand for the first game of the weekend, even though it is Saturday. “To flip now is just not — to me, it’s like taking your leadoff guy and hitting him seventh or eighth.”

Martin wanted to send a message of confidence, and Parrish has done plenty to earn that confidence over the course of his three-year Florida State career. On Saturday night, Parrish rewarded his coach’s faith once again, turning in eight brilliant innings in a thrilling 1-0 pitchers’ duel, leading the Seminoles to a win in their CWS opener for the first time since 1999.

For seven innings, Parrish and Arkansas ace Isaiah Campbell traded zeroes, as both of them made big pitches to escape trouble whenever men reached base. Campbell exited after seven scoreless, but Parrish stayed in the game through the eighth, when he allowed a leadoff double but stranded the runner at third base by striking out No. 2 hitter Casey Martin and 3-hole hitter Matt Goodheart on gorgeous changeups to preserve a scoreless tie.

The Seminoles scored their only run on a sacrifice fly in the top of the ninth, as J.C. Flowers crossed the plate and then sprinted out to the bullpen to loosen up for the ninth. The two-way star then worked a 1-2-3 ninth to end a riveting affair.

“Y’all saw the same game that I did, and that was just a masterpiece of pitching by these two men,” Martin said, gesturing toward Parrish and Flowers. “It was a game in which you’re on the edge of your seat the entire nine innings. It was extremely well played by both teams. Isaiah pitched beautiful baseball for them also. It was a game that, if you knew you could go to a baseball game [like that] every night, you would be big-time baseball fans, because that’s the way you hope that your team can play every night.”

Flowers came up huge in all three facets of the game — not only scoring the only run and earning the save off the mound, but also making the most dazzling catch of the first day of the CWS, leaping and crashing into the wall in left-center to rob Heston Kjerstad of extra bases in the second. Flowers rose to the occasion on the big stage, and so did Campbell, who stranded runners in scoring position in the second and fourth, then settled into a good rhythm over his final three innings to match Parrish.

“It’s fun when you’re battling, putting up zeroes,” Campbell said. “It’s the biggest stage in baseball and to do it in front of 26,000 fans, it’s special. We gave the fans a treat, pitchers’ duel, and I definitely found my groove, started having all four pitches and just felt more comfortable on the mound and just commanded all four pitches and just threw them for strikes, got ahead of more hitters and just got quick outs.”

Parrish also stranded men in scoring position in the second, third, sixth and eighth, benefitting from some great defense and some good fortune, but also making some huge pitches when it mattered most. Early in the game, Parrish was showcasing his 76-78 mph downer curveball, which had late, sharp bite and resulted in repeated chases out of the zone, though he also threw it for strikes.

But as the game progressed, Parrish started leaning more heavily on his changeup against both lefties and righties alike. Each of his final four strikeouts — two in the seventh and two in the eighth — came on disappearing changeups. Martin made a point to credit freshman Matheu Nelson for catching a great game, and he blocked a couple of tough changeups that Parrish spiked into the dirt in that critical eighth, with the go-ahead run 90 feet away. And then Parrish threw gorgeous changeups to finish off those dangerous Arkansas hitters. 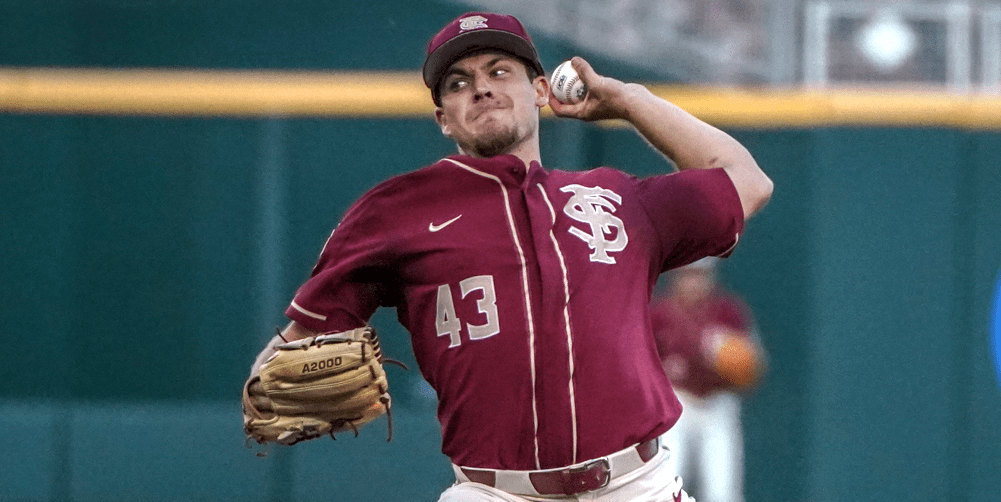 Parrish finished with nine strikeouts against two walks and five hits over his eight scoreless innings. He had more punchouts in the ACC tournament, when he fanned 13 Wake Forest hitters over 5.2 innings but yielded four runs (three unearned). But given the stage and the stakes and the stat line, this was clearly Parrish’s most impressive performance of the year.

“It’s probably the best game of my career,” Parrish said.

A third-team All-American in 2018 after posting a 2.52 ERA as a sophomore, Parrish has had his share of big-time performances in a Florida State uniform. But to shut out an explosive Arkansas offense for eight innings in the College World Series has to take the cake. Parrish entered the week with a 5.11 ERA on the season, but on Saturday he reminded everyone why he was a first-team preseason All-American heading into 2019. He is a proud, fierce competitor, and his breaking ball and changeup can both be devastating out pitches when he’s on, making him a tough matchup for any opponent.

“There’s no way that I can say that I haven’t seen Drew pitch this well. I’ve seen him pitch as well before. He’s just that kind of battler, that kind of competitor,” Martin said. “He’s a coach’s dream when it comes to — you know who your Friday night guy is. A great team player. The only thing I’ve seen him do wrong is stick his dadgum left hand out twice to catch a dadgum one-hop ground ball. That’s the one thing I get a little attitude with him about.

“But Drew Parrish is a great Seminole. He’s a good student. He’s a guy that has done so much for our program. He’s a great leader, one of our captains. This program will certainly miss possibly having him back with us next year.”

But now that Florida State is in the winners’ bracket, Martin has a pretty good chance to see his ace pitch at least one more time here in Omaha. The Seminoles know they have a long way to go, but they’re in awfully good position with Van Eyk scheduled to take the mound in a winners’ bracket game Monday against Michigan.

“I’m just ecstatic with the way the guys played,” Martin said. “They’re not thinking anything about the fact that we haven’t done a certain thing. They did find out when we were in the outfield that that was the first game that we had won on the first night in many moons. But I just think that this club has a good head on their shoulders. They’re not one to go out and think they’ve got it made. They know they’ve got a lot of work to do.”