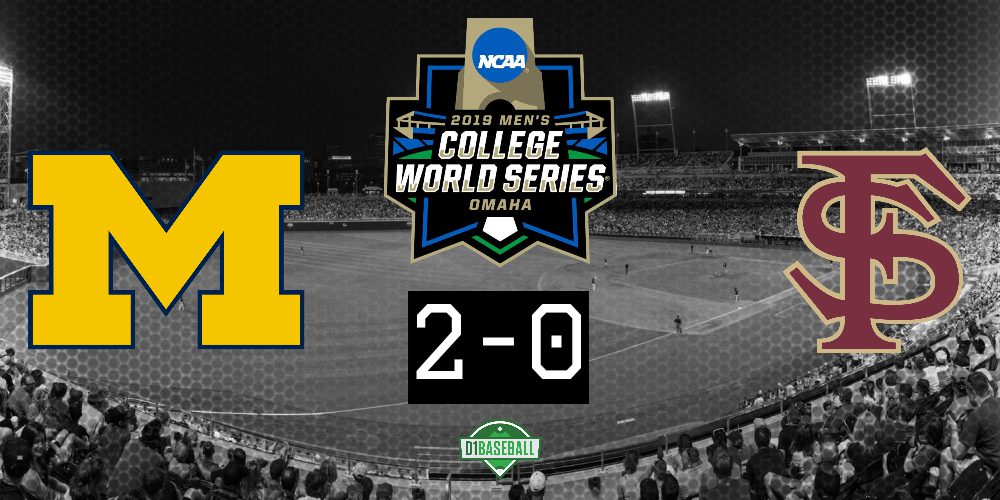 OMAHA — Tommy Henry was feeling “grumpy” on the way to TD Ameritrade Park on Monday afternoon. And that was a good thing for Michigan.

“That probably helped lock me in — sometimes I think I’m too nice,” said Henry, Michigan’s junior lefthander. “Karl [Kauffmann] tells me to go be a jerk out there, because you can see it in him: He’s a fierce competitor, he’s a dog out there. So I look up to that guy. I can’t speak highly enough of him, he’s been a role model to me. He helps me, inspires me to lock in.”

Henry attributed his crankiness to nerves, and he acknowledged that he felt those nerves in the first inning against Florida State. “I’m not gonna lie, my knees were a little bit shaky,” he said. “It’s the most people I’ve ever played in front of before, so it took a little bit to get used to.”

Well, it took maybe one inning for Henry to get comfortable. He allowed a double to Mike Salvatore leading off the bottom of the first inning — and then he proceeded to retire the next 12 Florida State hitters en route to a masterful three-hit shutout, leading the Wolverines to a 2-0 victory that secured their trip to Friday’s bracket championship round.

“In the biggest game in Michigan baseball history in a long, long time, we got the best pitching performance of Tommy Henry’s career,” said Michigan coach Erik Bakich. “He was the entire storyline tonight. We needed a strong performance, and he gave us something magical tonight. I think we’re all just in awe and very appreciative of holding down a very good Florida State team tonight, who’s been extremely hot and finding every single way to win. Tommy was just — I don’t even know if there’s an adjective to describe how good he was, but he was better than that.”

Florida State coach Mike Martin had the perfect adjective to describe how good Henry was: “That was a beautiful — that was a masterpiece,” Martin said.

No hyperbole there. Tommy Henry’s performance was downright beautiful, and it was a legitimate masterpiece.

Despite racking up 10 strikeouts, Henry needed just 100 pitches to go the distance, and 71 of them were strikes. He displayed an uncanny ability to get ahead early in counts, throwing first-pitch strikes to 24 of the 32 batters he faced. He carved up the zone with his 88-92 fastball, and he threw his late-breaking 80-84 slider for strikes or as a chase pitch, seemingly at will. He also featured an excellent diving changeup against some of FSU’s righties, using it particularly well the third time through the order. But the slider was the real difference maker.

Henry has always been able to spin a quality slider, but his ability to command the pitch has taken a leap forward over the last year under the tutelage of Chris Fetter, Michigan’s rising superstar of a pitching coach. Facing a Florida State lineup that featured five lefthanded hitters — most notably No. 2 hitter Reese Albert, No. 3 hitter Drew Mendoza and cleanup man Robby Martin — Henry’s slider was an unfair weapon. FSU’s five lefties went a combined 0-for-16 against Henry, with five strikeouts. Both of his strikeouts against Mendoza came on Sliders, as did one of his two strikeouts against Albert.

Henry said his command of the slider really came together toward the latter half of his 2018 sophomore season.

“I think that’s a direct correlation of having Coach Fetter working with me day by day,” Henry said. “I cannot stress enough how much I’ve learned from that guy. I sound like a broken record right now but seriously, I mean every bit of it. I’ve learned so much, and I think that’s helped with the consistency of that pitch, and just the confidence that he feeds into everyone on the pitching staff, that trust ability, being able to trust your stuff, throw it in any count. I think that all contributed. It was fun tonight.”

It was fun for catcher Joe Donovan, too. But that’s nothing new; Henry has been a model of consistency for three years at Michigan, posting a 3.19 ERA as a reliever in 2017, then a 3.09 ERA as a starter in 2018. He was downright untouchable for the first six weeks of this season, starting 5-1, 0.45 with 53 strikeouts against six walks in 39.2 innings. Bakich said Henry ran into a little adversity in the second half while pitching trough “a little bit of biceps tendinitis” and “misfiring a little bit up in the zone,” causing his ERA to jump. But Henry said he has felt 100 percent in the postseason, and he turned in a strong start against Creighton in regionals, allowing just three runs in 7.1 innings. A week later, he limited No. 1 national seed UCLA to two runs over seven strong innings to earn the win that sent Michigan to Omaha.

“The first thing I think about when I think of Tommy is his discipline and consistency and how truly consistent he is throughout the year, whether it’s in a fall long toss because he took a little bit of time to get back into it after a long summer, but his intensity when he’s doing whatever he’s doing is just ridiculous,” Donovan said. “You guys are just starting to see it now because it’s on a national level, but that’s been Tommy the entire year. Like the discipline to keep the balls low in the zone, to not miss. If he does have a miss, the next pitch was — I think he shook me off after a hung breaking ball, and the next one was one of the dirtiest ones I’ve ever caught from him.

“So that’s him in a nutshell is keeping the ball low in the zone, pounding it, discipline, taking breaths, the whole nine yards on it, and that’s been what we’ve seen from him this entire time. I know Coach will say the exact same thing, but I think you guys are just obviously starting to see it now, but that’s just Tommy Henry for you.”

Henry’s talent has never been in doubt; there’s a reason he was a Day One draft pick two weeks ago. His character and work ethic have never been in question either. On Monday, that talent and character shined through on the biggest stage college baseball has to offer.

“What you’ve seen the last few weeks is this guy opening up his chest and seeing his character and seeing his makeup,” Bakich said. “He’s an incredibly consistent person, like Joe made reference to. That’s why he’s elected captain. He does all the right things all the time, in the classroom, in the community. He’s an unbelievable teammate, and if we need him to pitch with the flu and a touch of pneumonia, he does it. We need the biggest performance in the biggest game of our season, he does it. He’s just an unbelievable kid.”