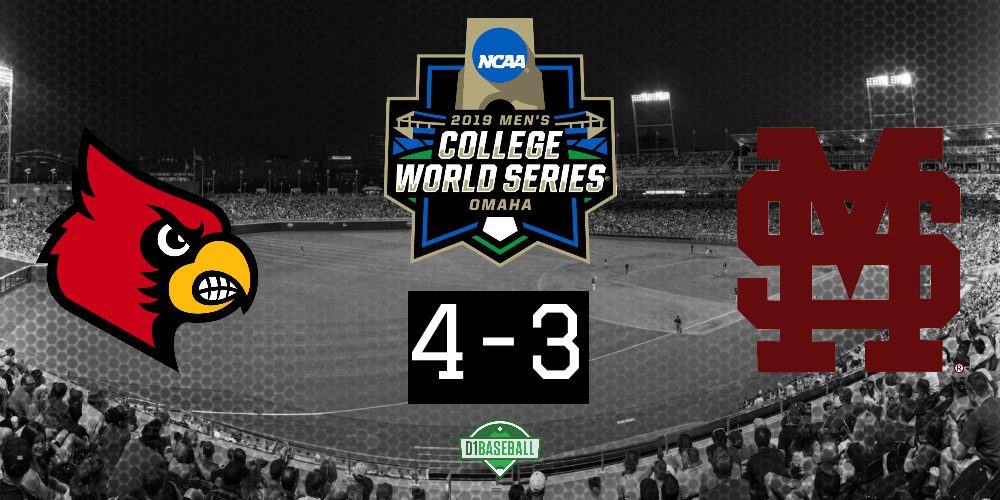 OMAHA — It’s not often you have a bittersweet feeling when walking a team off to stay alive in the College World Series and advance to college baseball’s Final Four, but Louisville coach Dan McDonnell felt a cascade of emotions Thursday night in a win over Mississippi State.

While Mississippi State seemed to be in total control of the Cardinals for much of the night, leading 3-0 after 6 1/2 innings, Louisville cut the MSU lead to 3-2 in the seventh and scored two runs in the ninth, including a walk-off single from Drew Campbell to beat the Bulldogs 4-3.

Campbell and the Cardinals took the celebration to the outfield. Campbell was mobbed, and rightfully so. He just saved Louisville’s season. But on the other side, MSU center fielder Jake Mangum laid on his back in shock, while several other teammates had similar reactions. Then, in the dugout, Chris Lemonis stayed in one spot, staring off into the distance. Was this just a dream? Was this magical MSU season really over? It was. And Lemonis grabbed his belongings and headed up the tunnel one last time this season.

Someone had to lose, and that’s what makes this result bittersweet for McDonnell.

McDonnell and Lemonis have obvious ties from their days at The Citadel, but the two are so much more than just Citadel alums. They’re best friends. McDonnell is an amazing coach. That much is true. But Lemonis was one of the primary architects of Louisville’s program becoming a national power. And his relationship with McDonnell as strong as it gets.

This was tough for McDonnell. You’re never prepared to face your best friend with a national title on the line. And the long-time Louisville head coach didn’t hold back emotions. When ESPN’s Kris Budden asked him on air about facing Lemonis tonight, he cracked, he broke down and he was emotional, all while his players were celebrating a huge elimination game victory.

A little later in the night, McDonnell was asked in the postgame press conference about facing Lemonis in an elimination game like this. And again, he had a tough time keeping things together. You could tell the thoughts were aplenty as the reporter asked the question. Then he answered, almost breaking into tears.

“Yeah, it’s hard,” McDonnell said cracking a little bit. “It’ll be hard to talk about it so I’m going to try not to. I don’t ever prepare for the season to end. You don’t ever mentally go there. It’s hard to. So, when the season ends, I have nothing prepared for what I’m going to say in the outfield and I have nothing prepared for this press conference. But it dawned on me that if we lost today, I would lose to one of my best friends.

“I thought, well Mike Martin is retired since he left last night, and I thought, okay, I’m not going to coach against him anymore, so who would I accept losing to more than any other coach in the country, and I thought isn’t this ironic. I’m playing against Chris Lemonis tonight. So it just gave me a soft spot from the go if it happens tonight, be thankful your best friend still has a chance to play. I did tell him, this is the place — if we have to do it [lose], we have to do it in Omaha. We sure hope we don’t have to do it ever again … especially in an earlier round.”

For much of the night, it looked like McDonnell would be the one on the losing end of things.

Louisville’s Nick Bennett gave the Cardinals four innings of work, allowing two runs and four hits in four innings of work. But while Bennett was gritty and certainly not bad for the Cards, UL had trouble getting much going against MSU freshman righthander JT GInn.

Ginn, looking healthy despite not having the velocity he normally does, sat 89-92 mph with his fastball and was terrific through six innings. He struck out two, walked one and allowed just three hits in six shutout innings. But with his pitch count creeping just over 80 after six innings, Lemonis decided to turn the game over to the bullpen. After all, Ginn missed time the previous two weeks with some arm soreness. so, even in this moment, he wasn’t going to risk another surgery.

Drew Campbell finished off the game with a walk-off hit. (Eric Sorenson)

MSU turned the game over to the bullpen in the seventh inning and experienced immediate trouble. Jared Leibelt walked the first two batters he faced before an infield single by Jake Snider loaded with bases with nobody out. MSU almost got out of the inning unscathed before Campbell delivered. UL had trimmed the MSU lead to 3-2.

The two teams traded zeroes in the eighth before MSU went quietly in the top of the ninth to setup a wild bottom half of the inning.

In the bottom of the ninth, Snider walked to begin the frame before taking second base on a bad throw by MSU reliever Cole Gordon. Danny Oriente drove him home with an RBI single before Campbell went to the plate with the scored tied 3-3.

He didn’t disappoint, lacing a walk-off RBI single to right-center field on a 2-2 count. The Cardinals had completed the improbable comeback. They were one of the nation’s final four clubs.

“Show your toughness and win the at bat,” he continued. “And I think Oriente won that at bat, and then he flipped it to Campbell. Those two at bats by those two guys really showed our toughness tonight.”

Lost in the hoopla of the walk-off hit, the Cardinals got huge contributions from the bullpen as well. With Bennett only going four innings, the bullpen would have to rise to the occasion for the Cards to stay alive. And that they did. Bryan Hoeing allowed a run in 2.1 innings, Garrett Schmeltz tossed 2/3 inning, Jared Poland struck out four in 1.2 shutout innings and Reid Detmers, the staff ace, even came out of the bullpen in the ninth.

It was a complete effort by the Cards.

“Yeah, we’ve been talking about depth with our position players, as well, and the bullpen came through yesterday. We have a five-inning game after Bobby Miller was able to throw four before it started raining. But again, the bullpen was huge today. Hoeing gives us 2.1 innings, you have a freshman in Garrett Schmeltz, and you said it for Poland. It was really good the first half of the year. He’s a position player who hurt his hand sliding into second base, so we lost him as a hitter. But he threw an inning in the championship game in the regionals on that Monday.”

With the win, the Cardinals are now two wins over Vanderbilt away from playing for their first national title. But this team has already made history. They’re the first UL squad to win two games in Omaha.

It was a night to remember for McDonnell and the Cardinals. Even if it was a little bittersweet.