OMAHA — It was fitting that with LSU’s season hanging in the balance, it had to turn to senior lefthander Jared Poche.

After Poche was drafted last summer, many around Baton Rouge thought he’d sign the dotted line and probably never pitch at Alex Box Stadium again. Instead, the Lutcher, La., native wanted one last hurrah. More importantly, he wanted one last chance to get to Omaha and help LSU win its seventh national title.

Last week in the Baton Rouge Super Regional, it’s safe to say that Poche didn’t have his best stuff. He allowed four runs on two hits and only lasted 2.1 innings against Mississippi State. He had a chance to tie the career wins mark in that game, and he didn’t get it done. He certainly didn’t want that to be his lasting legacy.

Tonight, as the Tigers needed a win over Seminoles, he did what he always seems to do when he’s needed the most – he put together an outstanding performance, one of his best of the season considering the opponent, a hard-hitting FSU team that has a tendency to drive opposing pitchers crazy.

Not only did Poche lead the Tigers to a 7-4 victory over the Seminoles, but he accomplished something that few thought he would when he showed up on campus four years ago – he became the career wins leader at LSU with his 39th victory. 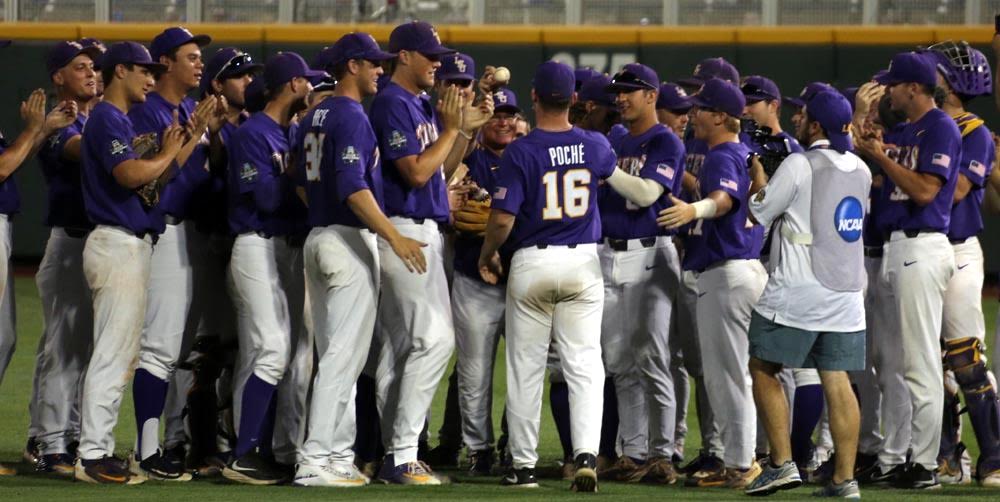 LSU’s Jared Poche had a night to remember in Omaha. (Eric Sorenson)

“If you would’ve told me four years ago before I even started my career at LSU that I would be in Omaha and break the all-time wins record, no way I’d believe that,” Poche said. “This record obviously shouldn’t just be an individual award. It’s having guys like Kramer [Robertson], Alex Bregman throughout the course of my career making plays and picking me up on defense. I couldn’t have done it without those guys.”

Watching Poche go to work the last four years has been a real treat for someone like myself who loves the consummate college baseball pitcher. Poche has never had overpowering stuff. Though he flirted with a fastball at 89-91 at times throughout his career, for much of this season, and tonight, he was mid-to-upper 80s with his fastball, while also showing excellent feel for the curveball, and at times, the changeup.

The book on Poche has always seemed simple – his stuff won’t blow you away, so just be patient and find your pitch. But the lefty has always found a way to get hitters out with his trademark pinpoint command when he’s in vintage Poche form.

That was the case against the hard-hitting Seminoles, too.

“He was able to throw all of his pitches with command. He was able to locate and mix things up a bit, which kept a lot of us off balance,” Nieporte said. “That’s all you need as a pitcher. And he had confidence as the game went on. And for every run they had, he put up a zero and only gained more confidence.

“I think he just showed why he’s a dominant pitcher right now,” he continued. “And he just had that it factor tonight. Our whole lineup, as [Andrew] Karp said, there’s not a better lineup in the country than we are, and he was able to go out there and do his thing.”

Poche set the tone early for the Tigers. He retired the first five FSU hitters he faced, recording a pair of strikeouts in the first inning on curveballs. Poche did allow a solo home run from talented young FSU slugger Drew Mendoza, but escaped further damage by getting Matt Henderson to fly out to end the innings.

FSU threatened in the fifth inning when Mendoza and Henderson led off the inning with singles. However, he got a beautifully-turned 5-4 double play and a fly out to escape potential damage. FSU scored a run in the sixth on a sacrifice fly and it wasn’t until the ninth inning that Poche allowed another run, as Nieporte and Cal Raleigh led off the inning with solo homers. The lefty was lifted from the contest at that point, but what an outing he had against one of the nation’s best.

“Jared was the key to the game, obviously. Florida State leads the country with base on balls and I think Jared just walked two in eight innings,” Mainieri said. “Just coming out right away and showing great command, I thought set the tone for the game and then we had that big inning.”

With the Tigers having the tough task of needing to beat Oregon State twice to advance to the title series, Poche’s start was a real luxury for a team needing to save some pitching. Mainieri admitted after the game he was just hoping to have Poche throw six innings, then turn the game over to Zack Hess. Instead, Poche went eight innings and struck out four and walked two, and Hess, who finished out the game in the ninth, did so in style by blowing away FSU’s sluggers with 96-98 mph heaters, along with a filthy breaking ball.

“Well, we used a lot of guys out of the bullpen the other day with very much mixed results. And we wouldn’t be able to play on Friday if we didn’t win tonight. So, I was hoping Poche would give us six innings. I was ready to go to Hess in the seventh, but we didn’t need to,” Mainieri said. “Then, I was hoping I didn’t need to use him at all. Unfortunately, he gave up the two home runs and I had to bring Hess in. but Poche was the man tonight.”

Indeed, he was, as he has been so many times throughout his career.

“There’s nobody more deserving, there’s nobody has been as unselfish or more of a team guy than Jared Poche, and you love that,” LSU shortstop Kramer Robertson said. “We came in together as freshmen, and I can remember the first time I talked to him, I couldn’t understand him. I didn’t know what he was saying to me.

“The first time I saw him on the mound, though, I knew he was the real deal and he had something special,” he continued. “He has more than just an ability to pitch. He’s got something else inside him that makes him special, and there’s a reason that he’s won more games than anyone else to put on this jersey. It’s been an honor to be his teammate, and I’m going to forever to be thankful for that.”

Poche won’t pitch again in Omaha unless the Tigers find a way to beat the Beavers twice. But tonight, he kept his team alive and made history in the process.

Jared Poche will forever be an LSU legend.