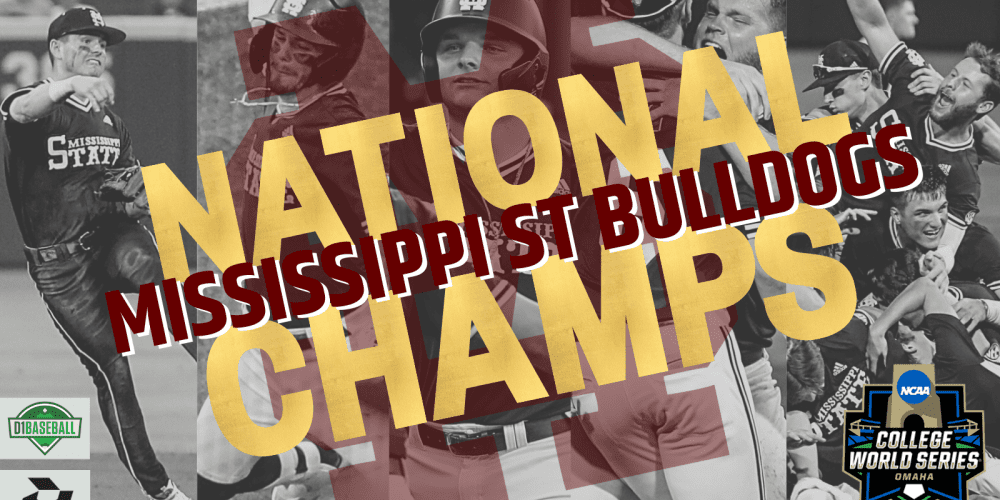 After decades of sustained excellence, Mississippi State has finally reached the pinnacle.

And when the Bulldogs got the long-awaited opportunity to win one game for the national championship, they pounced, and they sure made it count.

Mississippi State was in control from the very first pitch of Wednesday’s decisive CWS Finals Game Three against Vanderbilt, as leadoff man Rowdey Jordan lined Kumar Rocker’s first pitch into right field for a single — and the Bulldogs never looked back. MSU turned in as dominant a performance as you’ll ever see in a championship game — in any sport — pummeling Vandy 9-0 to claim that elusive first national title.

“It’s so awesome to bring back the trophy to Starkville. It’s our community and how much they love their baseball, it’s pretty special,” Mississippi State coach Chris Lemonis said. “I want to always reach out to Coach [Ron] Polk because Coach Polk is the one who built this and started it. We run out there and play in front of the big crowds, but Polk was a big reason why, and our former players, too. This is a lot of years in the making, and a lot of fun. And I know our fans will enjoy this.”

A day after out-hitting Vandy 14-4 in another blowout victory, Mississippi State out-hit the Commodores 13-1 in the finale, as Will Bednar and Landon Sims carried a combined no-hitter into the eighth inning.

Bednar’s performance in this College World Series is the stuff of instant legend — and eternal legend too, for that matter. For one of college baseball’s very largest, most passionate, and most hungry fan bases, the man who played an outsized role in delivering the school’s first championship in any sport seems destined to have a statue bearing his likeness erected alongside those of Will Clark and Rafael Palmeiro outside Dudy Noble Field. Heck, that statue might be built before the MSU plane touches down back in Starkville.

Bednar already turned in one of the great CWS performances of the decade in Mississippi State’s opener against Texas, striking out 15 over six innings of one-hit ball, on a tough night to pitch with the wind howling out. But he outdid himself Wednesday night, turning in six innings of no-hit ball on three day’s rest, with the national title on the line. He struck out just four, but he didn’t need to chase strikeouts, as MSU spotted him to a 3-0 lead after two innings, so he could focus on pounding the zone and pitching to contact. After laboring through a 25-pitch first inning and an 11-pitch walk to lead off the second, Bednar settled into a groove, retiring the next 15 hitters he faced to end his day after 90 pitches. By that point, the Bulldogs had a 9-0 lead, and there was no need to extend the prized prospect any farther. He finished the CWS 2-0, 1.47 with 26 strikeouts against six walks and five hits in 18.1 innings. To nobody’s surprise, he was named Most Outstanding Player of the 2021 CWS.

“Every time he’s taken the ball here in the postseason, he’s just been a champ,” Lemonis said. “And you need somebody to get hot for you in the postseason. And we had that with Will tonight.”

Another newly minted immortal, closer Landon Sims, took it the rest of the way, as usual. With three days of rest since his last relief outing, Sims came out firing his best stuff, blowing away the Commodores in order in the seventh. Vandy broke up the no-hit bid with a one-out single in the eighth by Carter Young, sapping the game of any drama it had left — would we see a no-hitter in a national title game? But that proved to be Vandy’s only hit of the game, as Sims worked three scoreless innings with four strikeouts to finish the CWS with a 0.90 ERA in 10 innings over four brilliant relief appearances, striking out 15 against just two walks and four hits. The second-year freshman righty was an utterly dominant force anchoring the MSU bullpen from the start of the year to the very end, never wavering.

“If you go back over the year, we gave him the ball in so many big moments, I don’t think he ever lost a lead,” Lemonis said. “The only time he got hit is I put him in a blowout in the SEC Tournament to get work, and that’s the only time he got hit all year long. I mean, he’s been just phenomenal. He was phenomenal here. … The year he had, most people haven’t had years like him in college baseball. And every time he pitches, it’s just so much pressure. And he’s performed every single time.”

The Mississippi State offense did waver a bit in Omaha, but a few quick strikes and dramatic comebacks kept the Bulldogs alive and got them to the Finals. And that’s when the offense really found its stride again, erupting for 22 runs over the final two games. While State piled on against bullpen arms lower on the Vandy depth chart on Tuesday, the Bulldogs beat the best of the best on Wednesday, scoring five runs (four earned) on six hits over 4.1 innings against the 2019 CWS Most Outstanding Player.

“Our kids played as free as you could be on the biggest stage, from the pitching to the defense, to the grind of having to beat one of the best pitchers in college baseball history and the defending champions,” Lemonis said.

As has been the case so many times over the last four years, Rowdey Jordan and Tanner Allen were right in the thick of the MSU attack, combining to go 5-for-11 with three runs and an RBI on Wednesday. Jordan, who scored the game’s first run after that leadoff single in the first, added an RBI double into the left-field corner in the second, then singled and scored again in the fifth. Allen singled and scored in the fifth, then added a double in the sixth. Like Bednar and Sims, Jordan and Allen will go down in history as two of the most important players in Mississippi State history, key cogs on three straight Omaha teams and leaders of the program’s first national title club.

“I’m on top of the world. I couldn’t be more happy for a team, a town, a fan base, the whole state of Mississippi, except Oxford, of course. Those guys are always on my back, so I had to take a shot at them,” said Allen, charismatic as ever right to the very end of his exceptional college career. “But man, this team overcame everything. From getting swept at home in front of 10,000 versus Arkansas, to Missouri coming in and taking a series from us and then getting embarrassed at the SEC Tournament, we just kept playing, and kept playing and playing. You blink an eye we’re national champions.”

Those stars weren’t the only heroes on Wednesday, of course. Luke Hancock and Logan Tanner gave MSU some cushion with back-to-back RBI singles up the middle in the fifth, firmly putting the Bulldogs in command. Tanner added a solo homer in the seventh to extend the lead to 6-0, and three batters later Kellum Clark added a three-run bomb to right-center, putting an exclamation point on the romp. That swing sent the party into overdrive in the stands at TD Ameritrade Park, where a vast sea of maroon and white filled up 24,052 seats — a record for a CWS Finals Game Three.

This championship truly was a total team effort, and we wrote earlier in the CWS about the key contributions of reserves like Tanner Leggett (whose walk-off hit sent State to the Finals) and Brayland Skinner (who pinch-ran, stole a key base and scored the winning run on Leggett’s single), plus fellow former Mississippi juco players Houston Harding and Preston Johnson (who came up huge on the mound Tuesday).

And don’t forget Lane Forsythe and Scotty Dubrule, who played flawless defense in the middle infield, leading the way for a Mississippi State club that fielded a cool 1.000 in Omaha, committing zero errors in seven games. That’s a striking contrast with a Vanderbilt team that made 13 errors in Omaha, including six in the two losses in the Finals. Mississippi State’s lockdown defense had a whole lot to do with delivering this title to the Bulldog fateful.

And the fateful will be celebrating this magical run deep into the night, and for years to come. The heroes of this run truly will live forever in Starkville. Of course, the end is always bittersweet, even for the champs. The mission has been accomplished, but so much of the joy truly is in the journey.

“Our journey is what I’ll remember,” Lemonis said. “You remember the players. I’m sitting there today in my hotel room and I’m writing Tanner Allen’s name down and Jordi and Will Bednar, it was hard. I got emotional in our team meeting because I’ve enjoyed coaching them so much, enjoyed being on the journey with them.

“You enjoy it. This team won’t be together on the field together. I’m just glad they’ll finish as legends. When you go to Starkville, Mississippi, and you’re around 20 years from now, they’ll be remembered by everybody.”