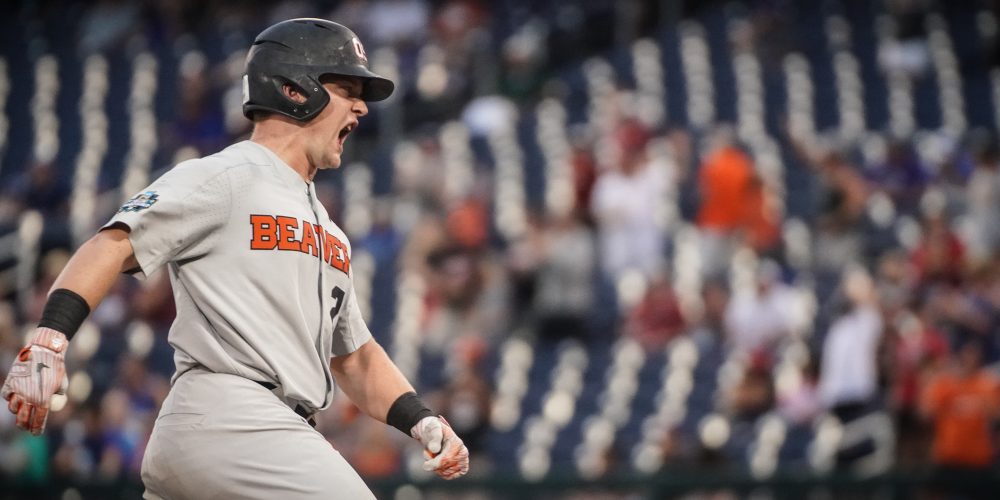 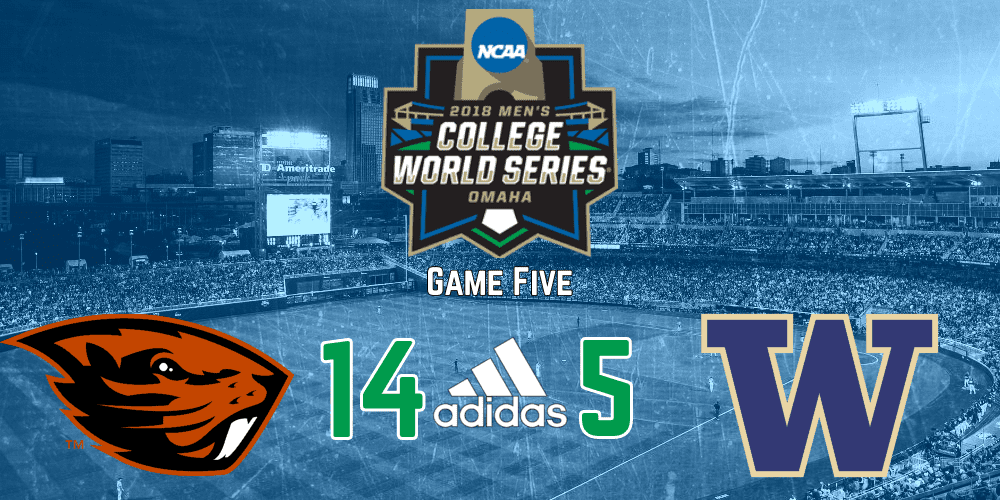 OMAHA, Neb. — It might’ve taken 13 innings, but the real Oregon State finally showed up at the College World Series.

Everything went wrong in the Beavers’ opening game of the CWS against North Carolina. Lefthander Luke Heimlich showed little command against the Tar Heels, while a typically excellent defensive team was sketchy in the field with Cadyn Grenier, Steven Kwan and even rock-solid catcher Adley Rutschman making mistakes.

That trend seemed to continue early Monday afternoon as the Beavers trailed rival Washington 3-0 after four innings and 5-4 after five innings. One of the nation’s premier offenses also mustered just one hit through the first four frames. And while they struck for four runs in the fifth, they were still trailing heading to the sixth after UW scored two in the bottom of the fifth. Nothing seemed easy, or right, for this team.

But everything changed in the sixth inning, with an assist from Mother Nature.

Oregon State loaded the bases with two outs before storms rolled through and we were hit with a four hour, 31 minute rain delay. When play resumed, OSU nine-hole hitter Tyler Malone walked to tie the game. OSU fans roared and the Beavers proceeded to score four runs in the seventh and five more in the ninth to stay alive in the CWS with a dominant 14-5 win over the Huskies.

“You know that if you take any club in the country, and you can go through certain times and they don’t score a lot of runs if they don’t hit. Hitting is just so contagious, and earlier this season, we played Hartford and we struggled and struggled and struggled,” Oregon State coach Pat Casey said. “And then we played Stanford, and boom, boom boom. We just needed to get something that would get us going and a little excited.

“And I think a couple of those guys in the middle of our lineup were trying to do it all at one time instead of doing what we do,” he continued. “And then we got some baserunners. We got some energy, and then we were off to the races.” 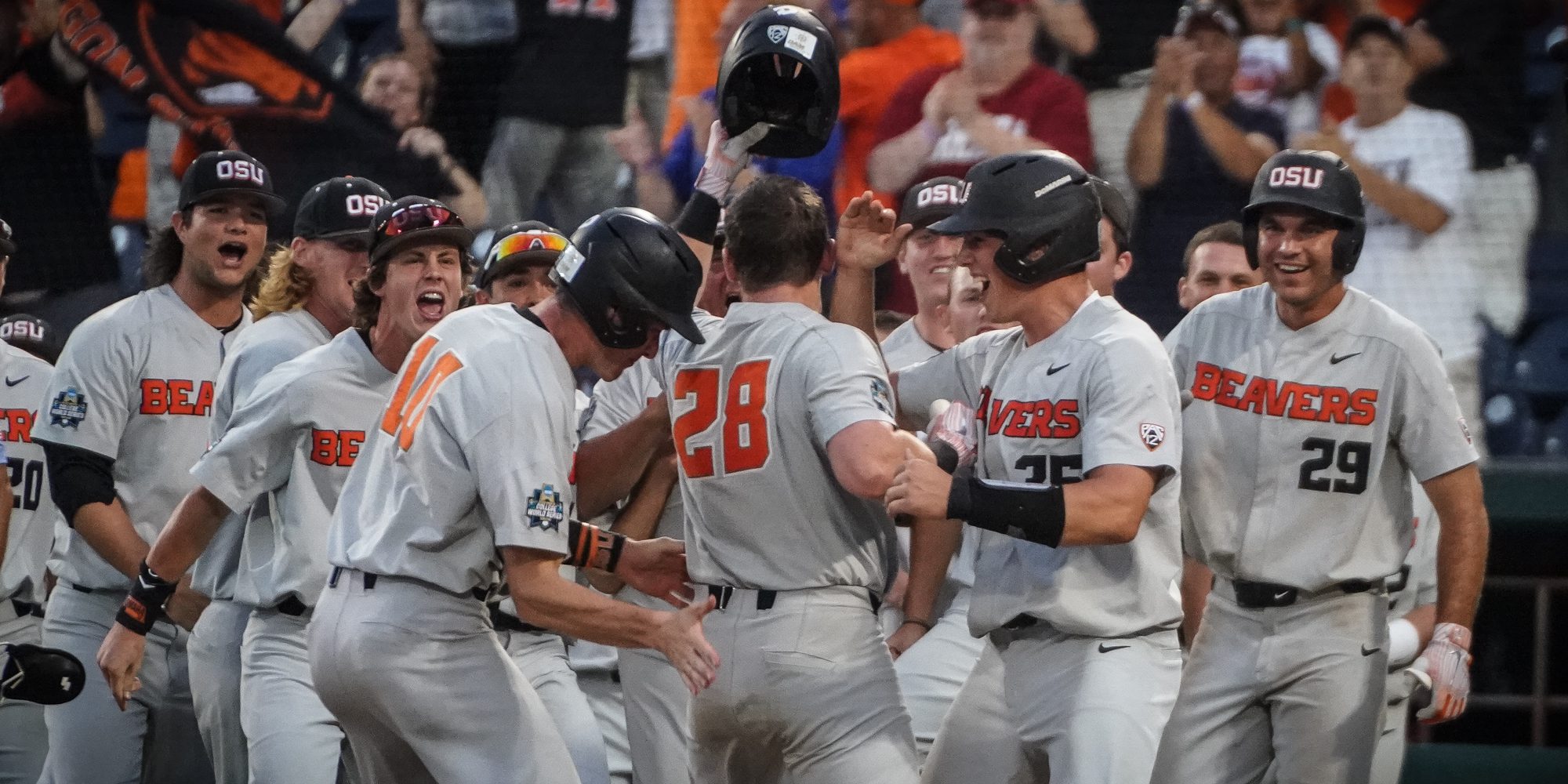 There was a reason for the Beavers’ looseness and energy when played resumed after the lengthy rain delay.

Some teams tend to keep the locker room low key during rain delays. Well, not the Beavers. Oregon State’s Tyler Malone, who had that key bases loaded walk in the sixth inning, and Kyle Nobach, who hit a key three-run home run in a four-run seventh inning, offered up the apparent winning formula for the Beavers.

It included a 30 bubble gum piece challenge, a game called ‘Mafia’ and a motivating speech from junior second baseman Nick Madrigal, who clearly didn’t want to see his and others’ careers come to an end so abruptly.

“Joe Casey did a 30 bubble gum piece challenge and stuffed 30 pieces of bubble gum in his mouth,” Malone said with a laugh. “It was out to here [gesturing with his hands], and he looked like a chipmunk, so we kept it pretty loose.”

As for Nobach’s take on things …

“Yeah, we just got together. We played a little game called Mafia. It’s a little game we played together. We had a little bit of fun and vibes and listened to some music. Before we went out, Nick got our guys up, too,” Nobach said. “He’s been our leader and he gets us going. He talked to us and we came out ready to play with some energy. So, it was good.

“Nick just talked about how there were a lot of guys in our locker room, and how it’s win or go home at this point, and there are a lot of guys that would never put this uniform on again,” he continued. “It means a lot to us, and a lot of people don’t really understand it until you play here and you’re around Case and the program. That’s motivating for us and we don’t want to go home. There are some guys in that locker room that will never play a baseball game again. That’s including myself and Jack and so that’s what motivates us, and that’s what his message was — just to strictly compete.”

And compete they did. OSU finally looked like the Beavers we expected to see here in Omaha.

When play resumed, Malone headed to the plate with an 0-0 count. Washington’s Alex Hardy got ahead in the count 0-1, but the Oregon State slugger showed good pitch selection and worked four-straight balls to tie the game at 5-5.

Though the Huskies worked out of additional damage in the sixth with a strikeout of leadoff hitter Preston Jones, the Beavers dugout and crowd were abuzz and the flood gates had officially opened.

In the seventh, Cadyn Grenier grounded out before Nick Madrigal singled and Trevor Larnach struck out. But with two outs, as the Beavers did all-day long after the fourth inning, the wheels were put in motion. Rutschman was intentionally walked before Michael Gretler hit an RBI double. A batter later, Kyle Nobach, who missed last season’s run to the CWS because of an injury, deposited a three-run home run over the wall in right-center field to make it 9-5.

The Beavers tacked on five more runs in the eighth, which included singles from Madrigal, Larnach, Rutschman and Gretler before Jack Anderson smacked a double and Tyler Malone hit a home run to cap off the scoring. Just like someone flipped the switch on a breaker, the Beavers were rolling and put the exclamation point on an impressive victory.

“Everybody talks about their strength and their power and the balance they have, but really what’s remarkable about what they do is the way they can separate balls from strikes. I mean, they just do not chase pitches out of the strike zone,” Washington coach Lindsay Meggs said. “And I mean that. It’s tough to get kids to be patient and to not chase, and when they have leverage in the count they don’t chase, and when they’re down in the count they don’t chase. 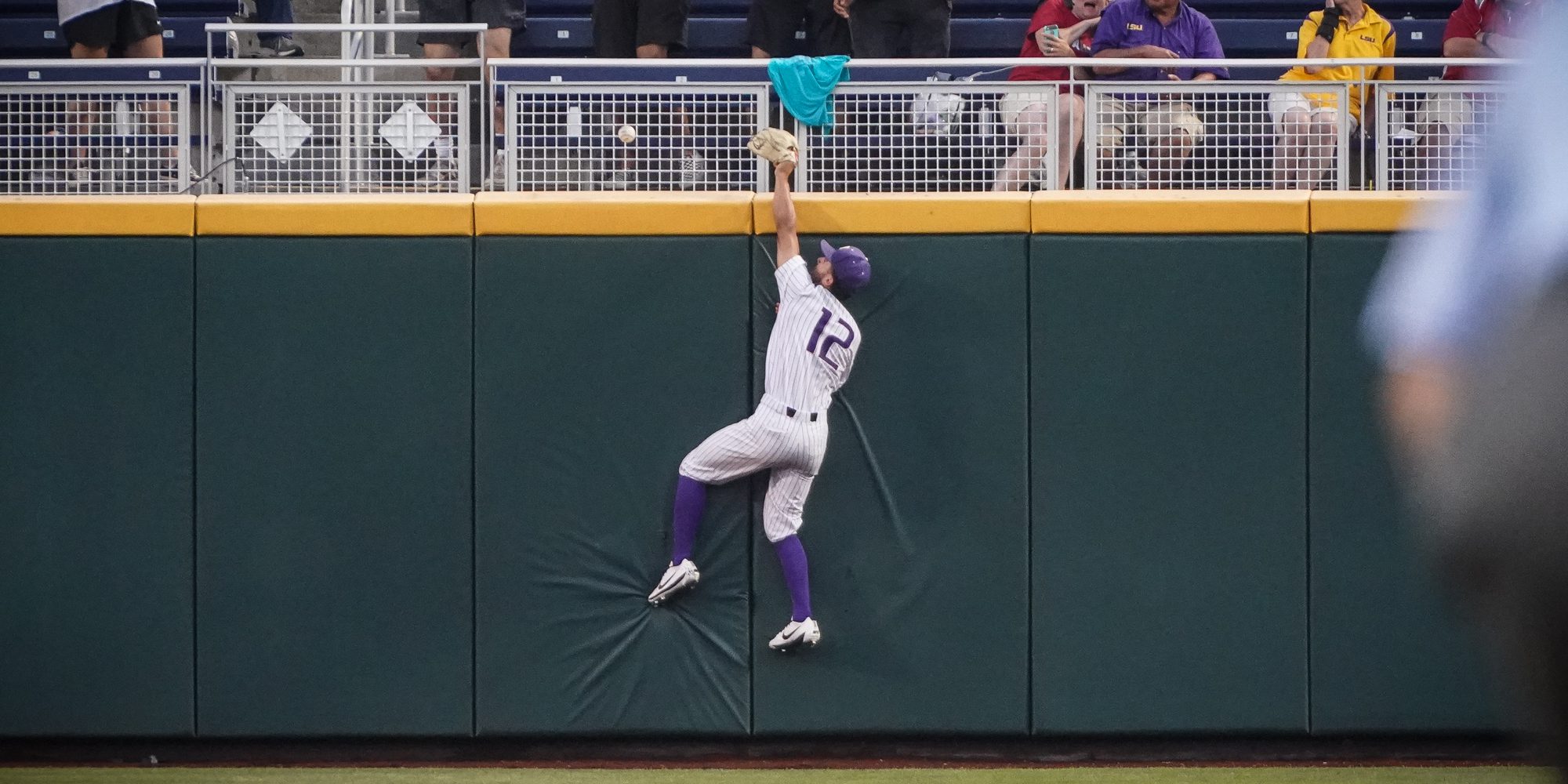 “A great example of that is when we come back form the rain delay with bases loaded and we throw strike one and you think we’re in good shape. We end up throwing four balls in a row that are not ideal pitches, but some pitches some would swing at,” Meggs continued. “I give them a lot of credit. People talk about how athletic they are. They talk about the kids that they have that are high draft picks, but those coaches have done a phenomenal job to get those kids to buy into a hitting plan that is second to none.”

Oregon State has a new lease on its life here at the CWS, and as a program, it’s familiar with coming out of the loser’s bracket to accomplish big things. In 2006, Casey’s Beavers lost the opening game of the CWS, 11-1, to Miami before storming through the loser’s bracket and ultimately winning their first national title with a series win over North Carolina.

Some things will need to be figured out for the Beavers to reach that goal.

Usual third starter Kevin Abel likely won’t be available to pitch on Wednesday. Abel worked 17 pitches before the rain delay and went back to the mound after the rain delay. He threw 58 pitches. So, someone will obviously need to step up from a pitching standpoint in the next contest with Abel not starting.

There’s also the injury situation with Steven Kwan. The electric OSU outfielder left the game in the early innings because of some discomfort in his hamstring. Casey said after the game he wasn’t sure if Kwan would be able to play in the next game or the rest of the CWS, but given cramps were the issue, you have to like his chances to return. Clearly, not having Kwan in the lineup hurts, though Preston Jones, his replacement, hit a key two-out two-run double in the fifth inning.

For four innings Monday afternoon, the Beavers looked like a team destined to head home in disappointment and with an 0-2 record in this CWS. But they scored a few runs in the fifth, the rains came in the sixth and everything else just seemed to fall into place.

Maybe the real Beavers finally stood up. If so, watch out.