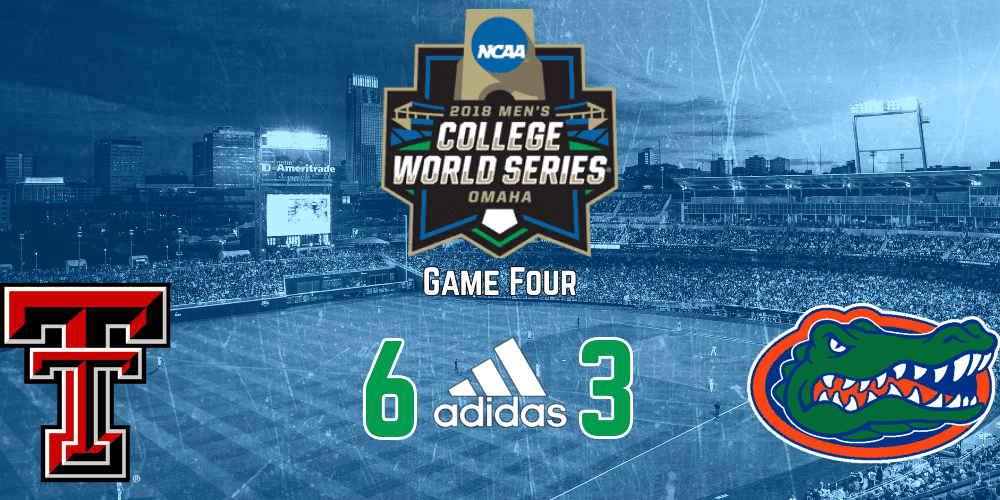 OMAHA, Neb. — It’s not often the National Player of the Year is left speechless and stunned on the mound.

Sunday night’s game between Florida and Texas Tech was the exception.

Florida righthander Brady Singer had been outstanding in his first two starts this postseason, allowing just four runs in 13.2 innings of work. But against Texas Tech to open the College World Series, Singer looked sharp early before the Red Raiders made adjustments and hit him hard en route to a 6-3 victory.

His frustration was most evident in the middle of Tech’s two-run sixth inning that included four hits — three of them singles. Florida coach Kevin O’Sullivan walked to the mound for a meeting and Singer stared off into the distance as if he was wondering what exactly had just happened.

It was the feeling many opposing pitchers have had against the hard-hitting Red Raiders at times this season. Singer, for once, was just another guy, and he didn’t get much help from his defense, either.

“And I think they just did a good job,” he continued. “They didn’t miss some pitches, but obviously we didn’t help Brady out defensively in the fifth. But credit their hitters, they did a really nice job.”

Singer looked like his usual self the first three frames against the Red Raiders, but that didn’t last.

He seemed to set the tone in the first inning, getting a pair of ground outs, while he punched out Brian Klein on a nasty 94 mph fastball on the inner half of the plate. Singer also was strong in the second. He allowed a leadoff single, but settled down to strikeout Zach Rheams and Michael Davis on 94 and 93 mph fastballs, respectively, before inducing a liner to Cam Warren. He again allowed the leadoff runner to reach base in the third before getting a fly out and double play to end the frame. 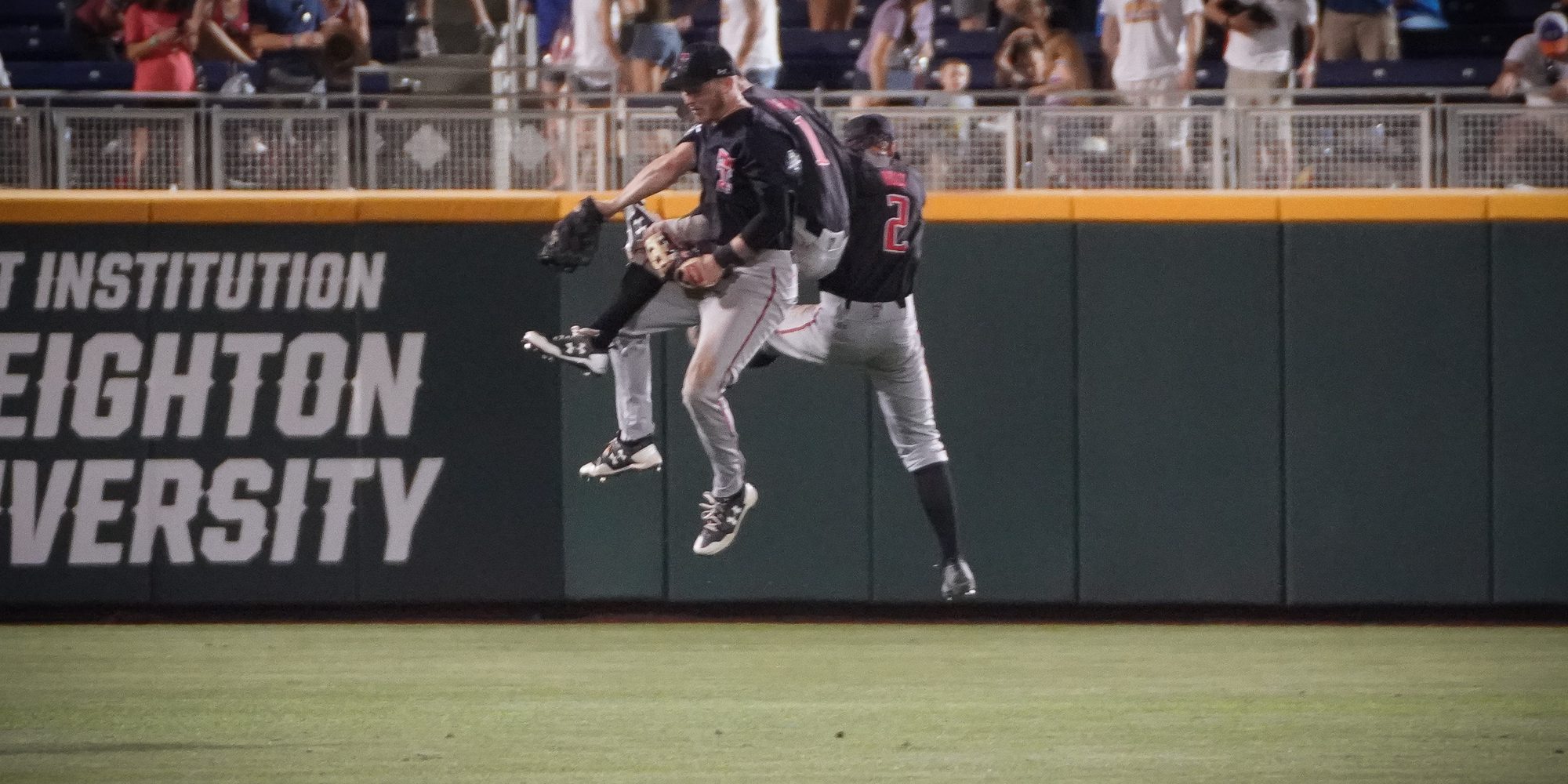 Everything changed for Singer and the Gators in the fourth, fifth and sixth innings. Tech scored its first run on a sacrifice fly by Grant Little after a balk and a passed ball in the fourth before tacking on two more runs on a Gabe Holt single in the fifth, the inning aided by an uncharacteristic error by shortstop Deacon Liput with two outs. The Red Raiders also received a boost that inning from Warren, who worked a 14-pitch at bat that sent Texas Tech fans to their feet in unison despite popping out.

“You know, I’ll tell you, we got an aggressive group. You don’t ever have to worry too much about them moving on the ball in the middle of the plate. We probably stayed with that throughout, for the most part,” Texas Tech coach Tim Tadlock said. “But it’s not a blanket deal, 1 through 9, by any stretch.

“I thought our guys had some really good at bats. I think what really kicked it off to me was Cam Warren’s at bat [in the fourth],” he continued. “He runs his pitch count up. That was just an at bat that really set the inning up as far as that goes. He got out, but when you see that, you get a guy up there in the 20s [pitches], you got a chance. We’re just fortunate enough to have a few guys who can swing it a little.”

The woes continued in the sixth. After getting a groundout from Josh Jung to begin the inning, Little, who had a huge night at the plate, once again showed a strong approach against Singer and roped a single. He stole second before Zach Rheams smashed an RBI double up against the right-field wall on a 92 mph fastball. Michael Davis and Warren hit back-to-back singles, and by the time the inning ended with a double play, Singer had allowed two runs and four hits and the Gators were sitting at a 5-1 deficit.

So, what was the approach against Singer?

“I knew he was going to try to pound the zone probably early and often,” Texas Tech’s Grant Little said. “He’s always been around the zone. He was living on the outside part of the plate. And I just tried to make an adjustment and put a couple of swings on some balls.

“Normally, after you see the guy the first time, you get a little more comfortable,” he continued. “And I figured that he might try to get on my hands a little because he lived on the outer half my first two at bats, and tried to do that with the slider.”

Texas Tech put together a complete offensive performance against Singer and the Gators. Sure, it had some help with some sketchy defense at times, but Little finished the night with three hits, Farhat and Jung each had two hits and spark plug lead off hitter Gabe Holt, who sets the table for this lineup, had two hits and three RBIs.

“We just kept playing and played the game the right way. And we strung together a couple of good at bats,” Holt said. “And our bullpen was phenomenal tonight and they kept us in the game. But again, we put a couple of swings on balls and they happened to find holes. Just a lot of quality at bats out there.”

Those quality performance permeated to the pitching staff, too.

While Florida looked to get it done with an orthodox approach and Singer on the mound, the Red Raiders did so in a way that would make former Mississippi State coach John Cohen smile. If you remember back to 2013, the Bulldogs played for a national title after piecing together their pitching staff in unorthodox fashion all the way to the championship series against UCLA.

Texas Tech has employed that same strategy at times throughout this NCAA tournament run with lefthander Dylan Dusek and veteran righthander Ryan Shetter leading the charge.

The Texas Tech pitching staff rose to the occasion in big spots, too. (Mandy Sorenson)

In the regional opener against New Mexico State, Dusek allowed two hits in two shutout frames against the Aggies before he was lifted for Shetter, who tossed five strong innings. A week later against. Duke, a similar scenario played out. Dusek allowed a run on two hits in 1.2 innings, while Shetter, again, relieved him and proceeded to allow just two runs in 4.2 innings.

Once again, that strategy worked to perfection. Only this time it was on the biggest stage and against the defending national champions.

“I guess the word’s out,” Tadlock said. “First of all, I think both of those guys can really pitch. They can both execute pitches. I think they’re both selfless in what they do.

“There are a lot of guys in Ryan’s shoes that’d rather start, and there are a lot of guys that when you pulled them in the second inning would probably rather not come out,” he continued. “But they know what we’re doing. We’re doing it for the good of the team and that’s kind of our plan going in. And it’s been neat to watch.”

It was especially neat to see against the battle-tested Gators.

Dusek avoided damage the first two innings before getting lifted from the game after a leadoff walk to Deacon Liput in the third. Shetter entered and put together one of his better outings of the season at precisely the right time.

Shetter retired nine of the first 11 batters he faced and struck out seven, walked one and allowed just three hits in 4.1 innings. The veteran used multiple pitches against the Gators, with the curveball proving to be an admirable weapon. The Red Raiders also received a strong performance from fellow righty Ty Harpenau, who allowed a run in 2.2 innings to close out the contest.

Unorthodox? Sure. But it’s working.

“It’s got maybe a little to do with strategy,” Tadlock said about the pitching approach. “And maybe it’s also because it’s what we need to do. We really felt like those guys could do what they’re doing because they’ve been doing it for however long now — three or four weeks. It was really to setup for Saturdays and Sundays, but also with the goal in mind of getting here and being able to do some damage once they got here.”

Should Texas Tech continue to play the way it did Sunday night against Singer and the Gators, plenty more damage will be done in Omaha before the Red Raiders are finished.

Perhaps the Red Raiders are only getting started.