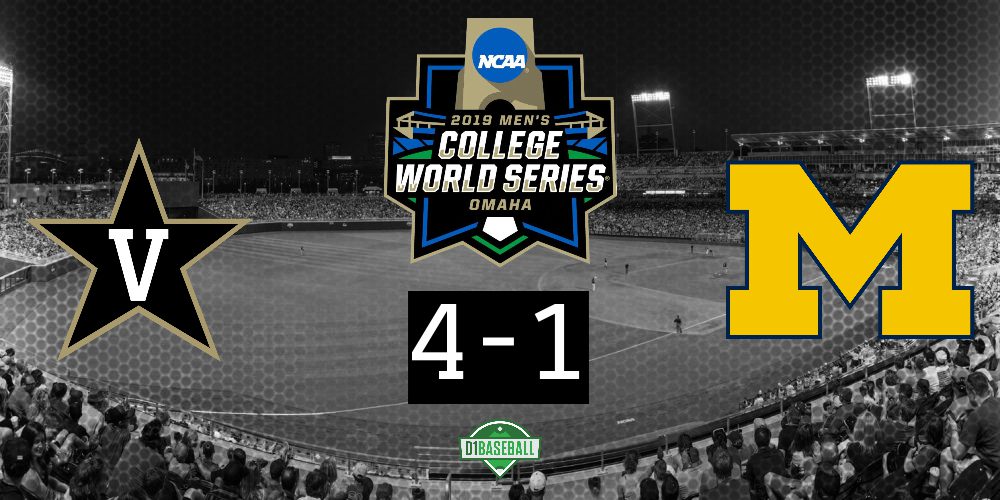 OMAHA — Kumar Rocker is just a freshman. Yet, with a national title hanging in the balance Tuesday night, Vanderbilt couldn’t have felt more comfortable with him on the mound.

Rocker has earned that type of respect with the way he’s pitched in the postseason, and he didn’t disappoint coach Tim Corbin and the Commodores. Rocker put together his fourth outstanding start of the NCAA tournament and second of the College World Series, as Vandy forced a winner-take-all CWS Finals finale with a 4-1 win over Michigan.

And Rocker is to thank for that. While righthanded reliever Tyler Brown closed out the contest in impressive fashion with 2.2 shutout innings for the Commodores, Rocker, the strapping and imposing freshman, set the tone for the evening.

Perhaps we shouldn’t have been surprised considering the way he looked against Duke in the Nashville Super Regional or the performance he put together against Mississippi State earlier in the CWS, where he struck out six, walked one and allowed just one run in six innings against one of the nation’s more balanced offensive lineups.

But in a way, we were still a little surprised by just how dominant he was Tuesday night against the Wolverines. Rocker showed no nerves as a true freshman in this type of situation, and this against a Michigan offensive lineup that had caused issues for many opposing pitchers throughout this tournament.

Rocker was different. He was poised, locked in and once again showed premium stuff throughout.

He was so good that Corbin couldn’t recall seeing a freshman throw this well in a huge situation.

“I haven’t because I don’t think we’ve had a freshman in that situation before,” Corbin said. “I attribute it to his maturity and how he prepares.

“That was the one thing that stood out to me when I was talking to Browny [Scott Brown] about him down in the pitching lab back in October,” he continued. “He said the kid takes initiative of everything he’s doing. He’s a director. He’s not an actor. You don’t have to tell him what to do. There’s a clear difference, he just directs himself. When he’s coached, he doesn’t sit there and just “yeah, yeah”, you. He’s curious. He asks good questions and is a sponge. I just see a kid that wants to really learn and wants to really, really be good. He wants to be special, and he’s got a chance to because pitches for his team. He said that, but that’s not manufactured. That’s a real feeling.”

While the Commodores had a tough time figuring out Michigan starting pitcher Isaiah Page early in the contest, Rocker made sure the Wolverines didn’t get anything rolling from an offensive standpoint.

Rocker struck out five of the first six batters he faced, two of the six on breaking balls, while the others were on 94-96 mph fastballs. The mature Vandy freshman ran into back-to-back tough innings in the third and fourth frames, respectively. But again, he battled through adversity. Rocker got a ground out and a strikeout on a nasty 83 mph slider to end the third before recording the first two outs in the fourth, followed by Michigan putting runners on second and third yet again in the fourth. But Rocker got out of it with a strikeout. In the sixth, Rocker’s final frame, Michigan got two runners on base with nobody out. However, Rocker put an exclamation point on the victory by striking out UM’s CWS hero, Jimmy Kerr, on a 91 mph heater before inducing a pair of fly outs to end the inning.

“Yeah, it’s pretty incredible,” Vanderbilt catcher Philip Clarke said about Kumar’s performance. “But I would say the main thing is it’s comforting as a team to have a freshman that can do what he does on a daily basis, and on a weekly basis. It gives us the energy we need, especially on a day like this.

“He’s emotional when he needs to be, and other times he’s not,” he continued. “I think that is just shows how strong his mind is, and especially for a freshman, how mature he is. Sometimes I try to get him going, and sometimes he’s already there.”

In the most important start of his young career, Rocker finished the night striking out 11, walking two and allowing just a run and three hits in 6.1 innings. It was simply put … masterful.

Even more impressive are Rocker’s overall numbers in this postseason. They’re what we call ‘video-game numbers’. In four postseason starts, Rocker has now allowed just three runs and 15 hits in 28 innings, while making a bold statement with 44 strikeouts and just five, yes, five, walks, along with an outstanding 0.96 ERA.

“Well, I think it was just a very protective moment,” Corbin said. “We had the right guy on the mound. I was asked a lot of questions about him prior to today, and the thing that I knew is that he would go out and compete. There’s no doubt in my mind.

“I haven’t been around him that long, but I know the fibers of the kid,” he continued. “I know how he’s directed. I know how he thinks. I know how he attacks and I felt like we had a chance today with him on the mound as I do with all of them.”

Vanderbilt still has another game to win to captured its second national title, but the legend of Kumar Rocker is only beginning, and we get the pleasure of watching the righthander do his craft for the next two seasons.

Corbin and the Commodores needed their ‘director’ to go out and put together the performance of his life to keep their national title hopes alive.

He didn’t just direct a good performance. He delivered a masterpiece.

In other words, it was just Kumar being Kumar.

We’re used to it by now.