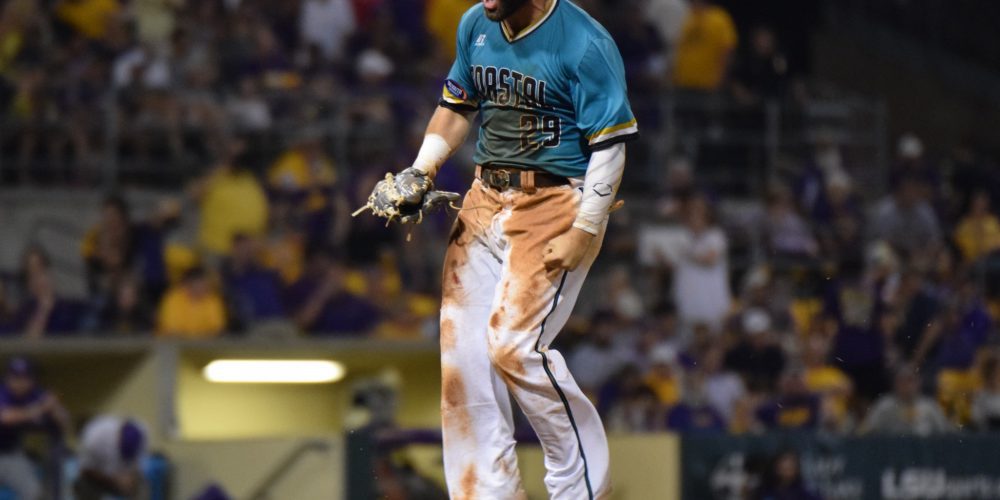 OMAHA — After spending two weeks in Omaha covering the College World Series, you start to feel like you really know some of the players who have stayed for the duration and reached the CWS Finals. By now everybody is familiar with the dugout antics of Arizona and Coastal Carolina — the dance parties and hair-grooming on the Arizona side, the shark and the monkey on the Coastal side. And that stuff’s fun, but I’ll remember these two teams more for the personalities of individual players both on and off the field.

At the end of every season, I like to recognize the players I have most enjoyed watching and talking with over the course of the season by rolling out my annual All-Fitt team. It’s common for CWS Finalists to occupy several spots on the team, and this year is no different — Coastal has four representatives and Arizona has two. As a short guy, I always gravitate toward short players, and there are a number of undersized guys on this year’s team, although that is not a requirement. But Coastal Carolina’s Anthony Marks, a 5-foot-8 firebrand, embodies the All-Fitt spirit.

Marks has modest physical tools and went undrafted as a senior this year, but he is the consummate spark plug, firing up his team in the dugout and on the field. He sprints around the diamond with incredible energy and emotion, and it’s fun to watch. He had three hits in Coastal’s bracket-deciding win against TCU, and his afterward his teammates described how much he means to the team.

“He’s our table setter, he hit leadoff for the majority of the year, and he’s just a really emotional guy,” righthander Alex Cunningham said. “When everyone else doesn’t bring the emotion, he’s the guy that brings it, and guys definitely feed off that.”

Added G.K. Young, “He motivates this team to no end. We would not be who we are without him.”

And it’s not a show. Marks is the genuine article, and he always manages to channel his emotion toward his own team, never showing up the other team.

“That’s just the role I’ve always had in my life, being the little guy, that’s just how it’s always been,” Marks said. “In high school, I wrestled a little bit, so I have a little different mindset than everybody else. I can get a little crazy at times, I’ve got to pull it back. But I enjoy what I do. I know they feed off me, but I feed off them too. If I’m struggling or something, but if they’re out there swinging it or throwing strikes or making top 10 plays, I’m getting fired up for them no matter what’s going on, because I love everyone in there, and they enjoy playing the game, and I love it.”

Without further ado, here’s a full look at this year’s All-Fitt team. And since this marks the 10-year anniversary of the first All-Fitt team, I decided it would also be fun to create a 10-Year Anniversary Team — a 35-man roster featuring my favorite players to cover over the last decade (not including this year).

A natural leader who plays the game hard and always offers insight after the game.

The Big 12 player of the year is a 5-foot-9 first baseman with big power and superb defensive skills — an inspiration to short guys everywhere.

Another vertically challenged dynamo, the 5-foot-8 Ramer impressed me with his smooth defense and his table-setting skills every time I saw him in February, April and June.

I love how Josh Holliday summed up Walton last week: “That little rascal at shortstop, wears No. 5, he’s the catalyst of our identity.” I have admired Walton’s all-around game for four years, and he’s the epitome of class.

Like Ramer, Gibbons is a 5-foot-8 senior who has become a bona fide star, winning the Pac-12 batting title and flirting with .500 in Omaha. Like Ramer, he quietly goes about his business in admirable fashion.

The most electric player in the country and the most fun to watch, with premium speed and lightning-quick hands. And his charisma and thoughtfulness off the field was just as impressive

A 6-foot speedster with incredible hand-eye coordination, Mangum rivals Ray on the list of most electric players I saw in 2016.

He’s 5-foot-8 and might be the most high-energy player I’ve ever seen. He’s just a bundle of emotion, and he harnesses it in a positive way to motivate his teammates.

There’s a reason Brigman is a long-time USA Baseball favorite — he’s got special makeup, and he’s got advanced baseball instincts to match.

I’ve been driving the Craig bandwagon since last year, and now the whole country knows just how great of a player this guy is. The D1Baseball Player of the Year is a gifted hitter who also owns a 95 mph fastball, and he’s a refreshingly honest and entertaining quote.

College baseball’s premier slot-shifter is just a lot of fun to watch — not many guys have ever done it the way he has, varying his arm angle from one pitch to the next. He is the closest thing to a Wiffle ball ace I’ve ever seen.

It was a treat to watch Dunn dominate against Tulane at the Oxford Regional. Tulane coach David Pierce compared him to Doc Gooden, and that day, the comparison fit. Seems like a really nice guy, too, and plenty charismatic.

Just a reminder: you don’t HAVE to be short to make this team. The 6-foot-9 Howard doesn’t fit the typical all-Fitt mold physically, but he might have been the best quote I came across all year long — really enjoyed chatting with him after he and roommate Ryan Burnett shined last week.

It felt like I was watching this talented sophomore take the leap to stardom right before my eyes back in Week Two in San Diego. His stuff was electric, and I also enjoyed his energy — I wrote that he “stalks around the mound like a ticked-off lion,” and compared his expressiveness to another Fitt favorite, Carson Fulmer.

I just couldn’t choose between these two guys, so I’m cheating and making them share the RP spot. They are both fearless warriors on the mound, and I really enjoy their friendly, fun-loving personalities off the field, too.

A 35-man roster composed of the players I have most enjoyed covering over the last 10 years, not including 2016: