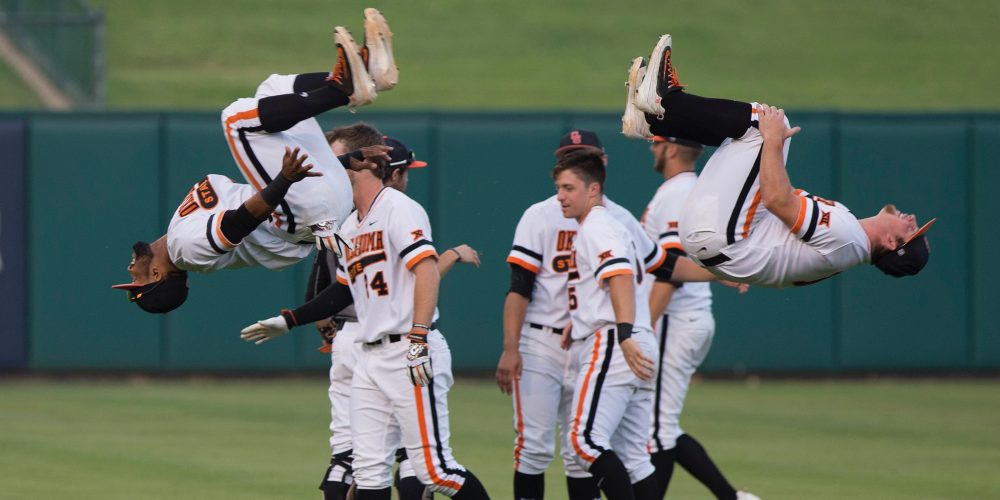 As we get ready to put a bow on another college baseball season tonight or tomorrow, it’s time to step back and recognize some of the players who have made 2017 fun. I remain as grateful as ever that I have the privilege of covering college baseball for a living, so at the end of every season, I select an All-Fitt team, composed of the players I most enjoyed covering over the course of the season. Some of them made the list because of their personalities, some for their style of play, and some for both of those things. But it’s important to note that this list is entirely subjective and unrelated to statistical performance.

Without further ado, the 2017 All-Fitt team:

His coaches and teammates call him “Tank,” because he’s built like one at 5-foot-9, 221 pounds — yet he’s a freakishly athletic former gymnast who has been known to do standing backflips before games. He also has an endearing personality and good sense of humor, which made him the media darling of the Big 12 tournament.

By all accounts Rooker is a first-class guy with a great personality, and he put on an incredible show this season. I was there for the opening act of that show, when Rooker had a walk-off laser in the first weekend of the season against Western Illinois. Nice way to set the tone for the season.

The All-Fitt prototype — a dynamic little guy, like a modern-day Tony Kemp. Being short isn’t a requirement for this team, but it surely helps, and the 5-foot-8 Madrigal gets bonus points for standing eye-to-eye with me while also being one of the most exciting players in college baseball. He has game-changing speed, incredible bat-handling skills and uncanny instincts — he’s just a treat to watch every single time he takes the field.

I saw Ellis put on a show at the Louisville Super Regional, cranking a couple of big home runs and igniting the home crowd with his emotion. I like guys who play with that kind of passion. I also like personable kids who can serve up a good quote in the postgame, and Ellis sure checks that box.

Living in Durham, I’ve gotten to see plenty of Warmoth over the last three years, and I walked away with a strong appreciation for his all-around baseball skills, his hard-nosed style of play and his presence. He worked hard and turned himself into the top college shortstop in the 2017 draft.

HONORABLE MENTION: Tough to leave off 5-foot-8 dynamo Devin Hairston of Louisville, and the exceedingly quotable Matt McLaughlin of Kansas. Fun to watch those guys, too.

One of the most exciting players in the country, Fairchild has done something dazzling almost every time I’ve seen him over the last three years. He’s a true five-tool talent with game-changing power, speed and defensive ability.

LSU coach Paul Mainieri referred to Madrigal and Kwan as a couple of “pests,” and he meant it as a compliment. The 5-foot-8 Kwan has top-of-the-charts speed and knows how to use it; he has incredible range in center field and is a high-energy spark plug with outstanding bat control atop the lineup. My kind of player.

I’ve liked Oliva’s game since watching him a bunch in the 2016 postseason — he’s another outstanding runner, albeit in a taller, rangier frame than the other outfielders on this list. But he really impressed me with his magnetic personality; he was clearly a major glue guy in that Arizona clubhouse.

HONORABLE MENTION: Austen Wade, TCU. The Horned Frogs were loaded with thoughtful, insightful players who impressed up on the postgame dais, and Wade was near the top of the list, along with Evan Skoug and Brian Howard. I also like Wade’s pretty swing and athleticism — good player who seemed to fly under the radar just a bit over the last three years on this TCU team, but he was a big part of their success.

The fifth-year senior hit a pair of homers in the first game of the Chapel Hill Regional to help FGCU win its first-ever NCAA tournament game, and he was exceedingly likable in the postgame press conference. Here’s a guy who really appreciated the moment, and his enthusiasm was contagious.

HONORABLE MENTION: Keston Hiura, UC Irvine. I’m not giving him the spot because I didn’t get a chance to speak with him when I saw the Anteaters this year, but by all accounts he has a great personality to go along with his preternatural hitting ability. What a joy to watch this dude swing the bat.

Obviously McKay is one of the best players of his era, and it has been fun to cover him for three years — I was there for his first college weekend in Clearwater in 2015, and I was there for his final game in Omaha. He’s still a quiet guy, but he has gotten better at dealing with the media, providing some really thoughtful answers over the last couple of weeks. I still love the fact that earlier this year, he said his favorite moment of his college career was a seven-hour bus ride to Georgia Tech, because it gave him the chance to bond with his teammates. That’s Brendan McKay — just a simple, down-to-earth guy who also happens to be one of the most productive two-way players ever.

Faedo is one of the better quotes on a Florida team that doesn’t have a lot of huge personalities — they just go about their business. It sure was a pleasure to watch Faedo dominate on the big stage in Omaha, posting a pair of 11-strikeout games against TCU in the last week. It’s fun when elite talents perform like elite talents when it matters most.

Howard is the only repeat member of the All-Fitt team — even though he’s 6-foot-9 and not one of those little rug rats I typically gravitate toward. He just has a wonderful fun-loving personality and a quick wit that makes him instantly likable. I also got to see him throw a couple of gems this year, in the Big 12 tournament and the CWS. Big-Game Howie, indeed.

Lange will go down as one of the great pitchers in LSU history after his three years of strong production. He’s a true warrior who never gives in when he’s on the mound, and his hammer breaking ball can often help him escape trouble. But he’s on this team because he’s a great quote and he seems like a funny, personable dude off the field (as evidenced by his great back-and-forth on Twitter this week with closer Zack Hess).

He doesn’t blow anybody away with electric stuff, but he really knows how to carve up opposing hitters, and his presence on and off the field is special. Another fantastic quote and a natural-born leader.

Really enjoyed talking baseball with Schmidt, who has a wonderfully analytical mind and a charismatic personality. Fun to watch him pitch too — he’s a fierce competitor with very good stuff.

I saw him come up big a couple times this year, at South Carolina midway through the season and at Clemson in the regional final. He’s an insightful guy with a big heart, which I witnessed as he tearfully embraced Donny Everett’s parents at Everett’s number retirement ceremony.

A holdover from the 2016 CWS champions, Schaefer is outgoing and friendly, and he’s a baseball rat who drove up from Conway to watch some of his friends on the Michigan team compete in the Chapel Hill Regional. I appreciated that he flagged me down on the concourse that day, and I enjoyed talking baseball with him for a few innings. Feels like Schaefer could be a future coach if he wants to be, or maybe a successful businessman.