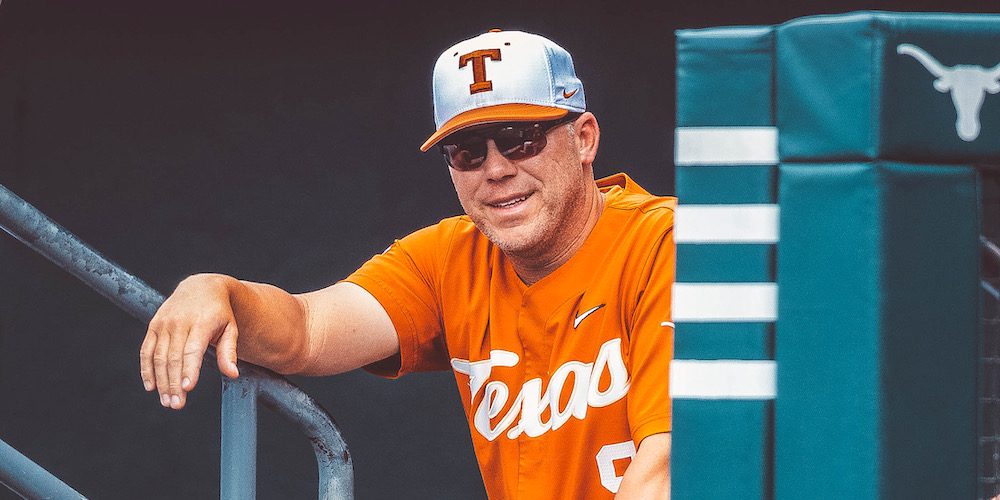 Texas assistant and pitching coach Sean Allen is truly a jack of all trades.

“I think the first thing that stands out about Sean is that he has such a high baseball IQ,” Texas head coach David Pierce said. “He understands both sides of the ball really well and I think it was really easy for him to move from a player to a coach. He’s always been an excellent listener. He’s very inquisitive, and then he goes and does plenty of his own research. He has convinced himself of what he truly believes in over the years as a player, and now as a coach.

“For me, he’s truly a diamond in the rough,” he added. “He can excel at anything.”

Excelling in everything he does has been part of Sean Allen’s DNA since his playing days at the University of Houston. He still holds the school record for assists in a four-year career with 542, and immediately made an impact from a coaching standpoint after graduating and becoming a student assistant for the Cougars. He stayed with the Cougars through the 2007 campaign.

From there, Allen went to Florida International from 2008-2011 before hitching a ride on the David Pierce express at Sam Houston State. Allen was with Pierce for three seasons in Huntsville, and helped the program not only win three-straight SLC championships, but also make three-straight NCAA tournament appearances.

The baseball marriage between Allen and Pierce didn’t end there.

Allen’s tenure at UT has been unique in some ways.

He arrived in Austin as the program’s hitting coach. And while he did that through the 2019 campaign, Pierce had an idea to go in a totally different direction with not only Allen, but with other coaches within the program after that season. Allen was moved from hitting coach to pitching coach and the Longhorns hired big leaguer Troy Tulowitzki as their hitting coach.

After the way the 2019 season transpired, it was a risky move on all fronts for Pierce … to say the least. But it was one he felt fully confident in because of the versatility of a guy like Sean Allen. Allen proved he could coach hitting, pitching — all while being the backbone of the program from a recruiting standpoint.

“Those were two pressure movements for me … after 2019,” Pierce said. “In 2019, we weren’t good overall, and if we bring in Tulo and that’s a bust .. and then we move Sean to pitching coach and that’s a bust … that’s probably not a good ending for me. But both of those guys worked tremendously together, and they all validated what I thought would be the case … I knew they could both do it. I knew Sean could do it.”

The list of assistant coaches who have excelled at the highest level as both hitting and pitching coaches isn’t long. As a matter of fact, through all of my research and discussions with coaches across the country, we were only able to come up with a few prominent names.

One of those names? David Pierce.

Pierce was long considered one of the top assistants in college baseball during his time at Rice. The now Longhorns skipper spent nine seasons with the Owls under legendary head coach Wayne Graham. And while he dealt with the hitters his first three seasons, Graham gave him an opportunity to have a different perspective — he wanted him to handle the pitchers, and so he did in his final six seasons on South Main.

One might think it would be a difficult transition to make. Pierce felt otherwise.

“On doing pitching or hitting — I honestly thought it was an easy transition,” Pierce said. “You’re able to look at pitching from a perspective of how do I attack a hitter. You know a little bit more about the ins and outs of hitting, the approaches and things like that. You then can relay those things to pitchers.

“And so, it gives you an overall perspective on things,” he added. “I was really blessed when Coach Graham moved me from hitters to pitchers. It allowed me to be very flexible with guys who had some flexibility. Frankly, it’s something that has helped me go as a head coach. It’s a great perspective from both angles.”

Allen is now part of that distinguished list. He had the Longhorns off to a solid start on the mound in 2020 before the season was shut down. And that successful trend continued at an elevated level this past spring.

The Longhorns had one of the nation’s premier pitchers and prospects in righthander Ty Madden. He had an All-American campaign and gave the ‘Horns are a dominant weapon on Friday nights. Tristan Stevens, who recently announced he’s returning for the 2022 campaign, had a strong 2021 campaign, and lefthander Pete Hansen, who had a slow start because of COVID, finished the season in stellar fashion. He, too, is back for the 2022 season.

Overall, the Longhorns’ pitching staff put together video game numbers. They finished the season with a national best 2.94 staff earned-run average. The next team behind the Longhorns overall? Fairfield at 3.14. And in the Big 12? The second-best team ERA was Baylor at 36 nationally with a 3.96 ERA.

Stellar pitching and defense, along with timely hitting is what ultimately propelled the Longhorns to another deep College World Series run, and what has them primed to win a seventh national title in ’22.

“I knew he was smart enough to do it and I knew he’d be very good at it,” Pierce said about Allen’s transition. “I really think his demeanor, specifically from a pitching side of things, is a big bonus for him. He has great balance. When I get excited, he has a calmness about him with pitchers and catchers. It’s not easy for everyone, but Sean has made it look pretty easy.

“He just did a heck of a job. I’m just one of those people who will get involved if I must get involved. But honestly, with Sean and this staff, I rarely had to. I think he can excel at both things.”

And Pierce’s preference on Allen’s strengths as a hitting or pitching coach?

“I thought he was a very good third base coach, I thought he handled the infield well. He’s a great bench coach for me,” he said. “He will see some things that I don’t always see. At the end of the day, I do like him more as a pitching coach. But most importantly, I think he’s going to be a great head coach someday.”

Sean Allen is ready for the next big step in his coaching career: A strong head coaching job.

Allen, 42, has had some opportunities over the years. He was a finalist for the Rice head coaching job when Matt Bragga was hired as the head coach for the Owls. He was once again a finalist for the Rice head job this past summer, but influential donors around Rice preferred one of their own — Jose Cruz Jr. — over the ultra-talented Allen. And in the middle of those two openings, Allen was in the mix for the Sam Houston State head coaching job. However, the Bearkats ultimately decided to promote associate head coach Jay Sirianni to head coach.

It hasn’t been easy at times for Allen to practice patience when it comes to head coaching jobs. But as the Tom Petty song goes, ‘Waiting is the hardest part’.

“I went through it, and he’s kind of going through it now. We won a lot of games at Rice and I felt like it was my time,” Pierce said. “But the right job or situation didn’t come up until Sam Houston State. And from there, it was just kind of a domino effect for me.

“It’s just a timing deal,” he added. “My advice to Sean has been not to force it. Don’t take a job just because you want to be a head coach. My first head coaching job was when I was 49 years old. He’s 42. There’s a bright future ahead in that department for him … it’s going to be the right school at the right time.”

In the meantime, the Longhorns will continue to reap the benefits of having an assistant who’s exceptionally skilled in a variety of ways.

Sean Allen is a step above the rest.