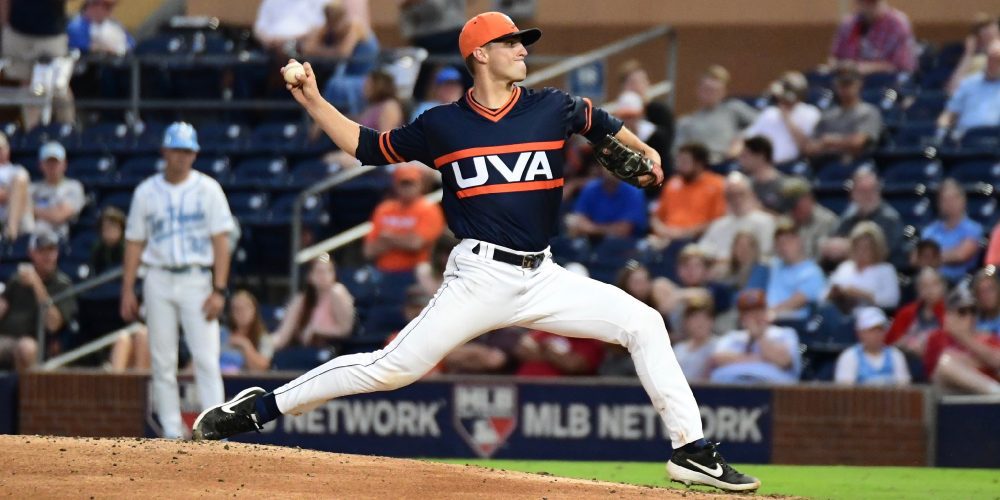 Editor’s note: Virginia fifth-year senior righthander Chesdin Harrington submitted this essay on the shockingly abrupt end to the 2020 college season, from the perspective of a player who was right in the thick of a promising season.

It’s truly challenging to put into words the disappointment that I and so many college baseball players and personnel are feeling over the last week. One minute the Virginia baseball program was kicking off conference play against NC State at home, followed by finishing up a 15-game home stand with a midweek duel against UMass-Lowell on “Field Trip Day” with an atmosphere at Disharoon Park consisting of thousands of screaming kids without a care in the world. But quickly, within 24 hours, we received the news that our season was over as we knew it: “The College World Series has been cancelled,” popped up on my Twitter timeline courtesy of Kendall Rogers. Reality set in… Our season was over.

As a young kid growing up, the University of Virginia was the place I adored the most. My grandfather taught Chemistry at the school for a number of years, and my mother grew up right off Grounds (meaning campus in UVA lingo). I grew up going to football and basketball games at both Scott Stadium and John Paul Jones Arena, wearing the orange wig and Cavalier apparel everywhere I went. I was the biggest ’Hoos fan in the country.

Fast forward several years, and I was beginning to look at college options through showcase baseball. The Virginia Cardinals, based out of Midlothian, Va., and coached by Rich Graham and Brad Marrs, put me in every situation to be successful and pursue college baseball. There were mid-major schools in Virginia and surrounding states that showed interest in my mid-80s, pound-the-strike-zone stuff, but I wanted the bright lights. After several months of training and development that saw my fastball climb into the low 90s paired with great command and offspeed repertoire, it was starting to come together. Finally, in May 2014, I was fortunate to receive an offer from the UVA baseball program, and I took it. It was a dream to attend UVA, and I was going to live it.

When I came to the University of Virginia in July 2015, off the heels of the program’s first national championship, the incoming class had big shoes to fill. We began occupying the lockers and numbers of players like Nathan Kirby, Kenny Towns, Brandon Waddell, and Josh Sborz. I expected to play three or four years before moving on to play professionally and leave my Virginia career in the past. But, as I would soon realize, that wasn’t going to be the narrative of my career in Charlottesville. My script would be upended by lack of success early in my career, posting a disappointing 9.00 ERA in just 11 innings as a freshman. That was followed by injuries, like an elbow issue that required PRP shots as a junior. I found my place off the field in organizations on Grounds, such as Student-Athlete Advisory Committee (SAAC) that gave me a voice for the equities of my team and other student-athletes. And I even got the opportunity to play my fifth year in the 2020 season and obtain a master’s degree, an opportunity that I wasn’t expecting until a late-season surge in 2019. With that being said, the ups and downs of my career would contribute to what made these the most important years of my life for development, happiness, and exploration. I had a full college experience, and everything in the additional year was simply a bonus.

As our team boarded the bus to Pittsburgh on the morning of Thursday, March 12 for our second ACC weekend, all that had been released on the coronavirus outbreak from a sports perspective was particular conference basketball tournaments disallowing fans at the games, followed by the NCAA tournament doing the same. But, as the day progressed towards noon, you could identify the trend that was developing. We’d stopped for lunch in Hagerstown, Md., and as I sat in a Starbucks refreshing Twitter, it seemed like every 30 seconds a new suspension or cancellation was on the way. Conference basketball tournaments were pulling teams off the court to cancel the tournaments, awarding automatic bids to regular season champions. Duke pulled out of the NCAA tournament, Kansas followed. Some conferences and member institutions were suspending spring sports for 2+ weeks, others weren’t (yet).

Our report time back to the bus was pushed back 45 minutes, followed by another 30 minutes. We all knew it was because our weekend plans for a series of baseball were in the balance, but little did we know that Coach O’Connor was also trying to ease his mind, by way of a mall massage chair. The news came of the temporary suspension of our season, and we turned around and headed back to Charlottesville. Although we all knew what was likely to follow, everybody refused to believe it.

It was always my dream to come to UVA, and for many reasons, it continued to be that dream you always want to live and experience in real life. But, in an instant, that dream I was living in quickly turned to a daunting nightmare. “NCAA cancels remaining winter and spring sports championships.” First came shock, then came sadness, followed by devastation. A 14-4 promising start for our program quickly fluttered away, gone in an instant. As we unpacked the bus and gathered in the locker room for a meeting, our team was overcome with emotions. Coach O’Connor addressed the group eloquently, even without knowing any real answers. Brian O’Connor is a leader in every sense of the word, and although I was shattered, he provided comfort. A nearly impossible task at the time.

After the meeting, guys were hugging each other and wiping away tears, saying their goodbyes. My first-year roommate Evan Sperling and I made our individual rounds of the ballpark, taking in every bit of the park we had developed so many memories in. “It just seems like every place I step brings out memories,” Evan said. As I made my way into the former home bullpen, which now serves as a storage space for field mats and grass protectors and has stadium seating above it, I stood on what was left of the old pitching mounds and cried. This was where I grew up. I spent much of my time getting chewed out by Karl Kuhn in that bullpen, and although I didn’t enjoy it much at the time, damn I missed those times now.

We were all experiencing the feelings that come when you finish up your season in late May or sometime in June each year… but it was March 12. The following day after a team driving range outing and meal, my teammate Paul Kosanovich said, “Man, I just hate saying bye to my teammates in March.” At that time it had finally hit me that this was it, and that this would be the last time, for the foreseeable future, I would see many of these guys as they retreated home for quarantine.

I can assume the feelings are the same among other student-athletes and teams across the country in numerous sports, but this was from my perspective. An 18-year old arrived at UVA never expecting his time to come to an end, and almost five years later a 23-year-old had his last ride in the orange and blue cut short unexpectedly. With the NCAA reinstating eligibility for seniors, this may prove to not be the end for many of those who believed the 2020 season would be their last season for their respective schools, as I did in 2019. But for now, it’s the end for many, and I’m heartbroken for everyone involved.

With all of this being said, this situation is bigger than me, my teammates and coaches, college baseball, and sports generally. In the midst of the pain of our season and college careers ending, it’s important to recognize what is really important right now on a global scale: the health and wellbeing of human beings. Although it took some time, I recognize the severity of the situation at hand. People are losing jobs. Lives are being lost. There are bigger issues at play than just my sorrow. But, that doesn’t make it any less difficult to digest, and I know how important this season and careers mean to student-athletes. So, as you show your support and care for the many affected by this pandemic, please do the same for those you know in college sports that had their season end so abruptly. They need it.

As many college baseball players close this chapter of their lives and turn to writing their next in the working world or professional baseball, it will be a difficult and sudden transition leaving the stone of this season unturned. For those returning for another year, approach every day with gratitude and joy, never take anything for granted, and always think about Kevin McMullan’s wise words of replacing “I have to” with “I get to.” I want to close by saying something that has been shared with me over the years that I think encapsulates all that I’m feeling right now, with gratitude and reflection:

Always remember and never forget: “The Joy is in the Journey.”