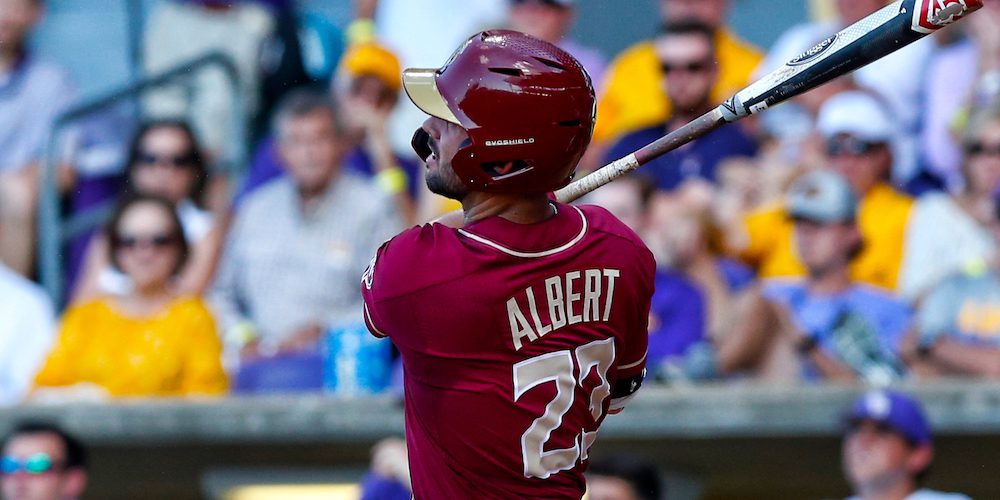 BATON ROUGE, La. — For at least a day, the magic surrounding ‘11’ outdid the mystique that is Alex Box Stadium.

For five innings Saturday afternoon, it looked like Florida State would be denied a 40th win and LSU was on the way to a 1-0 series lead in the Baton Rouge Super Regional. In addition to LSU getting Florida State lefthander Drew Parrish out of the game in the early innings, the Tigers had a no-hitter after five frames.

On this stage, in this stadium and at this moment, surely LSU was about to take a series lead over the Seminoles. Right? No. Wrong. Florida State scored a run in the sixth inning and tied up the game in the seventh on a three-run home run by Reese Albert. FSU scored the go-ahead run in the eighth on a Tim Becker sacrifice fly — one of his many big hits in this postseason, while Albert put an exclamation point on a huge victory with a solo home run in the ninth to make it 6-4.

This game, in the middle innings, seemed improbable, much like FSU’s postseason run thus far. But as the Seminoles did last week, they were patient at the plate, didn’t deviate from the plan and found ways to win in the latter innings.

It just reinforces the feeling that FSU could be a team of destiny.

“That was a heck of a ballgame. Everyone, myself included, were wondering how it was going to turn out for both teams,” Florida State coach Mike Martin said. “It was a pure display of poise and I am very pleased with our team and the way we played. We certainly know [this game] doesn’t decide anything and we know how difficult it is to win two of three.

“This team … I know it sounds really corny, I don’t really care, but we care about each other, Martin said. “We want to play solid baseball, and people are entitled to say what they want to say. But we play for each other and they’ve shown heart. They’ve shown they’ll battle no matter what.”

Battle might be the best word used to describe Florida State’s performance against the Tigers on Saturday.

While the Seminoles used offensive surges to storm past Georgia last weekend, it didn’t seem to come so easy and naturally in the first few innings of this game.