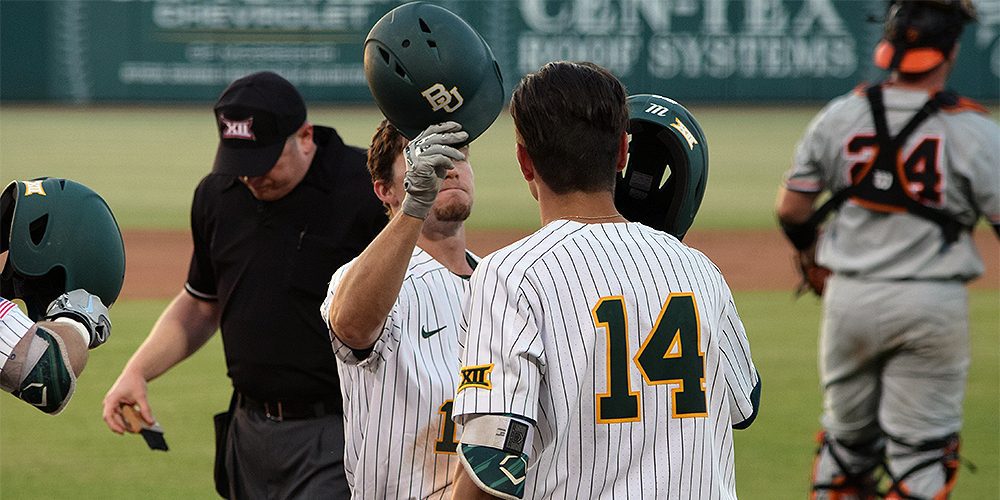 WACO, Texas — Good things tend to happen when your confidence is out of control.

That’s precisely the case with the Baylor Bears, as they extended their nation-leading winning streak to 13 games Friday night with a 13-5 thrashing of Big 12 leader Oklahoma State.

Baylor sophomore lefthander Cody Bradford set the tone early in the contest, while the top half of the Bears lineup did some serious damage in the win. The top four hitters in the lineup combined for 12 of the team’s 17 hits, while Richard Cunningham and Cole Haring each hit a home run.

The Bears were focused and ready right out of the chute Friday night. Before Friday, that was somewhat of a concern for BU skipper Steve Rodriguez, especially after BU didn’t play last weekend as a lead up to finals. The Bears did play a two-game midweek set against Prairie View A&M earlier this week, but the Cowboys are a stark contrast from the Panthers.

Baylor was red-hot before the break, and that trend continued, much to Rodriguez’s pleasing.

“Anytime you come off finals, you’re always worried. We got the rust off against Prairie View A&M, and we were able to square some balls up in the middle of the field. I feel like I’m bumper bowling right now,” Rodriguez said about his role as coach during the winning streak. “That’s the easiest way to put it. They are going down the line and I’m just trying to keep them on it. Like bumper bowling and letting the ball do the work, I’m letting these guys do the work. We’re just letting the athletes play.

“We’ll make sure our guys are prepared and know what they have to do,” he continued. “But this is the time of the season when the athletes take over.”