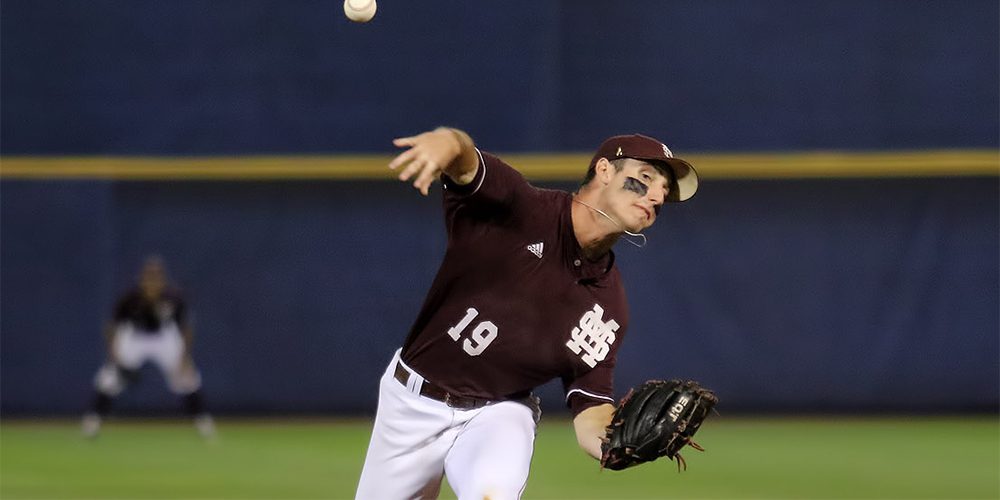 HOOVER, Ala. — Mississippi State first baseman Brent Rooker can do it all. Well, sort of.

We all know the hard-hitting Bulldogs veteran for his old school approach and home runs that almost seem to go into orbit. But Rooker, the pitcher?

After the Bulldogs used a plethora of pitchers in the first game of the day against Florida, State head coach Andy Cannizaro was short on options. So, he joked with Rooker about letting him pitch in the nightcap against Arkansas should the situation present itself. Never mind the fact that Rooker hadn’t touched the pitcher’s mound since his senior season at Evangelical Christian School in Germantown, Tenn.

Amazingly, the situation indeed presented itself. The Bulldogs had used four pitchers entering the 8th inning, and after playing earlier in the day, they essentially were out of reliable arms. So, as MSU was hitting in the top half of the eighth, Rooker trotted to the bullpen to warm up. He took his position at first base to start the bottom half of the inning before coming into pitch with a runner on first and two outs.

“That was fun. Obviously, with as many arm injuries as we’ve sustained, four games in three days is doing to do a number on our bullpen, especially against this kind of quality competition,” Rooker said. “We ran thin down there and he asked me to go in there and throw it somewhere near the plate.

With the Razorbacks in total control of the contest with a 7-2 lead in the eighth, Cannizaro created a buzz throughout the Hoover Met when he walked out to make a pitching change and pointed to Rooker to come to the mound. Arkansas coach Dave Van Horn admitted after the game he thought they initially were kidding around, or someone had lost a bet.

As you might expect, Rooker’s warmup pitches looked like someone who hadn’t pitched since high school. A couple of the pitches went to the backstop and Rooker was just trying to find some sort of formula and groove to get through the inning.

Rooker’s first pitch was a 74 mph curveball. He then threw another pitch at 76 before walking Carson Shaddy on four pitches. The next at bat against red-hot Arkansas shortstop Jax Biggers, Rooker allowed a two-RBI double down the left-field line to make it 9-2 in the Hogs’ favor. The MSU slugger, err, utility player, got out of the inning on a hard-hit Grant Koch fly ball to right field.

Brent Rooker made a little history on Friday. (Kendall Rogers)

Van Horn said after the game he kind of expected Rooker to take the mound and throw somewhere around 90 mph with the fastball. But nope, he wasn’t close to that. Rooker sat 74-76 with that curve, while also sitting 80-82 and up to 83 mph with what he called a cutter. Let’s give him about a 30-35 on the scouting scale for command, too.

“I hadn’t pitched significantly since my junior year in high school, and I think I pitched sparingly as a senior,” he joked. “I was probably not better than 82 back then, either. Those pitches were cutters. I was just trying to throw it close to the plate and get some swings. It was a cool experience to do that, and that kind of concludes a fun SEC year for me.”

The positive end to the evening should give Rooker and the Bulldogs a better feeling on the heels of next week’s NCAA postseason. Rooker had a tough day at the plate, going a combined 0-for-9 with three strikeouts against the Gators and Hogs.

However, Rooker’s presence on the mound might just change our vote for the National Player of the Year race after he showed the ability to hit and pitch like Louisville’s Brendan McKay. We’re kidding about the pitching part, by the way.

“That was the goal, to get on the same level as that guy,” Rooker said about McKay. “From what I hear, though, I need to work on my curveball a little bit.”

That’s OK, McKay probably would like a little bit of Rooker’s raw power, too.

One thing Rooker doesn’t need to work on is his ability to carry the Bulldogs at the plate. He’s the best of the best when it comes to that and will need to be in tip-top shape next weekend with the Bulldogs on the road for the regional round.