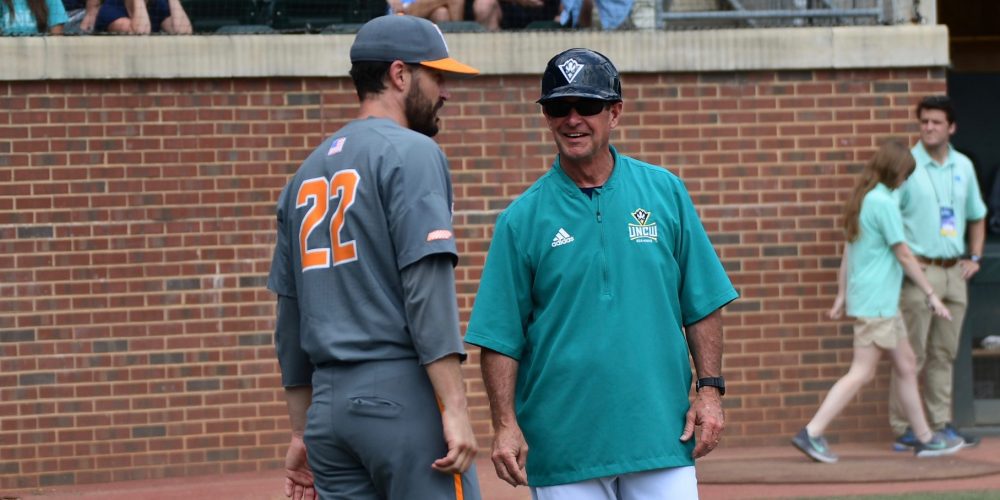 CHAPEL HILL — Mark Scalf held it together for a while. After the final out was recorded in UNC Wilmington’s 10-3 loss to Tennessee, Scalf walked calmly out of the third-base coach’s box, giving star shortstop Greg Jones a reassuring pat as they crossed paths. Then he exchanged handshakes and hugs with the Tennessee coaching staff, and spent several minutes in warm conversation with UT head coach Tony Vitello. Then he walked back past the third-base dugout and toward his players, who were waiting for his final postgame address in left field. As he walked, UNCW fans chanted his name, and he acknowledged them with a wave.

By the time Scalf got back from meeting with his players, his eyes were wet. After spending the last 28 years as the head coach at his alma mater, Scalf is retiring — and the end of his outstanding career was emotional.

“I told ’em I love ’em. Thanked ’em. This group…” Scalf trailed off, wiping away tears. A long moment later, he tried to pick up where he left off. “Sorry. This group’s come a long ways since early in the year. Just thanked those guys for their effort, their work. For the way they continued to compete, as the year went on. even though we were in a difficult situation coming down the stretch, where we had to win games. And those guys kept playing. We did it on the mound, we competed at the plate, defensively we got better. And I just told them thank you, for what they are and who they are.” 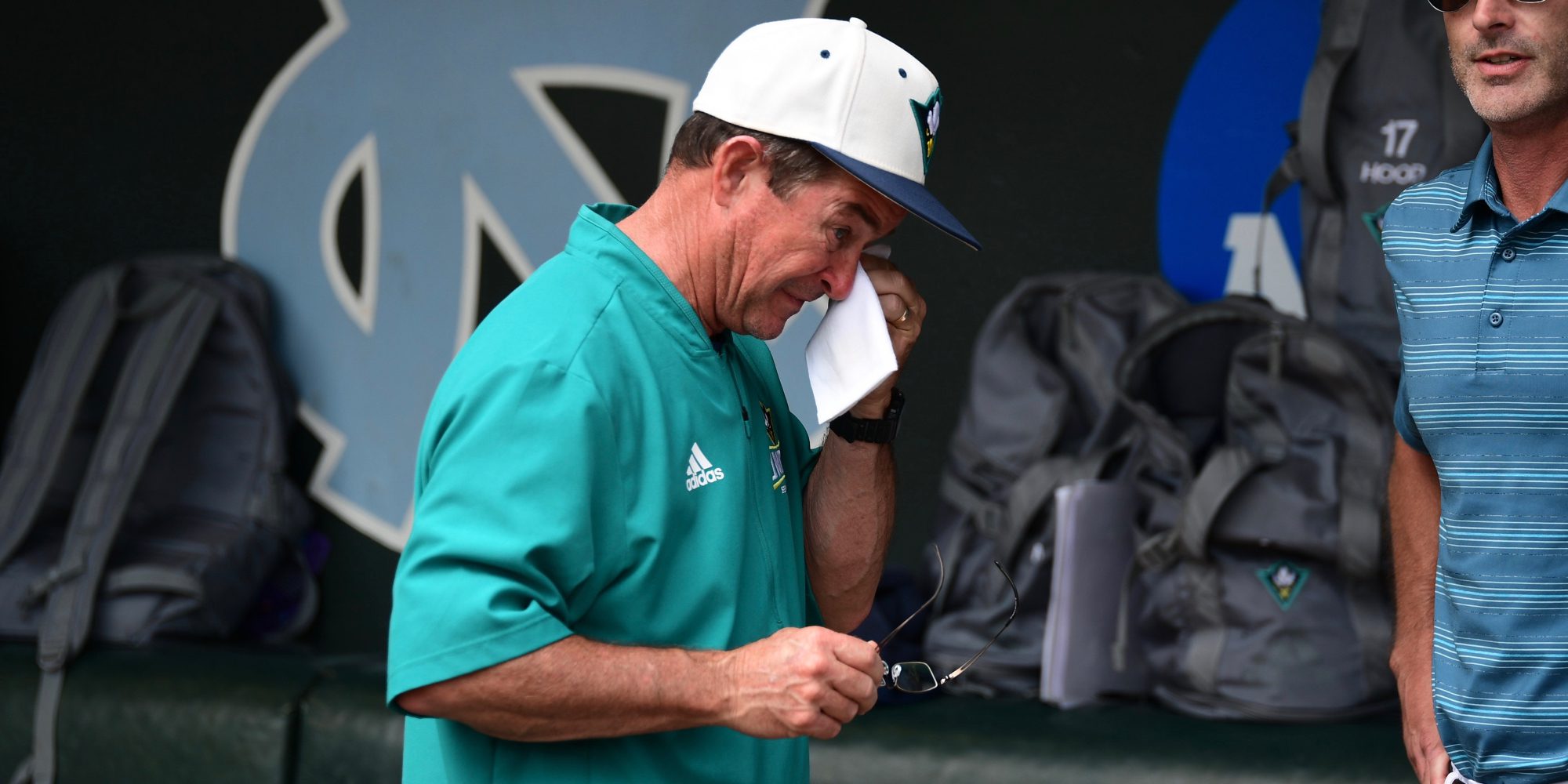 A moment later, Scalf finished his answer with an example of his endearingly dry sense of humor, delivered with perfect Scalfian deadpan. “Fortunately for me, I won’t be far away, and I’ll be able to watch ’em in the stands,” he said. “And when they play well, I’ll stay for nine innings. And when they stink it up, I’ll leave early.”

Scalf is one of the most universally liked and respected college baseball figures I’ve encountered in my 15-year career, not only because he’s a great teacher of the game, but also because he’s just such a darn good guy. I’ve never heard a negative word about him — not from rival coaches, not even from scouts, and scouts are notoriously critical of most college coaches. But Scalf treats everybody the right way, and he always has. He’s not some over-the-top personality, but he’s down to earth and friendly — he’ll spend 45 minutes chewing the fat with you after a fall intrasquad, after most everyone else has lost the ballpark.

Fox said he cut his teeth as an assistant under Don Scalf, Mark’s uncle, at N.C. Wesleyan. Mark was there as a graduate assistant, and then served as an assistant at North Carolina in the early 1980s, before returning to UNC Wilmington as an assistant. So the Chapel Hill Regional was a fitting place for Scalf’s coaching career to end, in a regional that also featured Liberty, coached by former Scalf assistant Scott Jackson, whom Scalf said he loves to death.

“The story of the day is coach Mark Scalf retiring,” Vitello said at the start of his postgame remarks. “Pretty neat to see how emotional he was. Obviously like any team that plays in a game, he would’ve wanted to win, but basically 30 years of bringing up young men. The next-closest to parents are teachers and coaches, and anyone who can put up with these young guys for that long of a time needs to be commended. Anyone who can do it that well needs to be applauded for a long, long time, and put up on a pedestal, like he probably will be for what he did.”

To tie it all together, Vitello said his first-ever game as a volunteer assistant (or, “non-compensated” assistant, as he prefers to call the position) at Missouri came on a road trip to UNC Wilmington. Being from St. Louis, Vitello didn’t know anything about UNC Wilmington.

“And we went out there, and their facilities were great, they were well coached, and it was an absolute war,” Vitello said. “And I told Coach (Scalf), I thought we were going there to kind of warm up for our season, we liked our team. Heck, we had Ian Kinsler on the team. But it was a war. And that was my first impression of him, and my last one, I hold him in just as high a regard.”

It was obvious Saturday just how highly Scalf’s players regard him, too. Jones, the star shortstop and potential first-round pick in this week’s draft, was overcome by emotion when asked to describe Scalf’s influence on him.

“We see Coach Scalf as a role model,” Jones said. “He teaches us what’s right and what’s wrong on and off the field.”

Then Jones choked up, put his head in his hands, and went no further.

“When I think of Coach Scalf, I think of someone like a second father,” said UNCW righty Landen Roupp, Saturday’s starting pitcher. “He’s everything you could ask for and more, on and off the field. He’s one of the best guys I know. And he knows what he’s talking about.”

As always, Scalf opened his own remarks by talking about the game itself, and what went wrong for his Seahawks. And in typical Scalf fashion, he said he was more disappointed for the players than for himself. While building UNCW into an annual contender over the last couple of decades, Scalf got to experience 10 regionals. “I’ve had my chance, I’ve been there,” he said. “We’ve got some young kids who haven’t had the opportunity to be here in this stage, and I just hoped they played well enough last week to give themselves a chance to compete for a championship, and they did that. Coming in here, I was good either way. I was just hoping that we would compete well, which I thought we did (Friday) night and I thought we did for the majority of the time today. We made some mistakes today, but that’s college baseball.”

Scalf leaves the program in great shape, and he leaves it in the capable hands of Randy Hood, his longtime lieutenant. Scalf said he plans to spend more time with his family, and to travel around watching some of his old players in pro ball, and some of his former assistants like Jackson and Georgia Tech pitching coach Jason Howell. He’s looking forward to being able to catch his breath, he said.

But that doesn’t mean he won’t miss coaching, and it certainly didn’t make it any easier to say goodbye to the profession. Scalf got emotional again when asked about the opportunities he’s had to impact a great many lives over the course of his long coaching career.

“In this game, there’s a delayed gratification. I think we all have players that, while they’re in the program, you’ve got a pretty good idea that they appreciate you, they love you. And you’ve got others that, you’re not entirely sure if it’s hitting home, and you try to prepare them for life but you find out 15, 20, 25 years down the road that… phew…” he paused for a long moment to collect himself, wiping away more tears, then continued. “I’ve heard from — I can’t tell you how many. Well over 150 players in the last month. There were probably 100 former players here. And I’ll cherish those relationships for the rest of my life. And I hope they do.”

That was the end of Scalf’s final press conference as a college baseball coach, and it was greeted with a loud, heartfelt round of applause from the assembled media — something I can’t ever recall happening at the end of a postgame press conference I’ve covered. But it felt like an appropriate send-off for a man who embodies so many things that are right about college baseball.