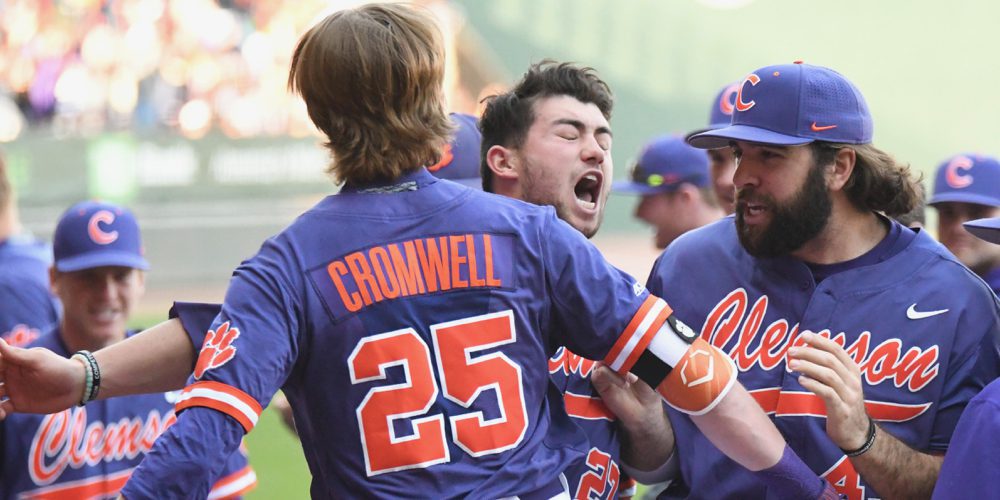 GREENVILLE, S.C. — Clemson-South Carolina is college baseball’s premier rivalry for so many reasons. There’s the excellent tradition of high-level success of both programs. There’s the extraordinary passion and mutual animosity between the fan bases (and, to a degree, between the players). There’s the obvious geographic proximity. There’s the format of the annual traveling series, which features one home game for each team sandwiched around a neutral-site game in Greenville, which provides the unique and exhilarating atmosphere that comes with a packed ballpark divided right down the middle between two rabid fan bases.

And, of course, there’s the on-field drama. This series never fails to deliver compelling theater, and the 7,460 fans packed into Fluor Field on Saturday were treated to a wild, riveting, back-and-forth battle that ended in thrilling fashion. When the dust settled, Clemson had held on for an 8-7 win that evened the series at 1-1 heading into Sunday’s finale in Columbia.

The highlights, and then some observations:

Clemson struck first on a two-run homer by Seth Beer on a 93 mph Wil Crowe fastball in the first. South Carolina tied it in the fourth and surged ahead on Jonah Bride’s two-run homer in the fifth, then added another run in the fifth to take a 5-2 lead. The Gamecocks appeared to be in complete control with Crowe in a serious groove — the big junior righty retired 14 straight Tigers from the second into the sixth. Heading into the seventh, Clemson looked like it was in real trouble.

“What a great game. Just very, very, very pleased with my team to come back the way that we did,” Clemson coach Monte Lee said. “We were down 5-2 going into the seventh inning with nine outs to go, and our guys started to put together some really good at-bats. We started out hot swinging the bat well, and then Crowe being Crowe, one of the best pitchers in the country, changed his game plan a little bit, starting mixing pitches a lot more, and we didn’t make a lot of adjustments off of him from about the third inning on. And then there at the end, we started to figure it out a little bit, put together some good at-bats, and you could see that momentum start to turn in our dugout.”