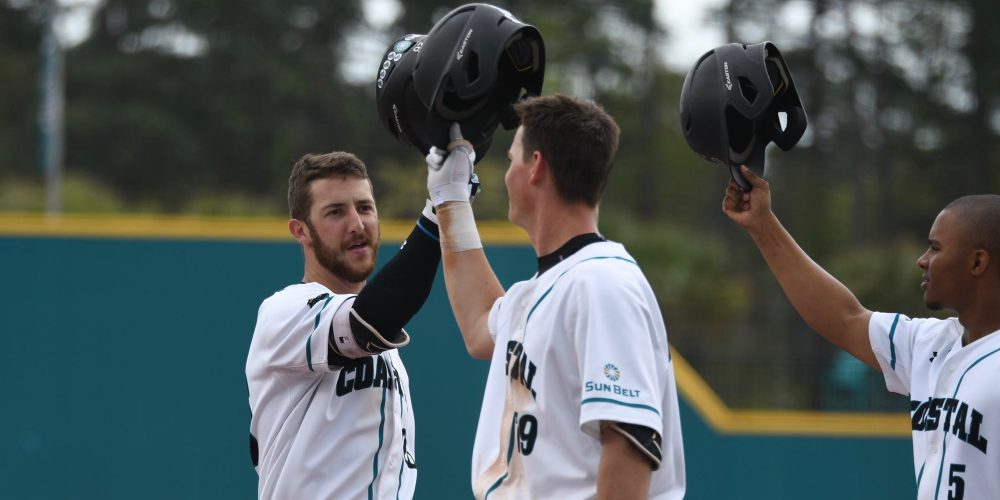 CONWAY, S.C. — Coastal Carolina showed Saturday why it is such a dangerous club, while simultaneously showing why it has a long way to go to return to the ranks of the nation’s elite, a year and a half after its first national title.

The Chanticleers rebounded from Friday’s 11-6 loss to South Alabama by pounding the Jaguars 14-7 on Saturday, leveling the big Sun Belt Conference showdown series. For the second straight day, Coastal got a poor outing from one of its talented starting pitchers, but this time the Chants were able to overcome that rough start by simply overpowering South Alabama. The Jaguars hit three homers, but Coastal hit two of its own and rapped out 12 hits, stringing together walks and hits in a three-run second and a seven-run fourth.

Coastal entered the day leading college baseball in doubles (81), while ranking second in walks (186), ninth in homers (41) and fifth in scoring (8.5 runs per game). Obviously, the Chanticleers have the offensive firepower and the plate discipline to bash their way to plenty of plenty of slugfest victories.

It starts with the pair of seniors anchoring the middle of the lineup. Burly senior first baseman Kevin Woodall has 12 home runs in the cleanup spot, and senior infielder Seth Lancaster now has 10 long balls after going deep three times in the last two games. All three of them were towering blasts to right field that rattled off the back fence behind the berm. After catching fire in the second half of 2016, when he finished with a .326 average and a .509 slugging percentage, Lancaster slumped to .250 with a .405 slugging percentage as a junior last year. Now he he has once again emerged as a force in the middle, hitting .320/.460/.672 and providing the lefthanded pop to complement Woodard’s righthanded thump.