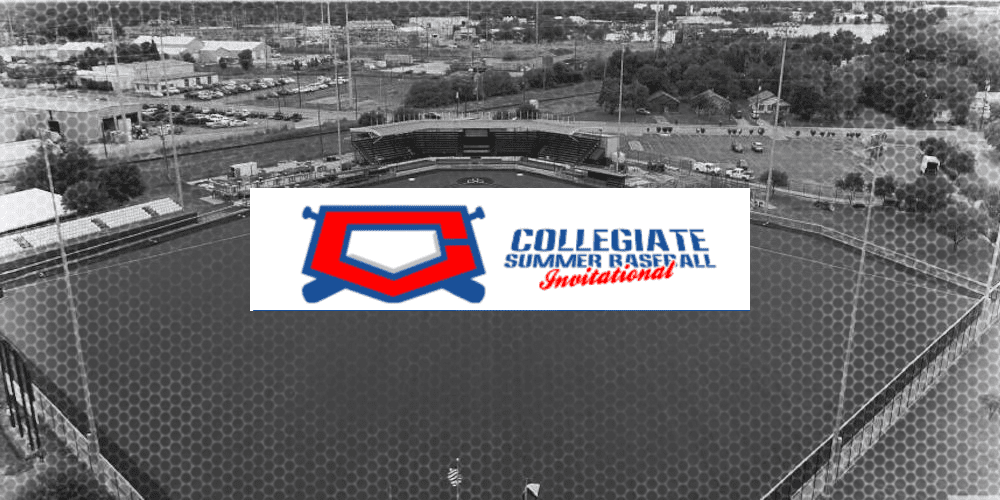 As some collegiate summer leagues continue to cancel or tweak their schedules, some have resigned to the idea that college baseball might be over until fall workouts or late in the summer at the earliest. However, that isn’t expected to be the case with the launch of the Collegiate Summer Baseball Invitational, set to take place in Bryan, Texas, June 4-6.

The CSBI is an invitation-only, four-team regional formatted tournament that will feature players from all over the country. The four teams will compete for three days of workouts before assembling rosters and playing in a weekend round-robin tournament that will include six games in three days. Though the event, which will support a non-profit organization, hopes to trim down overall rosters to 100 total players, demand for the event has exceeded expectations with the cancellation of the 2020 college baseball season.

“I think our biggest challenge is going to be giving the right players an opportunity and to make the right selection of 100 players. The demand outweighs the supplies in this case,” Uri Geva of Infinity Pro Sports said. “We’re going to be pretty selective. We’re not just going to take a bunch of local players from A&M or Texas, or something like that. We want players from all over.

“We could’ve done 200 roster spots and we’d be full,” he continued. “Other than showing up, there’s no cost to the players to show up and play in this event. Everyone is pretty excited about it and no one has said no at this point. This is a tournament that will be available to those players who are and aren’t draft-eligible at the moment.”

The CSBI is unable to release actual names just yet because of pending contracts but players from Texas Tech, Texas A&M, Penn State, Texas State, Dayton, Kansas, McNeese State, and many more, are expected to participate, with more brand name programs expected to be added to the list before the event in early June.

Clearly, the most important question people will have about this event is the health of every player, coach and umpire participating in the week-long event. Geva and the event stakeholders have a precise plan for COVID prevention, derived from Coronavirus Task Force public health expert, Dr. Anthony Fauci’s detailed plan for Major League Baseball.

The event, which has been approved by local health officials, has several safeguards in place to ensure safety for everyone involved.

First, players, coaches and umpires will arrive the Monday before the tournament. Everyone involved will have staggered arrivals and will immediately be tested for COVID-19 by health officials from Baylor Scott & White Health. The test results will come swiftly, and once the results come back negative, the players, coaches and umpires will be quarantined at a local hotel for the entire week. Food will be delivered to the hotel and players will not be allowed to leave unless part of the tournament shuttle to and from the ballpark/hotel. More safeguards are being put into place as well. For instance, even if you test negative for COVID-19, CSBI officials will perform mandatory daily temperatures and other medical checks to ensure the safety of the individual player and others.

The CSBI will utilize even more safeguards once at Travis Field, home of the Brazos Valley Bombers of the Texas Collegiate League. Players and coaches will enter one side of the stadium, while media and scouts will enter the ballpark through another gate on the other side of the ballpark. Scouts being attendance is another question mark at the moment. Currently, area scouts are allowed to contact draft-eligible players, but cannot scout/attend games. Players will not be required to wear masks after testing negative for coronavirus, but Geva admitted that the State of Texas could require the use of masks by the time the tournament arrives. However, the plan, for now, is not requiring masks by players or umpires.

The league is also trying to ensure safety for the players from an arm-care standpoint. With players being relegated to at-home workouts and such the past two months, Geva and other CSBI stakeholders want to make sure players are not risking injury. So, the CSBI will have mandated pitch counts and inning and appearance limits instituted, among other safety-related rules.

“All these players are beyond excited to get back on the field,” CSBI Director of Baseball Operations Brian Nelson said. “They missed their spring seasons and have been cooped up at home for a while now. But this is also why we have to be smart and extra careful about how we let the players re-enter competitive play. We are putting multiple rules and limitations in place to ensure physical safety. This is a free event and we want coaches and families to know that their players are being taken care of.”

The CSBI will be viewable by fans via an online streaming service. Details on the pay-per-view format and pricing will soon be available.

To say the last two months have been an interesting time for college baseball and society, in general, would be an understatement. But via the CSBI, at least there will be a shred of baseball normalcy headed our way in the Lone Star State in the near future.

That’s all we can ask for at this point. What do you think about CSBI playing in early June? Let us know in the comments below.