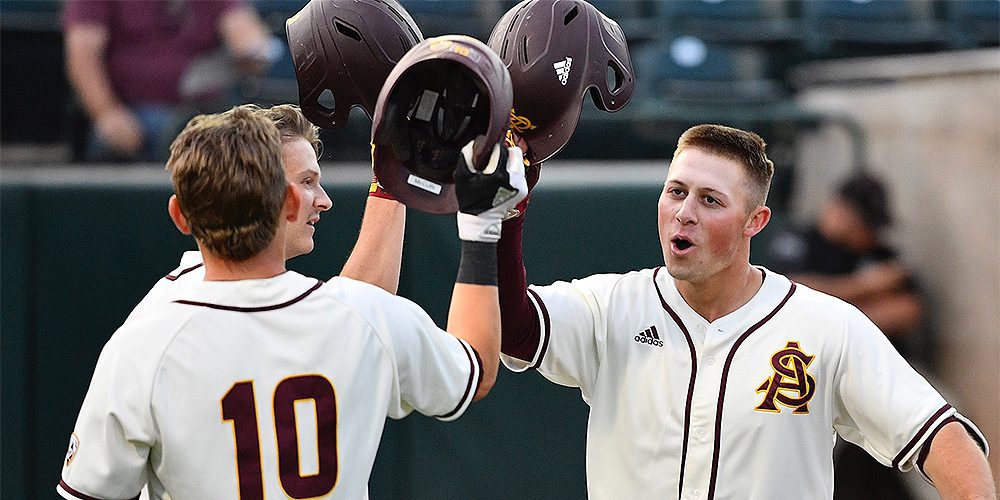 TEMPE, Ariz. — There’s not supposed to be a such thing as a rebuilding year at Arizona State. And as you walk through Phoenix Municipal Stadium and digest all the program’s accomplishments on billboards and plaques, it’s easy to see why there might already be some urgency with this young but talented Sun Devils club.

ASU head coach Tracy Smith was one of the hottest coaches in college baseball when he guided Indiana to the College World Series. He was going to be the missing piece of the equation that ultimately would put the Sun Devils back amongst college baseball’s elite. But after reaching the NCAA postseason his first two seasons, the Devils had a rash of off the field issues last season and Smith didn’t hide the fact his team lacked chemistry. It directly affected his team’s ability to put together any sort of consistency. Not only did ASU miss the postseason, it compiled an ugly 23-29 overall record with an even worse 8-19 mark in the Pac 12.

Fortunately for Smith and his staff, things were much different during fall workouts. The always honest head coach said the team chemistry was much better, and he could tell the players enjoyed going to the ballpark to practice. But how would his young Devils handle the first sign of adversity this spring? We found out Saturday as the Devils hosted Miami (Ohio). In the series opener, Smith praised Redhawks starting pitcher Nick Ernst, who had a performance to remember and showed electric stuff on the way to a series-opening victory over ASU. The Devils had limited offensive production, setting the stage for what was an important nightcap between the two clubs.

As an example of the kind of urgency this team has, the Devils came out of the gates a little slow from an offensive standpoint because they were pressing. Miami lefthander Zach Spears was in control the first three innings, his only blemish being a solo home run from ASU hard-hitting freshman Spencer Torkelson in the second inning. The pressure was evident.

“We’ve got a lot of young guys, and they wanted to get that bad taste out of their mouth,” Smith said. “I saw some things I hadn’t seen out of our hitters until that point. Our guys were pressing, and I’m looking forward to when our guys settle in and just play some baseball.”

The tide turned in the fourth inning when Lyle Lin and Torkelson hit back-to-back homers, both on 89 mph fastballs from Spears. ASU eventually pulled away in the sixth with a three-run frame on the way to a 7-3 victory.

It was a positive response to a rough series opener, and it was led by Lin and Torkelson, two guys who appear to be ready to make a significant impact this season.