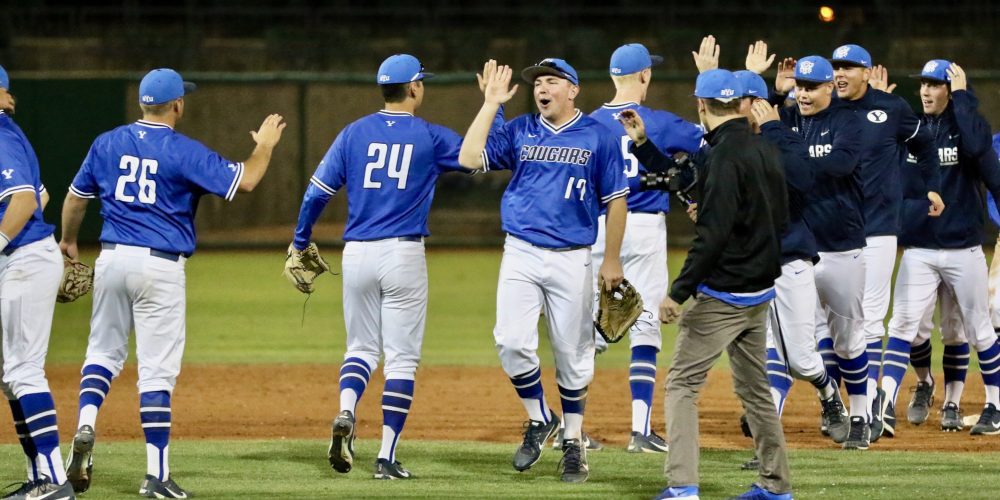 Buffo had allowed only three hits and one run through 8.1 innings, but Loyola Marymount had brought the tying run to the plate in Chavez after loading the bases with three straight singles. Buffo’s 1-2 fastball tailed back over the plate just above the knees. Chavez drove the ball toward Banner Island Ballpark’s Jackson Rancheria Back Porch. In front of the Back Porch, the wall is about 18 inches taller than the rest of right field. It was that 18 inches that saved Buffo from a game-tying grand slam.

Steven Chavez knocks in 2 runs as @LMLionsBaseball is now within 2 of BYU. Top 9, 1 out.

The ball clanged off the wall for a two-run double, ending Buffo’s night. BYU went to junior lefty Riley Gates. A pop out and wild pitch put the tying run at third base with two outs. Pinch hitter Joe Murray fouled off four two-strike pitches but ultimately lost the battle, watching the ninth pitch of the at-bat — a strike at the knees to give BYU a dramatic 5-4 win that eliminated LMU and advanced the Cougars to the championship round.

Last week, the Cougars dropped three straight at Gonzaga to lose an outright West Coast Conference title. They will get their shot at redemption in the championship round when they will face Gonzaga, who beat LMU earlier in the day Friday. BYU will need to beat the Bulldogs twice to take the title. 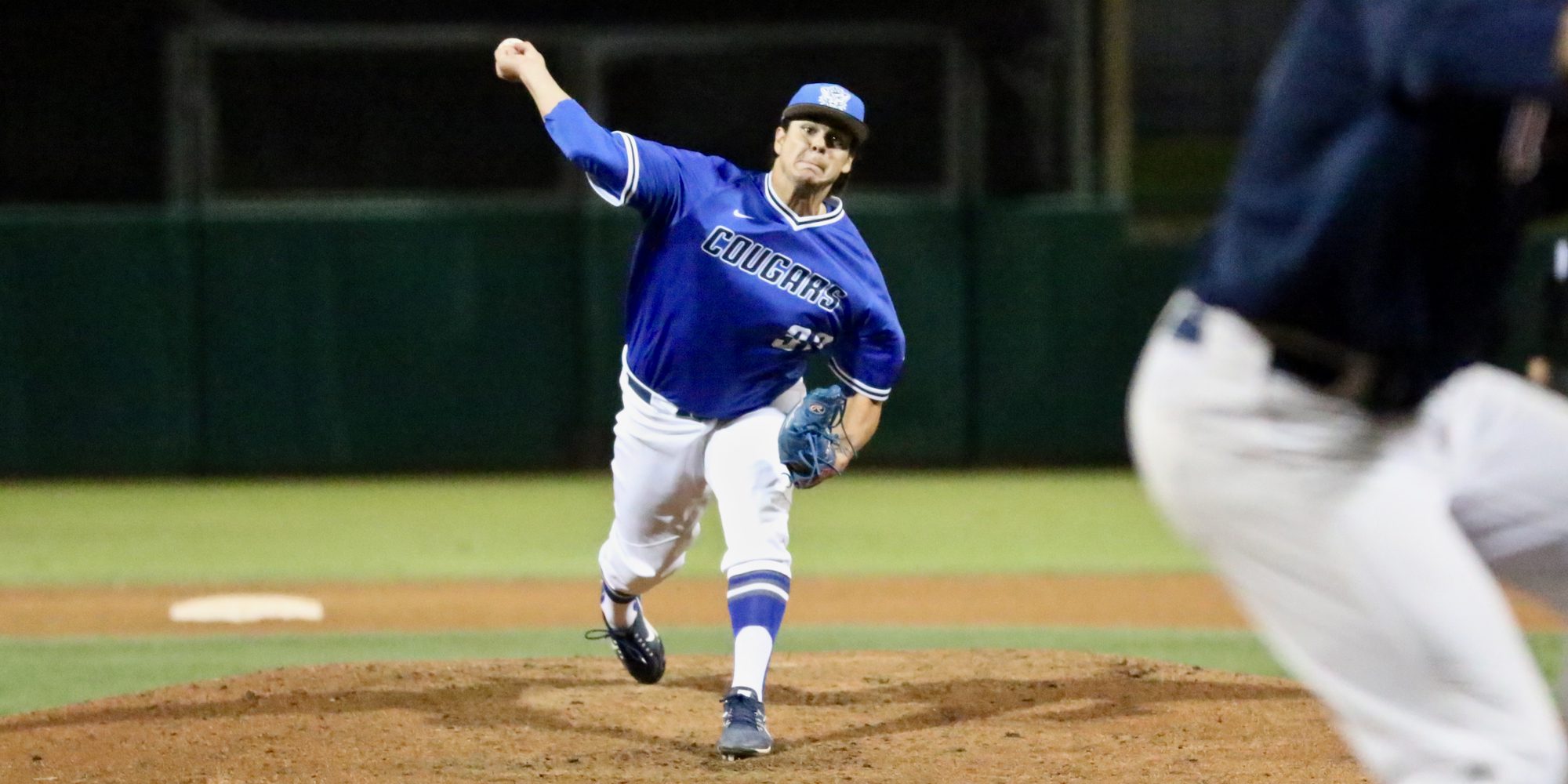 Maverik Buffo picked up the win for BYU. (Shotgun Spratling)

Maverik Buffo had been the Cougars’ ace all season, but after he gave up 15 runs on 14 hits in four innings his last two starts of the regular season, Littlewood chose to push him back in the rotation at the WCC Tournament. He chose Brady Corless in the tournament opener against LMU because the Lions hadn’t seen him during the regular season. (Corless sat out the week the teams played.) Then BYU used Hayden Rogers in their Friday opener against Saint Mary’s before using Buffo in the nightcap.

“For the whole year, Hayden has been our second best pitcher,” Littlewood said after the first win. “I think Maverik is our most experienced guy. We’re really sitting where we want to if he throws like he can.”

“Maverik was great for us,” Littlewood said. “He was showing his change, but I thought he was spotting his fastball really well and throwing just enough curveballs to keep them off speed. I think more than anything he had good velo. His energy was good. He had good pace and he was locating that fastball.”

Buffo said it was tough to let his team down the previous two weeks.

“It ate at me to sit there and know that I haven’t done my job the last two weeks. That was the biggest thing that made me want to work even harder,” Buffo said. “I needed to fine tune my stuff. I worked hard in bullpens and I went to coach and just said, ‘Whether you need me to start or relieve, I’m ready to go. I want the ball. I want to help the team.'”

In those bullpens, Buffo decided to speed up his motion. His mechanics had got off track in his last two outings, so he wanted to “flow with everything and let my arm catch up.” He got back in sync and the results followed, helping lead the Cougars to the tournament championship. 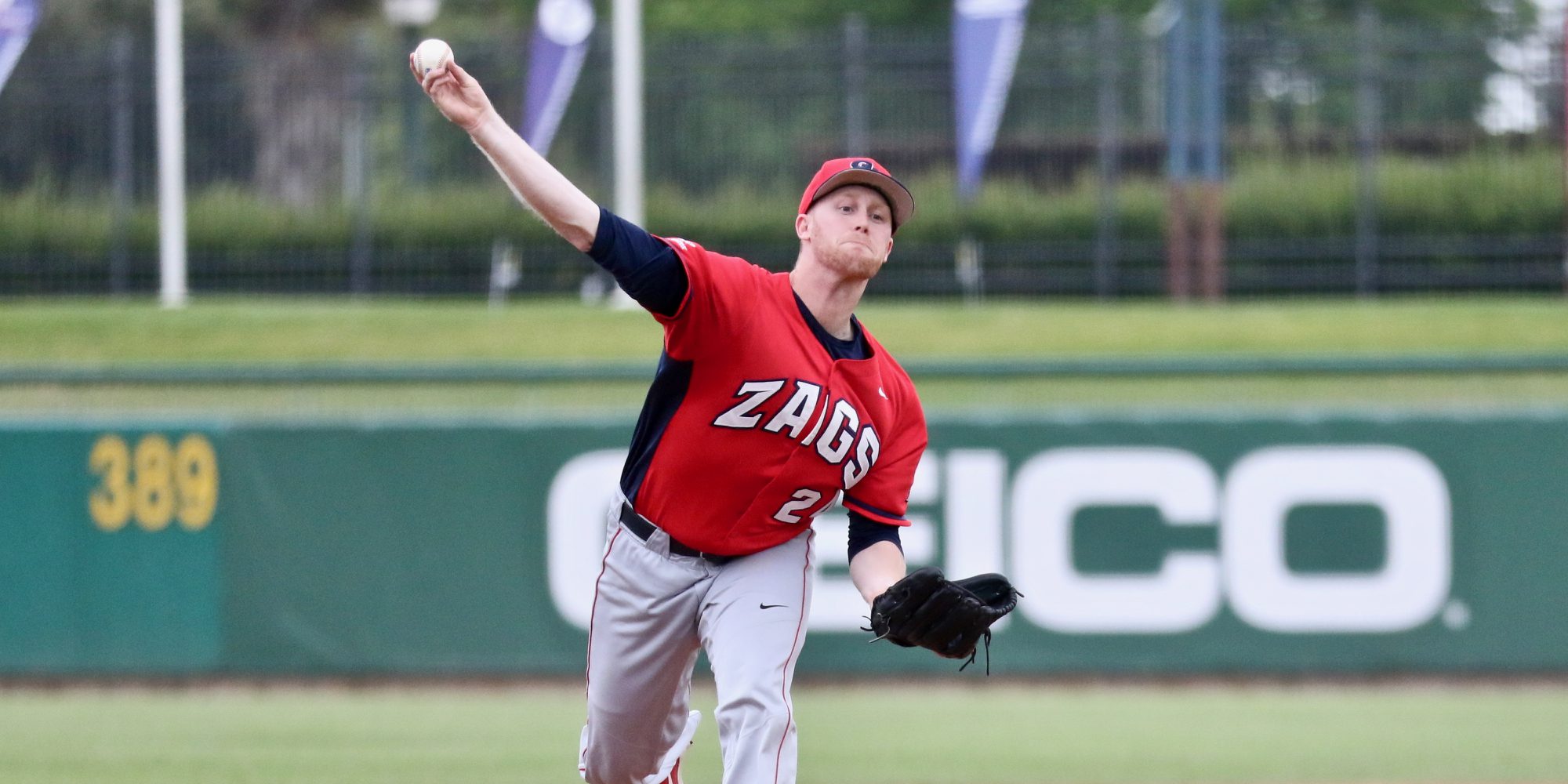 The winner’s bracket game of the WCC Tournament brought out 30-50 scouts. Everyone wanted to see WCC Pitcher of the Year Cory Abbott, who produced an unbelievable 8-0, 0.27 mark in conference play. Abbott has been one of the biggest midseason popup prospects ever, morphing from an average Sunday starter that struck out 17 in his first five starts of the season to an unhittable strikeout machine, including 16 strikeouts in his final regular season game.

Vernia baffled Loyola Marymount’s hitters and produced one of the best outings of his career on the biggest WCC stage. Vernia has always been a fastball-changeup pitcher and he was able to throw both pitches for strikes on both sides of the plate. But the biggest development was his ability to throw his curveball consistently.

“Today was probably the best I’ve thrown my curveball all year. Then mix that with my changeup and that was on as well,” Vernia said. “I think it opens up a lot more counts to throw it in.”

Vernia produced a masterful effort, spotting up his changeup in any count, including one sequence that saw him use a 2-1 changeup for a strike and then go back to it with a full count to get a strikeout. The pitch also improved from a pitch to keep hitters off balance to a diving, strikeout offering that had great depth and deception.

“Vern was outstanding,” Gonzaga head coach Mark Machtolf said. “That’s one of the best pitching performances in a big game that we’ve had. He threw his changeup. They weren’t seeing his fastball to righthanders. He was just outstanding. Hard to take him out.”

Both Vernia and Abbott allowed just one hit through the first six innings, but Gonzaga gave Vernia a 1-0 lead in the fourth inning when Abbott lost his momentarily lost his command. He walked the first two Zags and hit the next to load the bases. Abbott left a two-strike pitch up, allowing Jeff Bohling to hit a sacrifice fly. Abbott avoided any further damage with a fielder’s choice and one of his 11 strikeouts, but that run was enough with the way Vernia was commanding the zone.

In the seventh inning, Vernia got two quick outs before a bloop to right and a single to left put two on. Machtolf wasted no time strolling to the mound to make a switch, calling on closer Wyatt Mills. Mills got a groundout and Gonzaga scored two insurance runs in the eighth inning en route to a 3-1 win, but Vernia remained the story after the game.

“I don’t see him week in and week out, but I thought that was one of the best games in his lifetime,” Loyola Marymount head coach Jason Gill said. “I mean he didn’t miss up. Everyone of his misses was down and when those performances come on, I tip my cap to him because he knew who he was going against and he knew he couldn’t make a lot of mistakes and he didn’t. I could probably say that he probably missed above the middle of the thighs maybe three times all day. He did a heck of a job. I can’t say enough about his performance.”

If Saint Mary’s had won the early game on Friday, head coach Eric Valenzuela was planning to have junior righthander Drew Strotman start the late game. However, with the Gaels trailing, all plans were thrown out and Valenzuela tried to piece together a victory any way he could. That included using Strotman in relief.

Trailing 7-4 after scoring twice in the eighth inning, Strotman trotted out of the bullpen. When scouts saw No. 37 headed for the mound, they all flocked back behind the plate from areas all around the stadium. Strotman flashed a 92-95 fastball and ended his inning with his hardest pitch, striking out a hitter on a 96-mph heater.

After being a low scholarship guy coming out of high school, Strotman grew into a valuable reliever last season (3-5, 3.96), but he struggled to take on a bigger role early this year (6-1, 4.50) even though Valenzuela saw the talent. But Strotman continued to make strides through the season and when he started consistently showing mid-90s heat and a slider at 85, he worked his way into the rotation. Strotman came on down the stretch run, moving into the rotation on Sundays and punctuated the regular season with a 14-strikeout effort against Santa Clara.

“I mean he’s grown,” Valenzuela said. “You talk about an undrafted kid out of high school. To come in three years later, put on some weight and just get extremely better in all aspects of it. He’s really good.”

But Valenzuela thinks Strotman hasn’t even scratched the surface of his talent.

**Winner Take All (if necessary)