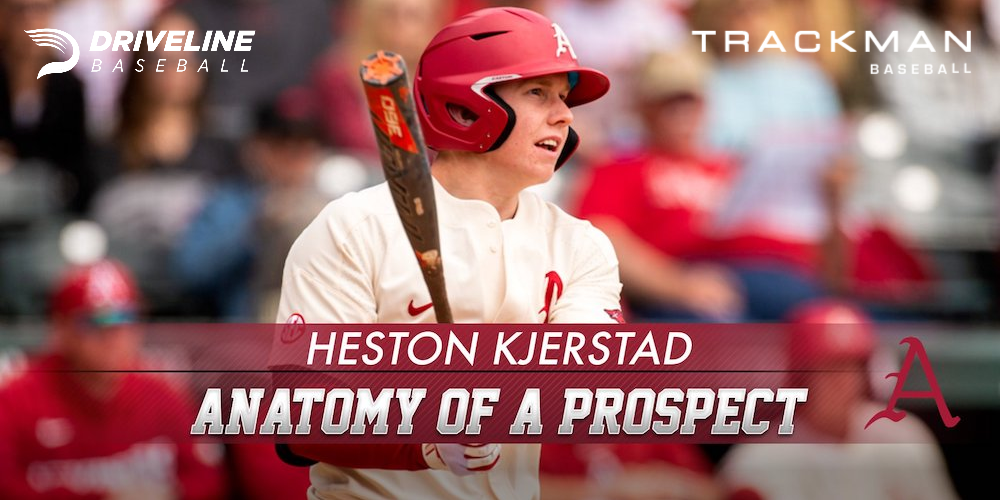 These periodic deep dives into college baseball’s premier prospects is a key component of our partnership with Driveline Baseball. Check out everything they have to offer, here.

Thanks to our partners at TrackMan for providing the data that made this feature possible.

In this Driveline player profile, we’ll walk through Kjerstad’s resume and how he best profiles at the next level.

Kjerstad first caught Arkansas head coach Dave Van Horn’s eye playing in a high school tournament at Dallas Baptist University and Van Horn must have felt like he was playing with house money right from the start. The Amarillo Randall High School graduate started his Razorback career off hot, being named an All-American as a freshman and  amassing 6.8 WAR, giving him the highest Freshman year WAR on record in our newly unveiled NCAA WAR Dashboard (link here to the dashboard), a database containing 5531 of 5686 qualifying player seasons (players seasons with 150+ AB’s from 2017 on).

Kjerstad flashed well above-average power out of the gate, crushing his first home run in his fourth career start against Arizona (2/21/2018), and placing 12th in the SEC in ISO (2nd on Arkansas with a 0.221) among qualified batters during his freshman year. He also ranked 15th in the country in OBP, pairing a slightly below- average 8.3% BB% (2018 SEC Average among qualified batters was 10.6%) with an exceptional .332 BA (.365 BABIP). He mirrored this production over another 60-odd games his sophomore year, putting up near identical wOBA and WAR Values and upping his ISO to 0.248 (11th in SEC).

(Hard Contact here is defined as 95+ exit velocity readings, with Medium Contact falling between 75 and 95 and Soft Contact representing all the batted ball events under 75mph)

Kjerstad has shown a nice mix of batted ball types — his 2019 23.7 LD% would have ranked in the top 30 among qualified MLB hitters (with his 37.8 FB% pacing the top 60) — along with plus power to all sides of the field, as outlined above (Kjerstad himself has mentioned it as “his biggest strength”). The consistent productivity (Kjerstad never went three consecutive games without a hit) and well-roundedness of his hit tool already had Kjerstad on draft boards but his pandemic-shortened junior season really allowed him to put his statistical mark on the conference leaderboard. 2020 saw him place 3rd in the SEC in wOBA, 8th in ISO, and 3rd in total WAR at 2.0 through 16 games. While Kjerstad’s more pedestrian 9.0 percent walk rate (although paired with an improving 11.5% K rate) was again one of the few statistical indicators that didn’t find itself in company with the best hitters in the league,  he still managed to record a hit in all 16 games (albeit, all non-conference games) of the 2020 season.

The 6-foot-3, 215-pound Kjerstad hasn’t profiled as much more than an average baserunner or defensive player, averaging ~1 BsR runs above average and anywhere from 0 to -1 defensive runs below average with our UZR NCAA estimated figures (scouting reports have also mentioned his average speed and unnoteworthy defense). Nevertheless, these contributions have paled in comparison to his offensive potential and his outcome-based production (which has shaken out to around a 150 wrc average through his first two seasons before soaring to an outsized 244 figure in 2020), which has been large enough to convince many scouts that Kjerstad is one of the highest upside hitters in this year’s draft. His career has come with all the necessary trappings and befitting adornments as well — he followed an SEC Freshman of the Year designation, a 2018 All-Tournament selection (on the way to leading Arkansas to the 2018 College World Series) and two back to back second-team All- SEC nominations with a summertime spot on the Team USA College National Baseball team, leading the team with a .395 batting average and 28 total bases. His plate discipline has often been the only constructive criticism cited, with his own coach Van Horn, stating: “strike zone awareness and staying in the zone when [Kjerstad] swings .. would [lead to] a huge jump. If he can do that, it would be big. Basically, flip those walks and strikeouts.”

The left handed batting, right handed fielding Kjerstad has shown plus power to multiple areas of the field according to TrackMan, recording max velos of 100+ and average velos of 90+ to most every spray range available to him, with the exception of the most extreme oppo-field angles: 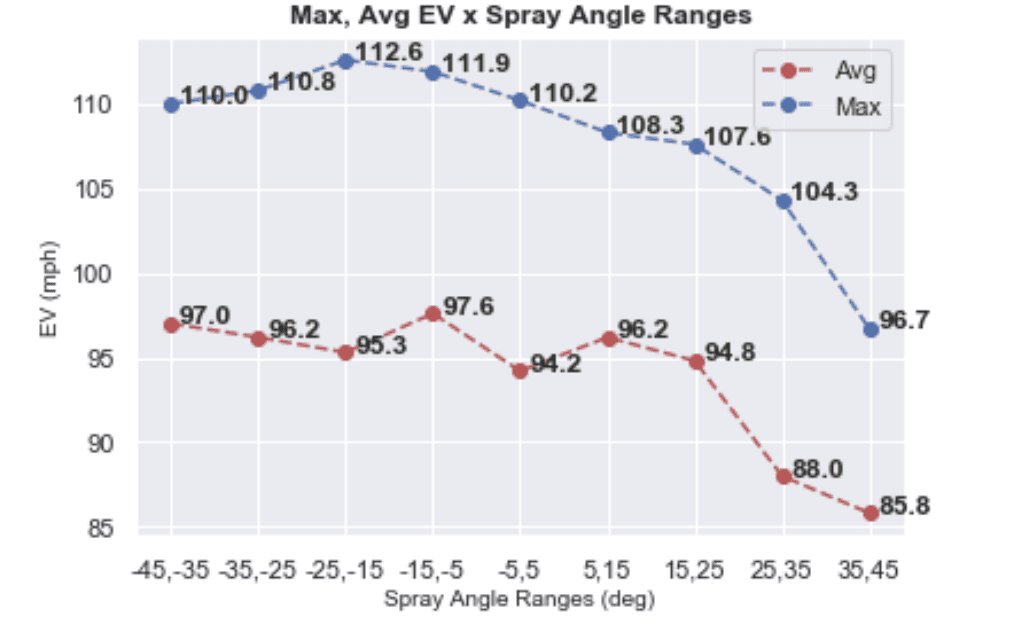 In addition, the average launch angle of his hard hit balls (defined here as his top 8th hardest hit balls, a sabermetric indicator strongly correlated to talent) sits just under 17 degrees, indicating that Kjerstad possesses a healthy uppercut swing found to be in line with some of the most productive batted ball combinations at the major league level (hard hit balls between 16 and 24 degrees produced a 0.883 wOBA in the MLB 2019 season). Kjerstad’s aggressive and contact-happy swing also comes with healthy attack angle estimates (11 degrees in 2019, 16 in 2020) and MLB -average bat speed estimated figures (his 72-73 mph bat speed would put him around the 50th percentile rank of the same set of MLB qualifying player seasons). His above-average bat speed and plus bat to ball skills have led to plenty of flush barrels over the course of Kjerstad’s career. His top 8th hard-hit ball exit velocity shook out to around 107.6 over the course of his whole career, a number that would have ranked in the 80th percentile for the 2321 qualified major league player seasons in the Statcast era (2015-2019) — albeit one that does come with an aluminum bat, which can pad exit velocity readings by 2-3 mph. The man can make hard contact, and lots of it —  he upped his already impressive 10.8 Barrel % per Batted Ball Event in 2019 to an eye-popping 17.9% in 2020 (would rank 5th  out of 250 MLB qualified hitters last season) an extremely strong indicator of success at the major league level.

As mentioned above, Kjerstad’s swing decisions have provoked some feedback across the industry and are often seen as the root cause of his higher than ideal K%’s throughout college; Dan Zielinski with the Baseball Prospect Journal puts it simply, stating that Kjerstad “is an aggressive hitter, which leads to strikeouts at times” and Kjerstad himself admits that he’s “still really focused on [his] plate discipline.”

Pairing his aggressive uppercut swing with an as-ambitious approach, Kjerstad swings at roughly 50% of the pitches he sees (a mark that would land in the ~74th percentile in MLB, min 100 plate appearances) and chases nearly one out of every three pitches that are thrown to him outside the zone.

While a chase rate (or O-Swing% in the table above) of 33% may not stick out too much at the MLB level in 2019, where the average velocity faced is 4-5mph harder and the off-speed pitches are a bit more enticing, the number is quite high for college, particularly for a likely first round selection. 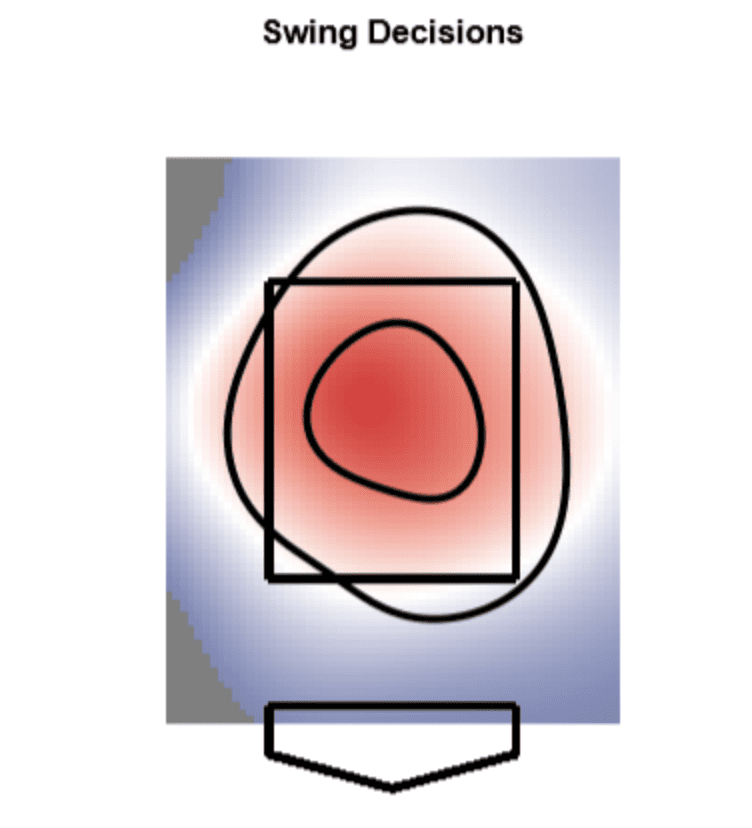 While his plus bat-to-ball skills and bat speed relative to the typical NCAA batter have helped mask these aggressive tendencies at Arkansas, improving his discipline on pitches above and below the zone should be the main point of emphasis for Kjerstad moving forward –we have his swing decisions costing him 4 points of wOBA per pitch (12th percentile in MLB) and believe it to be his main weakness at the plate. 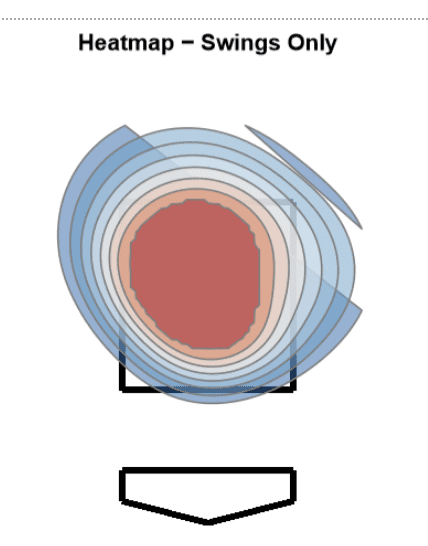 Despite having the statline and uppercut stroke of a premier left-handed, dead-pull power bat, Kjerstad pairs impressive plate coverage (as indicated by his nitro-zone being up and away rather than down and in) with a unique swing and approach that generates power to all fields. With above average bat speed that will only improve with age and an aggressive, consistent upper teen (~17 degrees) hard hit launch angle that has propelled him near the top of  the country’s offensive leaderboard across the last few years, Kjerstad’s underlying metric suggest he is one of the best pure hitters in the draft.

At his ceiling, Kjerstad takes full advantage of his plus hit tool in pro-ball by limiting his strikeouts and becoming a bit less eager to chase pitches above and below the zone. If everything comes together with his swing decisions, this is as well-rounded of an offensive profile you’ll find at the amateur level.

In 2017, Kjerstad went in the 36th round of the draft to the Seattle Mariners — this time around the Mariners and any other opportunistic teams willing to buy in on the high-upside slugger flashing a heavily improved K% will likely have to pounce around 35 rounds earlier.