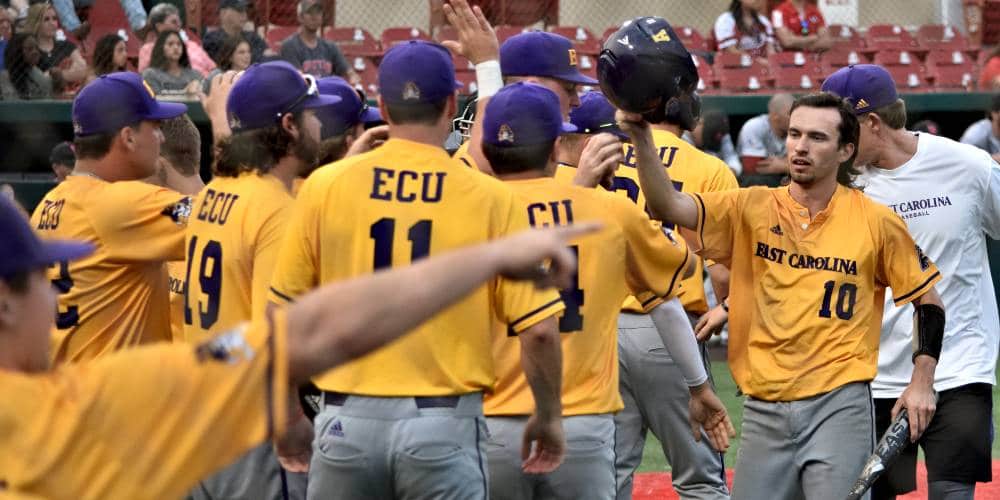 HOUSTON — Through the first six innings against Houston in the series finale on Saturday, it seemed like much hadn’t changed for East Carolina.

Yes, the Pirates carried a 10-game winning streak into their series against the Cougars. But the Cougars, their nemesis in the American in the Cliff Godwin era, were doing their thing yet again.

With the series on the line, Houston, who’s looking for answers in any possible way, sent lefthander Clay Aguilar to the mound. Aguilar hadn’t had much success as a weekend starter. His last start against Lamar, he was lifted after allowing four runs in just 2.2 innings. But against the Pirates? He threw six shutout frames to begin the game and the Cougars were clinging to a narrow 1-0 lead heading into the latter innings.

It looked like déjà vu all over again for the Pirates, who hadn’t won a series against the Cougars in Houston in the Godwin era and were 1-10 in their last 11 against UH before the weekend.

But this ECU team is different, it’s versatile, and it found a way to not only knock Aguilar out of the game with a two-run seventh inning to take the lead. It added an insurance run an inning later and preserved a 3-1 victory over the Cougars, giving ECU yet another series win and giving them 12 wins in their last 13 games.

“I’m not sure I’ve been prouder of a group than I am with this one. To come out here in Houston, where we’ve historically have not played well, it’s good. We’ve never won a series here since I’ve been the head coach,” Godwin said after the game. “It’s just always a tough place to play for us. So, to be able to take two games against what I think is a pretty good club, I’m super proud of our guys.”

Check out the rest below!