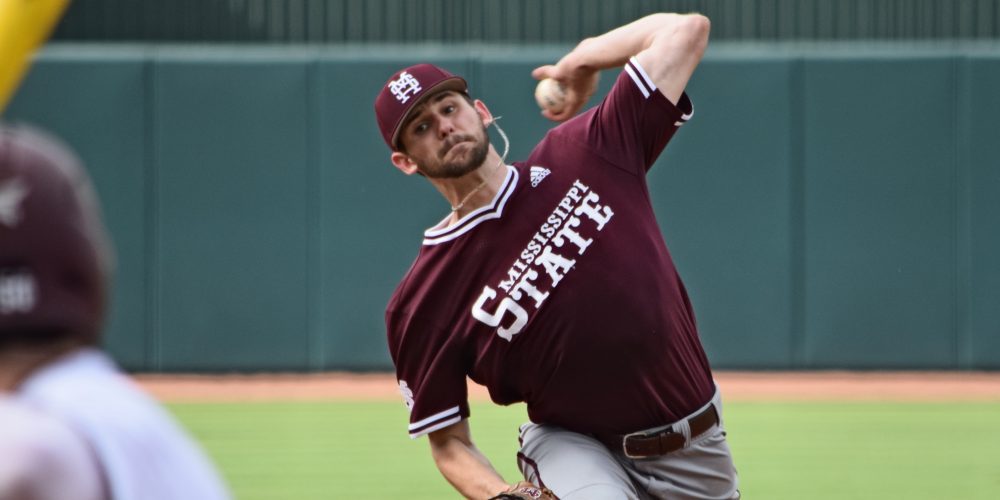 COLLEGE STATION, Texas — Ethan Small had a feeling today was going to be a good day.

Mississippi State and Texas A&M had the series opener between the two teams postponed Thursday night because of weather. The opener was going to feature Texas A&M’s John Doxakis against MSU righthander Keegan James. But the pitching showdown everyone wanted to see was Doxakis vs. red-hot Small. Well, Mother Nature intervened and made sure fans and observers alike got their wish.

In the minutes leading up to first pitch Friday afternoon, Small, the 6-foot-3, 214-pound, junior lefthander went through his warmup pitches in the bullpen beyond the right-field wall at Blue Bell Park. Typically, he feels good. Today, he admits, things felt really good. His stuff was crisp, the ball was coming easy out of his hands and he sensed more velocity than usual on his fastball.

“I felt pretty good in the bullpen today. I felt like the ball was coming out a little more live than normal, and I think I have the heat to thank for that,” Small said after the game. “I just kind of felt looser out there in the pen, and I had all three of my pitches. I had a lot of confidence going into this start. I was just sticking with the he heater and changing it up after that.

Small’s hunch after his bullpen session proved right, as he carried a perfect game bid into the seventh inning, and his team a no-hit bid into the eighth inning in a 4-0 dominant win over the Aggies.

“I thought his stuff was a little better than normal today,” Mississippi State coach Chris Lemonis said. “I thought his velocity was better and he had great command early on. He just went out there, worked both sides of the plate and dominated.”

〈
Previous Article Soularie Impacts Vols With His Bat — And His Presence
Next Article No. 1 Bruins Continue to Find Ways to Win
〉