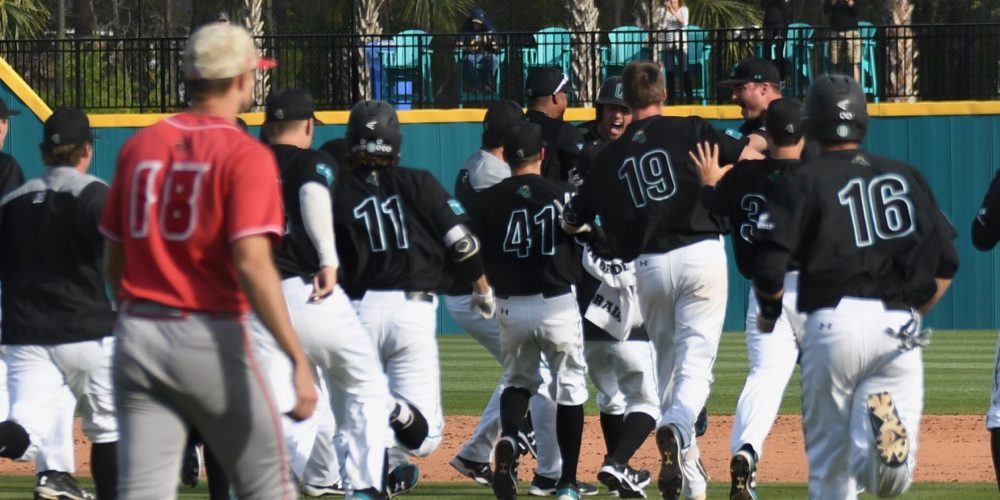 CONWAY, S.C. — Gary Gilmore had been waiting all spring for a win like this.

OK, maybe not exactly like this — he could have lived without the five errors his Coastal Carolina club committed Saturday, or the five walks it issued, or a couple of other mental mistakes that helped UL Lafayette build an 8-5 lead heading into the ninth. At that point, facing a three-run deficit with Cajuns all-time saves record holder Dylan Moore taking the mound, the Chanticleers looked just about down and out, on the verge of losing this first Sun Belt Conference showdown series against the league’s perennial power.

But just like they did in a midweek loss at North Carolina a couple of weeks ago, the Chants fought back in the ninth. Their rally fell just short in a 7-6 loss in Chapel Hill, but on Saturday they completed the comeback, earning a thrilling 9-8 victory on freshman Cory Wood’s walk-off two-run single in the ninth.

It wasn’t a pretty win, but it was a very important win, and the positive qualities it revealed outweighed the blemishes.

“We have gotten into this position three or four times against a couple good clubs and have failed. So this was huge for us makeup-wise, to know that we can do this,” Gilmore said. “We played bad — five errors, that’s bad — but we hit a little bit today.

“This team so desperately needed not only to win but to win in a fashion where you’re in despair, you’re basically going, ‘We’re going to lose this game,’ and you go completely from one emotion to the other. We’ve been in that position several times when we’ve worked our way back but haven’t been able to complete the deal. To be able to complete it against a great team like that was an incredible thing, to see them continue to compete, have confidence and a little swagger.”