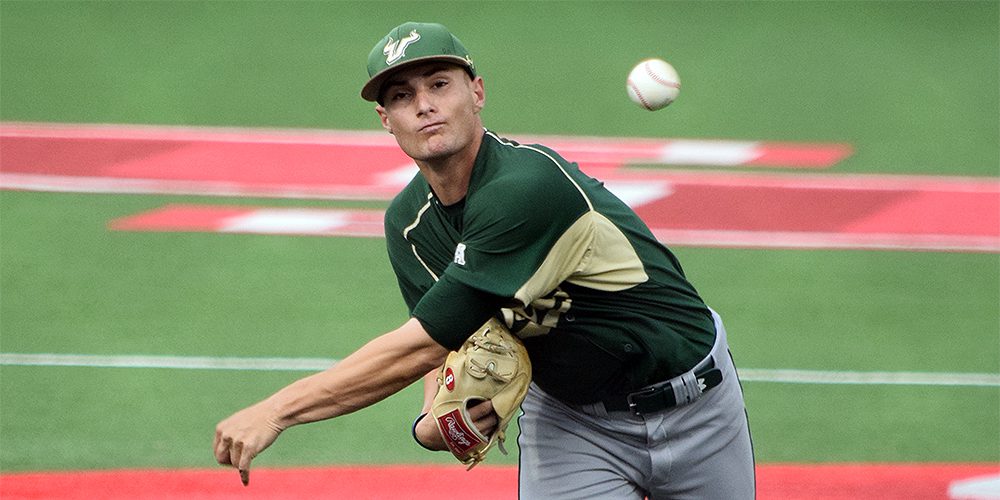 USF's Shane McClanahan might have the draft's most electric arm. (Kendall Rogers)

HOUSTON — It’s hard to imagine how good South Florida junior lefthander Shane McClanahan could be when he fully develops his secondary stuff.

We’ve marveled at McClanahan’s fastball velocity over the past year. As we saw Friday night in USF’s 9-6 win over Houston, he holds his velocity quite well. He was up to 97 in the early innings against the Cougars, and was still hitting 95 on the radar gun as he eclipsed the 100-pitch mark. But while that fastball is a special pitch for McClanahan, he knows he needs to continue to develop his secondary offerings if the Bulls want to make noise at the end of this season, and if he wants to make a quick move through the professional ranks to the big leagues.

McClanahan faced this same Houston team just last season.They touched him up for four runs in 6.1 innings. Certainly not a horrible start by any means, but Houston coach Todd Whitting remembers his offense seeing McClanahan well that day, and his secondary stuff not being particularly overwhelming.

That wasn’t the case this go-round. McClanahan was in charge.

The Cougars were ready for the fastball. The first two hitters in UH’s lineup, Connor Hollis and Jared Triolo saw his fastball well in the first inning. McClanahan immediately made the necessary adjustments, relied more on his secondary stuff the first few innings and looked like a prospect you could see a team taking in the top five picks.

He was that good.

“I thought he was really good. That was top half of the first round stuff that I saw,” Whitting said. “We got to him pretty good last year, but the changeup was the difference for him tonight. He kept hitting that low and away spot with the changeup and it’s still coming at you at 88 mph. It looked just like a fastball and it just disappears at the plate.”