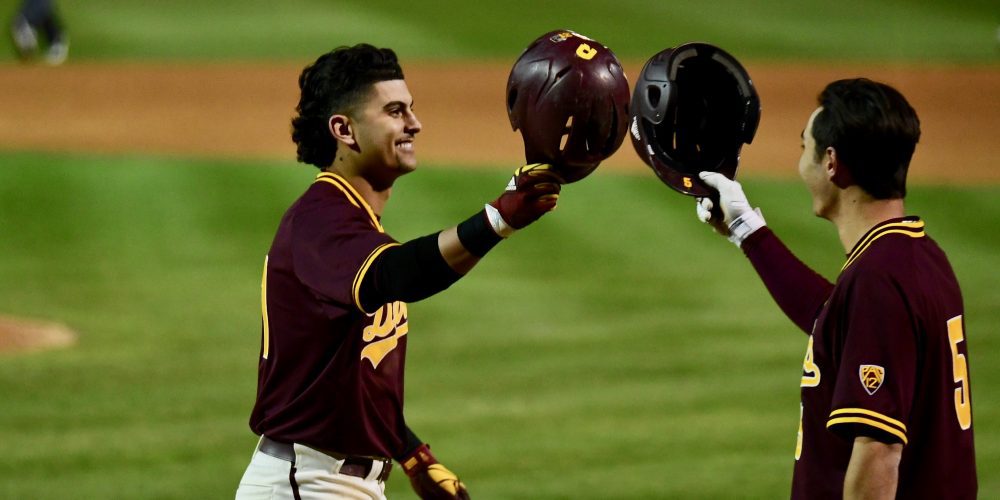 Fitt: Beware Of The Sun Devils

PHOENIX — After Notre Dame took a 5-3 lead in the fourth inning Saturday, Arizona State junior outfielder Carter Aldrete had a chat in the dugout with hitting coach Mike Early.

“I was like, ‘All right well, do you really want to hit with us the rest of the game, or are you guys gonna bring in someone that’s gonna stop us?’ He kind of looked at me and goes, ‘Ain’t nobody stopping us.’ And I kind of just shook my head and said, ‘Yeah I know, what’s three runs?’” Aldrete said. “And sure enough, we got a seven-run inning followed by a six-run inning. I mean, 30 runs in two games is pretty impressive in my book.”

The way the Sun Devils were swinging the bats early in the game, it felt like only a matter of time before their offense exploded, and that’s exactly what happened. That seven-run outburst came in the fifth inning — Aldrete capped it with a two-run homer to left. One inning later, the Devils put up the six-spot, capped by a three-run Aldrete long ball to left, en route to a 20-7 blowout victory, one day after a season-opening 10-1 win.

“Well I’ll tell you what, it feels like we hit every inning,” Aldrete said. “Me and (Hunter) Bishop were talking about it in the dugout, it was like, ‘Oh, it’s the seventh. Oh wait, I’ve got five at-bats already.’ You can never count innings out. Even the bottom of our lineup, they make a good transition to (Trevor) Hauver at the top, and once Hauver gets up, it could be double-double-double-double-double. You could be up at any point in the game, so that’s kind of something you’ve got to stay focused with, because you look up and Hauver’s hitting, next thing you know I’m on deck hitting fifth. Lyle (Lin) golfs a single into left, I never thought I was hitting this inning. It just makes you feel like you’re always having some effect on the game because you’re always hitting.”

It won’t always be this easy, of course — ASU is locked in, white-hot, and facing a cold-weather team in February. But make no mistake: this Arizona State offense is real — and it might end up being spectacular. ASU coach Tracy Smith and assistant Ben Greenspan both said independently before the game that this offense is just as good as — or maybe even better than — their 2013 Indiana team that went to the College World Series. That’s high praise, because the ’13 Hoosiers were loaded from top to bottom, led by All-Americans Kyle Schwarber, Sam Travis and Dustin DeMuth.